War in Ukraine could add to negative earnings outlook for paper and forest products industry, according to Moody’s 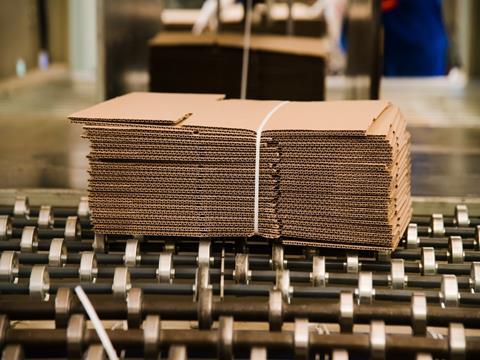 According to Moody’s, the paper and forest products industry’s EBITDA will decrease by 10-12% over the next 12 months, with significantly higher energy, transport, material, and labour costs counteracting most of the growth offered by high demand in the paper packaging segment. Russia’s invasion of Ukraine is expected to exacerbate pressure on costs and demand, especially for energy.

A decrease in earnings across regions

Moody’s follows the EBITDA (earnings before interest, taxes, depreciation, and amortisation) of 41 paper and forest product companies globally. The company predicts that these companies will experience a decrease of between 10 and 12% in EBITDA over the next 12 months, with companies in North America, Europe, and Latin America all likely to be affected.

In North America, the region accounting for over half of the companies rated by Moody’s, will see a slightly higher decline that the overall average – between 14 and 16% across the year-long outlook period. While North American corrugated packaging companies like International Paper and consumer paper packaging companies like Graphic Packaging will see a growth in earnings due to price increases in their sector, wood and pulp companies are likely to see a decline with prices dropping below those of the previous period.

Meanwhile, Latin American producers will see a much smaller decrease of about 4% over the next 12 months, according to Moody’s. Pulp prices are also predicted to be lower in the region. In particular, prices of bleached eucalyptus (BEK) pulp that can be used in kraft paper will reportedly drop by 10% in 2023 after peak levels were reached in mid-2021. Moody’s adds that domestic demand for paper products will be relatively flat in the region, while logistical costs will increase and further cut into profits.

Moody’s says that European producers, like Latin America’s figures, will see a 4% fall in EBITDA in the next year. Earnings from paper packaging companies are expected to be offset by declines in commodity paper, market pulp, and wood products, contributing to the overall fall in earnings.

In Europe, Moody’s notes that paper packaging companies like Smurfit Kappa and Metsa Board will benefit from stronger paper packaging prices, but escalating costs will partially undermine earnings in this segment. Cost inflation could also drive down earnings for non-integrated European paper and tissue producers, such as Fedrigoni, Moody’s adds.

Paper packaging represents about 29% of global operating income for the companies surveyed by Moody’s and, for the 16 rated companies primarily working in this sector, earnings could increase by around 6% over the next 12 months. Therefore, packaging demand provides some companies with the opportunity to offset earning declines.

According to Moody’s, demand for paper packaging will be guided by plastic substitution and the ongoing growth of e-commerce. In Europe, for example, some countries have acted to ban plastic packaging for fruit and vegetables; France began implementing such a ban for some fresh produce in January 2022, while Spain is expected to follow suit in 2023. Online sales are also estimated to reach 22% of all worldwide retail sales in 2023.

Demand for food-grade consumer paper packaging has also experienced a recent resurgence as countries recover from the ongoing impacts of the COVID-19 pandemic, Moody’s says. The company expects that packaging grades used in foodservice, such as those used for takeaway beverages like coffee, will see a rise in demand, while demand for at-home food and drinks grade paper-based will settle after the spike associated with COVID-19 lockdowns.

Across 2021 and in early 2022, Moody’s adds that packaging price increases were implemented for a number of grades and regions to offset growing input and freight costs. In Europe, Moody’s predicts that testliner and linerboard prices will rise by about 15% this year, compared to 2021 levels. For consumer packaging, price increases could reportedly be as much as a 10-18% increase from last year’s figures.

Similar price increases for packaging grades are expected across other regions. For example, North America’s kraft linerboard prices could see an 8% increase over the next 12 months, according to Moody’s.

As previously noted, these price increases in various regions, but particularly Europe, could help some paper companies to build resilience in the face of industry-wide challenges. In a previous report, Moody’s noted that companies are increasingly shifting to packaging applications to remain profitable as demand for other products, like newspaper, falls and input costs escalate.

Supply is where challenges are most evident

While the growth trend for packaging looks likely to continue, Moody’s warns that rising prices will undercut this overall, with challenges expected to persist across the supply chain.

The emergence of the Omicron COVID-19 variant in late 2021 caused disruptions in mills and converting facilities as employee sickness rates jumped and quarantine and social distancing rules were re-introduced or tightened, Moody’s explains. This was apparently most evident in more labour-intensive converting facilities, while primary paper mills generally experienced fewer disturbances.

The wider COVID-19 pandemic has contributed to longstanding and worldwide logistical disruptions. Staff shortages in ports and unloading facilities have been a major challenge, resulting in the backlog of ships, while freight routes underwent changes to accommodate COVID-19 response efforts, such as the global distribution of personal protective equipment (PPE), and the economic slowdown as the world entered lockdown.

Even as economies made an unexpected economic rebound after the initial outbreak of COIVD-19, challenges including a lack of shipping containers, trucking shortages, and freight delays and backlogs remain, generating tensions across multiple supply chains. While there was some hope that these backlogs could be cleared by the end of this year, the uncertainties introduced by China’s COVID-19 outbreak in the context of its Zero-COVID policy have led some analysts to warn of another supply chain crisis presenting in the coming months.

In addition, new rules in the EU will now require trucks to be returned to companies’ headquarters every eight weeks, while drivers are expected to return to their country of origin every four weeks. Moody’s suggests that this could further aggravate driver shortages in Western Europe and contribute to further delays for road deliveries. Therefore, according to the company, freight costs will remain elevated overall because of the accumulation of these supply chain challenges.

Last Friday, the 112-day strike at UPM’s paper mills in Finland came to an end as a settlement was reached between the union and the company. FINAT, an organisation representing the label industry, warned even before the resolution that supply chain disruptions linked to the strike would continue even if it was resolved earlier. Nonetheless, this could help to ease some of the labour and supply challenges facing the paper industry and its downstream partners, such as print and labelling companies.

As for material costs, Moody’s expects that these will be more level, with fibre costs in particular – representing around 30% of total cash costs for companies in the packaging sector – remaining flat. The cost of recycled fibres, which are used in the production of recycled paper packaging, may be more volatile, the company warns, although this aligns with prior periods.

Moody’s notes that backwards integrated paper packaging producers are generally less exposed to increasing energy costs because they are able to produce a large share of their own energy through combined heat and power production processes. This would include companies such as Sappi, Stora Enso, and UPM.

Production capacity will also increase for some segments in 2023. For example, Moody’s estimates that approximately 3.8 million tonnes of new European containerboard capacity will begin in 2023, which could mean that supply will far exceed domestic demand. To balance the market, companies in this sector will need to rely on exports.

Further volatility as the war in Ukraine continues

As Moody’s outlines, energy, chemical, freight and labour costs are expected to remain elevated for at least the first half of the year. Specifically, freight and energy costs reportedly represent around 20% of total cash costs for companies and, Moody’s claims, will be high over the next 12 months.

“The direct effects from the Russian invasion are relatively small, but the indirect implications are significant,” Moody’s adds. Following the invasion of Ukraine by Russia, energy prices – which were already elevated – have escalated further, which is likely to have a ripple effect on energy-intensive industries like paper packaging production.

Moody’s says that oil prices are currently trading over $100/bbl, while supply and demand are incredibly volatile. According to ICIS, Russia exports 4.5 to 5 million barrels a day with approximately a half going to Europe. However, the EU is aiming to transition away from its dependency on Russian oil and gas as it enforces sanctions on the country, although this will be a gradual process with complete separation not expected until at least 2030.

Some countries may be able to offset the loss of supply from Russia more quickly by turning to other options like coal, nuclear energy, and renewables, but landlocked countries or those without large ports do not have as much flexibility in sourcing alternatives. As for companies, those that can generate their own energy, such as integrated virgin mills, will fare better, Moody’s suggests. This could produce regional differences in resilience, as around 65% of North American containerboard mills are integrated virgin mills compared to only around 20% of European mills.

Therefore, Moody’s expects that high energy costs will persist for the paper and forest products industry at large as the war in Ukraine continues. Alongside this, the company predicts a rise in paper packaging prices to offset these additional input costs.