How is Russia’s invasion of Ukraine impacting the packaging industry? 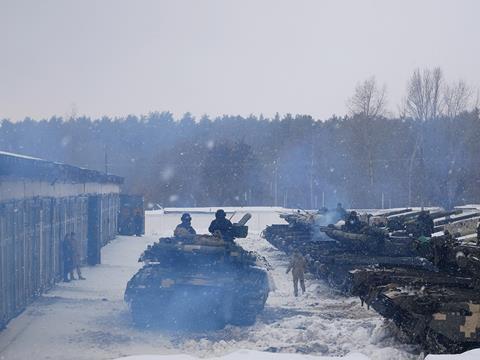 The full spectrum of medium and long-term consequences of the Russian invasion of Ukraine on the packaging sector is not yet entirely evident but is likely to be far-reaching. The war has already had an immediate impact on the industry by raising the prices of raw materials and affecting the way that businesses are able to operate.

Various operations have been suspended in Ukraine and businesses are halting their production and sales in Russia, while others report continuing to monitor the situation before announcing their next steps. Meanwhile, crude oil, natural gas and naphtha have reached new highs, which has also been the case for aluminium.

Oil and gas prices have skyrocketed as a result of the invasion of Ukraine, with the Independent Commodity Intelligence Services (ICIS) reporting that in the past week, prices for crude oil reached highs that had not been seen for years. On Friday 4 March- over a week since the day that Russia invaded Ukraine- prices were at $120/bbl for physical delivery of dated BFOE. Meanwhile on Monday 7 March, prices for natural gas in the northwest European market were driven close to more than an unprecedented 270 euros a megawatt-hour.

Ajay Parmar, Senior Oil Market Analyst at ICIS, explained that a tight supply and demand dynamic had been driving crude oil prices up even before Vladimir Putin authorized the invasion in Ukraine. This precarious balance of supply and demand is the result of a forceful bounce-back in demand following the pandemic, which has been met by a supply incapable of keeping up.

The crisis in Ukraine further drove up the price amid concerns regarding the exporting capability of Russia that exports 4.5 to 5 million barrels per day, around half of which goes to Europe. “The reason why it spiked further in the last few days is because even though there have not been any direct sanctions on Russia’s oil or gas production, there has already been a material decrease in Russia’s oil and gas exports,” Parmar said.

“Specifically on oil, there has been a reduction of around 1.5 million barrels per day of Russian oil exports into the rest of the world,” he explained, “and that’s purely because there has been very little clarity over these sanctions.” The announcement from White House that it would be willing to impose sanctions on Russia’s exports of oil and gas has also contributed to driving up prices.

According to Parmar, the only move can bring oil prices down in the immediate and near-term would be barrels from Iran. “That’s the only major factor that can really dent in the oil price right now,” Parmar explained, adding that a nuclear deal is more plausible now than it has been in the past. “It looks like that could come into the market fairly soon,” he said.

Iran also has an additional storage of 80 to 120 million barrels available globally that it can also feed into the market. “We don’t know exactly how much they would release all at once, but you could be looking at upwards of 1.5, maybe 2 million barrels per day of crude added into the market,” Parmar said. “And if we see a reduction of Russian exports- if it halves, let’s say, from 4.5 to 2.2- then an addition of Iranian barrels of 1.5 to 2 million barrels per day can counter a lot- but not all- of that negative effect.”

The prices of naphtha have also been driven up, in part reflecting the high prices of crude oil, but have continued to rise due to low inventories of the major petrochemical feedstock. “We have the lowest Amsterdam-Rotterdam-Antwerp (ARA) inventories of naphtha that we’ve seen since 2016, it’s extremely low,” Parmar commented.

“Russia also supplies a significant amount of Europe’s naphtha demand- around 50% of overall European naphtha imports come from Russia- so this conflict is a direct threat to the naphtha market as well as the crude oil market,” he added. LPG prices have also risen due to the high crude oil prices, driving up the price of feedstock for petrochemicals.

Ethylene, which is closely linked to naphtha, has also seen price rises. According to ICIS, 60% of the demand for ethylene globally comes from polyethylene. The ethylene contract that is set at the beginning of the month in Europe was up by 95 euros per tonne, explained Lorenzo Meazza, senior analyst at ICIS, adding that polyethylene prices may rise above this baseline.

“The impact on prices is evident, and we are going to see higher prices for sure,” he said. “In the very short-term, higher prices for polyethylene are a possible consequence, linked also to a lot of issues regarding demand because, anyway, higher energy costs, higher production costs, may also affect demand in Europe.”

Meazza went on to add that in the past years, Russia has increased its exports of polyethylene- primarily HDPE- to Europe. This is also likely to be halted, he notes, which may impact feedstock prices in the short-term. However, this should not be a problem in the long-term since European buyers can find alternative sources from the US and the Middle East.

In addition on Tuesday 1 March, Reuters reported that aluminium prices were on an upwards trajectory as the financial sanctions imposed on Russia caused anxiety over the supply from Russian aluminium producer Rusal- the largest producer outside China. According to Reuters,  aluminium reached a record high of $4,073.50 a tonne.

Messe Düsseldorf Group has suspended business in Russia (including activities of the subsidiary Messe Düsseldorf Moscow) as a direct consequence of the invasion of Ukraine. This has also been done by the Norwegian carton company Elopak, which has halted activities in Russia and temporarily shut down its plant in Ukraine, noting that it will continue paying the salaries of the affected employees.

Stora Enso also ceased production and sales as well as exports from Russia. The company employs around 1,100 people in its three corrugated packaging plants and two wood product sawmills in the country. It notes that a “mitigation plan” has been put in place to ensure that it can attain input materials.

Mondi said that is continues to follow the situation in Ukraine and the international response to monitor the effect this will have for the Group. Mondi’s operations in Russia- which make up 12% of the Group’s revenue by location of production- remain active. This includes a mill located in Syktyvkar in the Komi Republic. On the other hand, Mondi reports that production is suspended in its paper bag plant located in Lviv in the west of Ukraine.

Meanwhile, Tarsus Group announced that the LABELEXPO Europe trade exhibition for the label and package printing industry has been rescheduled for 11-14 September 2023 due to the supply chain issues that it says have been further intensified by the invasion.

The Forest Stewardship Council (FSC) in Ukraine published a personal appeal to those involved in FSC certification. The Director of FSC Ukraine encouraged stakeholders to act and take a stance against what he called “the violation of the integrity of the whole region and FSC values”.

FSC said that it “will take all possible measures within our organization’s scope to safeguard FSC’s values and seek ways to effectively address the challenges on the short and long term.” The organization also said it is currently reviewing the situation and is expected to make a statement focused on the protection of forests, first about Ukraine in the following days and then about Russia in the next weeks.

In terms of paper-based packaging, Cepi, an association representing the European paper industry, told Packaging Europe: “The war in Ukraine is creating instability and unpredictability in the trade and business relations between the EU and Ukraine, but also with Russia, and to some extent Belarus.

“Doing business with these countries will obviously become more difficult, not only in the coming months but in the foreseeable future. This will have an economic impact, which is still very difficult to assess.”

Finally, the European Packaging Institutes Consortium (EPIC) released a statement outlining its denunciation of the war and its support for Ukraine, and called for joint action in response to the invasion. EPIC represents the national packaging institutes of 17 countries, including Ukraine. Packaging Europe announced that it fully supports this call to defend the core value of international collaboration.