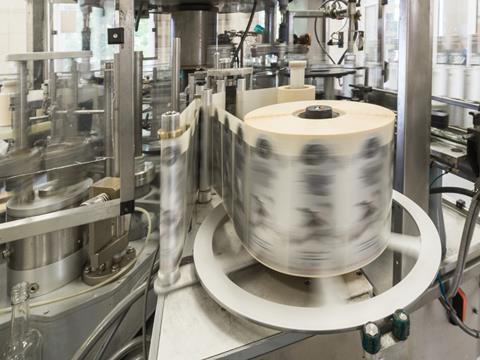 According to FINAT, European self-adhesive labelstock demand increased by 7% to almost 8.5 billion m2 in 2021, with demand largely being driven by an unexpected economic rebound in Europe after the initial downturn of the COVID-19 outbreak. However, raw material shortages coupled with supply chain tensions and ongoing strikes could destabilise the industry’s prospects for 2022.

In 2020, FINAT reports that demand for European self-adhesive labelstock increased by 4.3%, especially in essential sectors like food, personal care, and pharmaceuticals as the industry rushed to support response efforts to the COVID-19 pandemic. The latter half of 2021 saw demand spike for a different reason as Europe appeared to experience a strong economic recovery, despite the lingering uncertainties of COVID-19.

On this note, FINAT says that “the fortunes of the label industry have turned dramatically since the beginning of 2022” due to union strikes in mills in Finland and Spain that represent more than 25% of the paper grades used to manufacture materials for the printing, embellishing, and cutting of self-adhesive labels in Europe.

In Finland, employees of the Finnish forestry group UPM, which employs over 18,00 people, have been on strike since the 1st of January 2022. IndustriAll members say that they are striking because UPM has retracted its collective agreement and intends to split employees into five business groups, with some white-collar employees moved to a higher category of managerial staff. The union says that this undermines collective bargaining power and organised labour at UPM.

Therefore, the union is demanding a uniform agreement on pay and working conditions. It adds that UPM’s FSC certification is “paradoxical” as the company has not abided by the “moral obligation […] to act responsibly, not just in the management of the world’s forests, but also vis-à-vis its own employees”.

UPM has stopped collecting membership fees for the unions – which was previously assured by the collective agreement since the 1970s – and offered those who break the strike additional payments of €30 per day.

Isabelle Barthès, Europe deputy general secretary at IndustriAll, comments: “UPM is now showing the true extent of its anti-union, anti-collective bargaining agenda. Not only has the company withdrawn from a national agreement, but it also rejects company negotiations and rewards strikebreaking.

“IndustriAll Europe and its affiliates are highly alarmed and strongly warn against the individualisation of wage-setting. Together, we are calling on UPM to return to reasoning and to the negotiating table.”

Paperiliitto, the Finnish Paper Workers Union, said on the 10th of March, 2022, that the parties had agreed to meet daily over the next few weeks but that “negotiations are not well advanced”. According to Paperiliitto, “although [UPM] is giving up some of its weakening proposals, there are still too many left”.

Petri Vanhala, president of Paperiliitto, says: “We want to get back to work at UPM. The industry standard has been set by our collective agreements with the other companies in the sector.

“The only barrier we face is an anti-union attack by UPM management, for ideological rather than business reasons.”

While UPM has reportedly written to its customers in a bid to claim Force Majeure, the unions say this should be rejected as this is not an “unavoidable catastrophe”.

FINAT suggests that label converters themselves have worked to uphold the supply chain of raw materials in early 2022, using the strong preceding trade period and existing label material reserves. However, the group predicts that this cannot continue into the second quarter of 2022, and that self-adhesive material shortages could “severely disrupt” the supply of functional and regulatory labels, including for packaging in sectors such as food, pharmaceuticals, and logistics.

FINAT insists that strikers should consider the impacts of industrial action on downstream customers such as labelstock producers, label manufacturers, brand-owners, retailers, and consumers, but admits that “so far, these appeals have not been reflected in an acceleration of the negotiation process”.

According to Philippe Voet, president of FINAT: “As we have seen during the Pandemic, labels are an indispensable component of the essential infrastructure that are difficult to replace.

“Our members have always been agile and innovative in finding new and alternative solutions for their customers. Even today there is limitless creativity within the label value chain and community to secure both critical label supplies and keep our employees working. Both are very close to our hearts and we don’t like to see the relationship we have with them mortgaged by this ongoing dispute.

“Without an adequate pipeline of raw materials, label converters will be forced to extend lead times, prioritise customers, put part of the capacity on hold and send workers on leave because there are simply not enough materials to convert to labels.

“We once again appeal to the partners engaged in the dispute to do everything possible to resume production without further delay.

“Against the already tight supply chain conditions since last summer and now the hideous invasion of Ukraine by a neighbouring country, a further extension of the strike even beyond the current date of 2 April would be socially and economically unsustainable.”

The European print trade body, Intergraf, has joined FINAT in calling for a swift resolution at UPM’s Finnish paper mills, claiming that they have “greatly aggravated the current lack of paper on European markets and now threaten the supply of printed products”. The group says that printing stocks will not last until the end of the strike, with a 40% deficit in the supply of paper reportedly possible from mid-February, meaning printers will be unable to fulfil orders.

A coalition of national label associations, including BPIF and counterparts in Germany, Italy, and Denmark and representing over 1,000 label companies, have joined FINAT in writing directly to Jussi Pesonen, CEO of UPM, and Petri Vanhala, president of Paperiliitto. Intergraf adds that it has also written to the European Commission to highlight the “difficult supply situation” and flag the rising costs of raw materials and energy.

Ulrich Stetter, president of Intergraf, says: “We have real bottlenecks in our paper supplies. We can see that this shortage will increase in the upcoming months.

“This jeopardizes the rebound of our industry and our suppliers after the pandemic, and both will suffer irretrievable damage.”

Jules Lejeune, managing director at FINAT, adds: “At this particular moment it is now hitting our industry, and we’re in it together with the commercial printing sector that is represented through Intergraf.

“But this is not just about our two sectors. There are many supply chains, also nearby, that have the same ‘defect’ of global dependency on an ever smaller number of leaner players.”

Charles Jarrold, chief executive of BPIF, concurred in a statement from February: “A shortage of paper is a grave threat to our supply chains and ultimately to the products available for customers. Without labels, packaged goods cannot come to market and consumers will suffer the loss of many everyday items – foods, drinks, and medicines to name a few key areas.”

In February, FINAT reported that lead times for paper-based label materials had increased up to three months or more, with some label printers and raw material suppliers apparently forced to prioritise the allocation of deliveries among customers.

The lingering supply chain tensions resulting from the COVID-19 pandemic, as well as global freight constraints, a series of Force Majeures statements, and extreme weather conditions, could therefore be exacerbated by the unresolved dispute between UPM and its striking employees. In addition, prices for raw materials, such as starches and pulp used in papermaking, have increased alongside spiking energy costs.

Russia’s invasion of Ukraine is also likely to intensify these concerns, as mentioned by Voet, especially for the paper and pulp industry. Ukraine, Russia, and Belarus are all key exporters of timber; while production has mostly been shut down as companies try to protect employees in Ukraine, timber from Russia and Belarus is now considered ‘conflict timber’ and cannot be used in PEFC- or FSC-certified products.

Meanwhile, Finland, where the strikes are unfolding, represents 20% of all European paper and board exports to Ukraine. The European Federation of Wood Pallet & Packaging Manufacturers (FEFPEB) warns that there will be significant pressure on the supply of wood in Europe in the coming weeks due to the war in Ukraine.

In addition, Russian exports of oil and gas will now be subject to sanctions going forward, although these are expected to be implemented over time. Nonetheless, this has already had a significant impact on already-rising energy costs in Europe, which could impact other industries such as plastics producers and convertors, which have already been under immense pressure over the last year, and also result in challenges for the label industry.

Overall, FINAT believes that the strike is “not proportionate to the lasting damage that may be created if it is continued any further”. However, with UPM refusing to concede to union propositions, it seems that strikes are likely to continue into at least April.

This could mean the ripple effects in Europe will be evident soon, with existing supply chain pressures and Russia’s invasion of Ukraine worsening the situation. FINAT implies that the year ahead for the European label industry will be a difficult one, risking the progress made in 2020 and 2021.

Lejeune concludes: “Going forward beyond the current crisis, FINAT and the members of the European Label Community would like to use the lessons learned from the current case to engage in a cross-sector dialogue to better spread the risk to societies, in terms of supply chain management education, in terms of industry collaboration and in terms of public policy. At our European Label Forum in June, we will plant the seeds for such a dialogue.”