How will the PET industry deliver its sustainability targets? 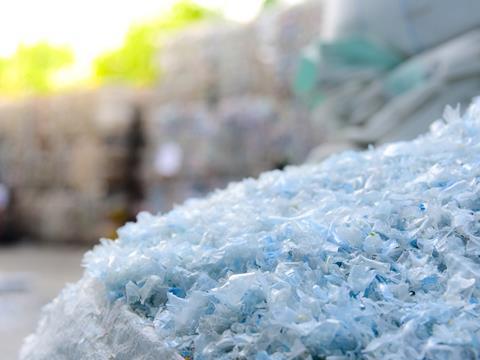 The report estimates net demand for PET in the European Union (EU) and UK was 5.1mt in 2020, of which 3.0mt was supplied from virgin PET production, 1.3mt from rPET production, and 0.8mt from imports. These figures focus on high viscosity PET (predominantly used for bottles, trays, and flexible packaging) and excludes demand for polyester fibres.

Consumption of PET across applications has increased since 2020, according to the report. This includes a 6% increase for PET bottles and an 11% increase for PET trays, with bottles, particularly beverage bottles, and trays representing the most common applications. The report says that around 7% of the PET on the market is used for flexible film applications, sometimes in combination with other materials like PP and aluminium.

Another significant trend identified by the report is the growth of the PET recycling market. Overall, 1.7mt of recycled PET flakes were reportedly produced in 2020 based on an input of 2.4mt into recycling facilities, alongside a 21% increase in the installed capacity for PET recycling. Germany accounts for the highest PET washing capacity in the EU, followed by Spain, Italy, France, and the UK and Ireland – together representing 71% of the region’s total PET washing capacity.

Packaging appears to be the primary end market for rPET, with the largest applications being trays and sheets (32%) and food contact bottles (29%). The report claims that the share of food-grade rPET in PET bottles is likely to increase, with a 25% recycled content target set for PET bottles in the EU by 2025.

Some companies have pledged to meet these targets earlier – for example, PepsiCo is aiming to use 100% rPET across its Pepsi bottle range in Europe by 2022. On this note, the report acknowledges that collection and sorting rates for beverage bottles will need to increase for many member states to meet single-use packaging (SUP) targets, with approximately 61% of bottles currently being collected and sorted for recycling across Europe based on data available for the report.

Meanwhile, the report adds that 21% of trays were collected and sorted for recycling across Europe. According to the report, not all Member States collect PET trays for recycling or, in some cases, tray content is sorted into PET bottle bales. The report warns that this can produce a lower quality recyclate and thus recommends separate recycling of PET bottles and trays, ideally with additional separate streams for mono-material and multi-material trays.

The report also estimates that 19 EU Member States will have Deposit Return Schemes (DRS) in place for PET bottles by 2025. The report adds that, at present, seven EU Member States have established DRS with sorted for recycling rates of 83% or higher.

Denmark’s DRS scheme for a range of materials, including glass, plastics, and aluminium, apparently has a redemption rate as high as 93% for drinks containers and has been suggested as a successful model for other countries to follow. While interest in DRS seems to be increasing, research from Tetra Pak found that clarity and convenience will be key to such schemes being implemented and engaged with by consumers.

However, the report also highlights some of the challenges facing the PET industry. In particular, demand for food grade rPET exceeds supply for bottle production. The report says that expanded recycling capacity and supply of sorted bottles is needed to remedy this – a call echoed by members of the European beverage industry last year, some of which contributed to the latest report. The European Fruit Juice Association (AIJN), NMWE, and UNESDA Soft Drinks Europe have put forward the case for a ‘first refusal’ mandate for rPET for the beverages industry, apparently to prevent it from being downcycled into non-food contact applications.

Recent figures from ICIS also show that the prices of rPET are at a “record high” due to a range of challenges, including increasing contamination and supply chain tensions. There are some concerns that various players across the value chain may be unable to maintain margins or risk passing hiking prices onwards, while this also jeopardises the rPET targets set for bottles by 2025.

Another issue identified by the report is the differences in collection policies, the uneven implementation of legislation, and the variable quality of bales and recyclates between Member States. In a statement released by EuPC, the group said last year that the lack of harmony in the implementation of the Single-use Packaging Directive (SUPD) risked fragmenting and devaluing the single market.

The report puts forward the need for greater support from EU policymakers to evenly implement improved recycling rates – with at least a one-third expansion of recycling capacity needed by 2029 to meet mandatory targets, the report claims. This could also include standardised design frameworks or collection guidelines intended for use by multiple Member States, such as the RecyClass initiative, which recently partnered with the European PET Bottle Platform (EPBP) to support the value chain in maximising the recyclability of bottles and to encourage cross-industry collaboration.

Another possible solution suggested by the report is additional research and development into recycling technologies. The report proposes that this should include all the processing steps, such as hot washing, de-inking, liquid separation, and odour reduction. As for advanced recycling options, the relatively new polymerisation industry is referenced in the report as an “uncertain” solution with technological developments and facilities in various stages of development.

Notably, The Coca-Cola Company revealed a prototype bottle made from 100% plant-based PET in October 2021, which it says is ready to be commercially scaled across the industry. The technology reportedly offers more flexible feedstock choice as it removes the need to create ethanol during the conversion process, with production likely to be ramped up at UPM’s biorefinery in 2023. This suggests that further research and development for PET bottles are being incorporated into sustainability strategies for key players in the industry.

Overall, data on collection rates, recycling capacity, and plastics production suggests a “steady move towards circularity” for the European PET industry. The groups behind the report concluded that it “sends a positive signal to the market” and “will boost confidence in further accelerating PET’s circularity”.