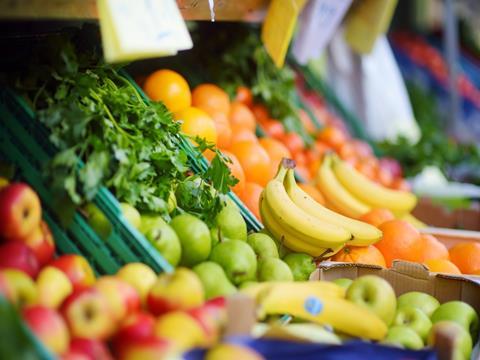 According to new research from WRAP, some plastic packaging is exacerbating food waste by forcing consumers to purchase too much fresh produce and creating confusion over Best Before dates. The charity says that savings on plastic usage, food waste, and carbon emissions could be made by selling items like apples, bananas, broccoli, and potatoes without packaging, with immediate opportunities for retailers to implement changes.

Marcus Grover, CEO of WRAP, explains: “While packaging is important and often carries out a critical role to protect food, we have proven that plastic packaging doesn’t necessarily prolong the life of uncut fresh produce. It can in fact increase food waste in this case.”

The case for produce without packaging

One of the key issues identified by WRAP’s report is the potential benefit of buying loose. WRAP claims that plastic packaging for apples, potatoes, and bananas forces consumers to buy too much, contributing to food waste in the home. As Grover told The Guardian, “in cases where consumers had no choice but to buy more than they needed in pre-packed packaging, this could actually increase food waste.”

“Enabling people to buy the right amount is the most impactful way in which selling loose will help to reduce food waste,” the charity adds in its report, suggesting that these benefits might also apply to products outside of the five focused on for the study. According to WRAP, more than 21,500 tonnes of plastic could be saved if a wider range of products that are currently sometimes sold loose were only sold loose.

In the report, WRAP says that retailers should commit to selling produce loose where barriers to removing plastic packaging are less, giving the example of peelable fruit such as bananas, and where there is the greatest opportunity to prevent food waste. Items that are already sold loose by at least one major UK retailer are also identified as a priority; bananas would also fit into this category, with Iceland introducing plastic-free packaging for pre-packed bananas as early as 2018.

For retailers, additional advice from WRAP includes making loose produce more attractive to consumers through display and pricing considerations. The charity says that retailers need to act now to scale opportunities to sell loose fruit and vegetables and to reduce the number of produce lines sold with plastic packaging.

In addition, WRAP recommends the removal of date labels on uncut fresh produce based on its research findings. In its previous guidance on best practices for labelling, WRAP suggested that removing Best Before dates could reduce household food waste when produce is sold loose. Its new research also indicates that Best Before dates “do not support people’s ability to judge when to use or dispose of many fresh produce items”, with around 8 to 11 % of consumers apparently relying on the date label to decide whether to keep or discard produce at home.

Therefore, WRAP says that suppliers and retailers should “not apply a date label to uncut fresh produce – unless it can be shown that a Best Before date reduces overall food waste”. Removing date labels from apples, bananas, broccoli, cucumbers, and potatoes could reduce food waste by 50,000 tonnes annually, WRAP claims.

Removing Best Before dates should work in tandem with Best Practice guidelines on the appropriate storage of fresh produce, according to WRAP. The charity recommends encouraging consumers to store fresh produce in the fridge at temperatures below 5oC, which could reportedly increase shelf-life at least threefold.

This advice is mainly aimed at consumers, with WRAP adding that, on average, UK fridge temperatures are higher than 5oC and that consumers should be signposted to the correct information on setting their fridge temperatures. WRAP says that 70% of post-farm gate food waste comes from the home, with this recommendation aimed at cutting this figure.

Responses to WRAP’s report vary. On the one hand, The Grocer has called the report a “breakthrough” and “landmark moment” for the industry, adding that it provides a necessary framework for retailers to respond to consumer demand for sustainable purchasing options and pressure from campaigns, such as recent calls for the UN to implement a legally binding treaty on plastic pollution.

However, the British Plastics Federation (BPF) says that, while it shares the ambitions of the UK Plastic Pact and is committed to working with WRAP going forward, the importance of plastic packaging in reducing food waste should not be ruled out yet.

“It is important to understand that its focus was solely on a small number of fresh food items and their lifespan within the home,” writes the BPF of WRAP’s report. “Whilst we acknowledge that food waste is most significant in the home, it still occurs in-store and during a product’s journey along the wider supply chain.”

WRAP refers to the “challenges” of supply chains while discussing its recommendation to sell loose, acknowledging that some reconfiguration may be needed. The BPF “respectfully suggest[s] that calculation should account for the entire journey of the product, rather than simply within the home” to provide a comprehensive understanding of the relationship between packaging and food waste. Additionally, the BPF notes that “plastic packaging also provides an extra degree of hygiene and a way to trace its origins”, which is seemingly excluded from the report.

Previous research from Empa sought to account for the entire supply chain, as emphasised by the BPF, and involved a life cycle analysis (LCA) of cucumbers, one of the products prioritised in WRAP’s report, which were cultivated in Spain and sold in Switzerland. Empa concluded that each cucumber that had to be disposed of due to losing freshness had an environmental impact equivalent to 93 plastic wraps, implying that packaging is necessary to preserve fresh produce, especially with longer supply chains in mind.

Empa has been working in collaboration with Lidl Switzerland to develop edible coatings for fresh produce made with cellulose fibres an alternative to plastic packaging, with a preliminary study finding that it could extend the shelf life of bananas – another produce item included in WRAP’s report – by more than a week. The research group is aiming to find a solution that balances the benefits of protective packaging with a reduction in plastic usage. This could provide a middle ground between WRAP’s recommendations and the BPF’s caution, although the study remains in its “infancy” according to Corina Milz, head of CSR and sustainability at Lidl Switzerland.

Reporting on WRAP’s research, The Times refers to France’s ban on plastic packaging for most fruit and vegetables, which came into effect in January 2022, as well as similar plans by Spain slated for 2023. The ban will target cucumbers, potatoes, bananas, and apples, among others, although there are exemptions for fruit and vegetables that are at risk of deterioration if sold in bulk.

When France’s ban was first announced, Emma Samson, marketing communications manager at Searious Business, told Packaging Europe: “Not all plastic packaging serves a preservative function. A lot of it is just for collation purposes, to make you buy more.

“Food waste is a huge concern for climate change, but there is plenty of evidence that even with all the advances in packaging it remains the case that one-third of all food is wasted. Most of the reductions in food waste have come from better refrigeration or genetic modification.”

This supports some of the recommendations made alongside the removal of plastic packaging in WRAP’s report, such as consumer engagement on proper home storage. Samson also agrees on the potential for “zero-waste solutions […] like spray-on edible coatings” to provide a solution that accounts for the need to preserve fresh produce while eliminating plastics.

On the other hand, Robert Lilienfeld, founder and executive director of SPRING, wrote for Packaging Europe on the ban: “Rather than banning plastic bags used for all fresh produce distribution, it might make sense to eliminate their use for certain local fresh fruits and vegetables. But it makes no sense to eliminate their use for products where this type of packaging significantly extends […] shelf life.”

Sébastien Jacques, public affairs manager at ELIPSO, likewise points out that fruit and vegetable packaging has been developed with specific functionalities in mind: “For each category of fruit and vegetables, a type of packaging has been developed and implemented to combine product protection, ease of use, but also to allow transport and logistics.”

The use of plastic packaging for fresh produce remains controversial, with reactions to France’s ban giving some precedent as to how WRAP’s report and any action that follows from retailers and governments alike may be received. Both critiques and supporters appear to agree that more research is needed to understand the challenge of fresh produce packaging and introduce holistic solutions.