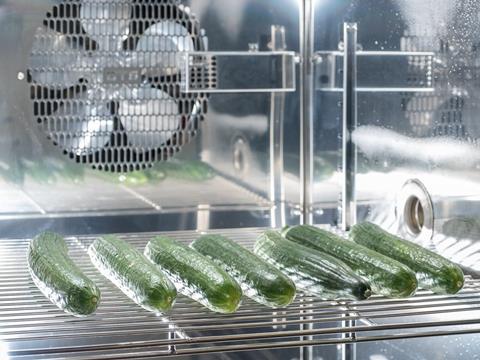 In collaboration with Lidl Switzerland, the materials and technology research group Empa has developed a protective, edible cellulose coating for fresh produce made from a natural residue derived from fruits, vegetables, or plants.

When juice is extracted from fruits, vegetables, or plants, a solid residue called pomace is left over, which is usually disposed of either via biogas plants or placed directly on fields. Pomace is considered agricultural waste and cannot be used in retail.

Researchers at Empa’s Cellulose & Wood Materials laboratory have been able to process pomace into fibrillated cellulose. This process involves extracting the pomace as a solid mash that is then washed, bleached, and ground into a thinly dispersed cellulose fibre solution, which can in turn be used as a protective coating for fruits and vegetables.

The produce can either be dipped into the cellulose coating or sprayed to provide coverage, while also leaving very little visible trace on the produce and being easy to wash off. According to Empa, the coating is non-toxic and can be consumed without harm – and future research may even enable additives such as vitamins or antioxidants to be incorporated into the coating.

Empa’s preliminary study into the cellulose coating began in 2019 and was successfully completed in Summer 2021, marking the launch of the main study and a further two years of planned research in partnership with the retailer, Lidl Switzerland.

Preliminary studies have already demonstrated the potential of the cellulose coating, with coated produce appearing to stay fresh for longer due to reduced loss of moisture and exposure to contaminants. This is especially important for fresh produce with longer supply chains, which are transported greater distances before being displayed on supermarket shelves.

For example, the preliminary study found that a cellulose nanofibre (CNF) coating made from carrot pomace sourced from a local Swiss vegetable producer could extend the shelf life of bananas by more than a week with a “substantial delay” in browning. Similar results were found for cucumbers coated with the cellulose solution, which retained moisture and remained fresher across a six-day period compared to an uncoated cucumber.

According to Tanja Zimmermann, member of Empa’s Executive Board: “With our research, we are pursuing the circular concept and bringing waste materials a new added value under the motto ‘Carrot protects cucumber’.

On this note, the preliminary success of Empa’s cellulose coating suggests a possible solution that both reduces food waste and eliminate some of the issues associated with plastic packaging. Writing for Packaging Europe, founder and executive director of SPRING, Robert Lilienfeld, said that a top-down approach to develop and test solutions such as this could be a more effective way of addressing food waste than blanket bans on single-use plastic packaging.

The overall aim of Empa’s project is for the cellulose solution to be used in 150 Lidl stores across Switzerland, depending on the success of the main trial, which will be supported by Innosuisse, the Swiss innovation agency.

Torsten Friedrich, CEO of Lidl Switzerland, concludes: “Our new coating technology could represent a milestone in our company’s history.

“With the protective film, we not only reduce food waste and packaging material on a large scale, but also extend the shelf life of the food at our customers’ homes.

“Last but not least, with this project we are once again demonstrating our innovative strength and unique dynamism.”