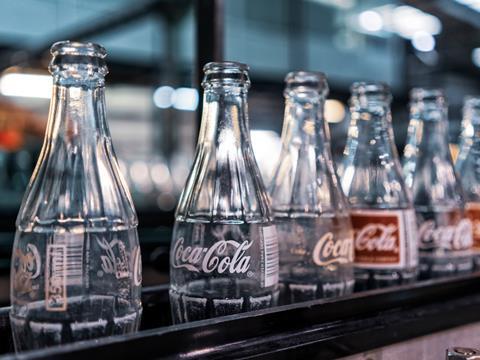 The Coca-Cola Company has announced what it says is an “industry-leading goal” to sell at least 25% of all beverages across its global portfolio in refillable or returnable glass or plastic bottles and containers.

The goal will include refillable containers sold for traditional fountain or Coca-Cola Freestyle dispensers, claiming that “container collection is built into the beverage delivery model”.

According to The Coca-Cola Company, 16% of its total volume of products in 2020 was sold in traditional refillable or returnable packaging. The company adds that, in more than 20 markets, returnable glass bottles and refillable PET already represent more than 50% of its product sales. 25% of sales are reportedly returnable or refillable bottles and containers in a further 20 markets.

In addition, The Coca-Cola Company says that the use of refillables is growing in several markets, while each market will use different methods to reach its 2030 goal. For example, in 2020, refillable options outperformed non-refillables in Germany, where consumer interest in deposit return schemes has risen in recent years with 72.6% of people reporting that they would support such an initiative for single-use beverage bottles and cans.

Similarly, in parts of Latin America, reusable bottles represented approximately 27% of transactions in 2020, again with some countries seeing refillable options outperform non-refillables, according to The Coca-Cola Company.

In this region, the company adds that it has expanded the rollout of its Universal Bottle scheme, which involves consumers paying an indirect deposit during the purchase of a Coca-Cola brand bottle of identical colour, shape, and size, and then receiving a discount on their next purchase when they return the empty bottle. The bottles are cleaned and the labels washed off, followed by refilling and rebranding, at a Coca-Cola facility, apparently allowing the bottles to be reused across 25 cycles and recycled at end of life. First launched in Brazil, the scheme is now also active in Argentina, Chile, Colombia, Mexico, Guatemala, and Panama.

Other commitments that the company says will help it to reach its 25% refillable or returnable by 2030 pledge include a collaboration with Carrefour to pilot Loop in France. Carrefour was the world’s first retailer to offer Loop in store, although the scheme has since opened at Tesco stores in the UK where consumers can also purchase Coca-Cola products. The scheme involves containers that can be returned after purchase, then cleaned and refilled for reuse, with Tom Szaky, founder and CEO of Loop and TerraCycle, saying the future “focus is fundamentally about driving scale, access, and operational cost […] as low as possible”.

Elsewhere, the company claims it will expand the rollout of refillable PET bottles that can eventually be recycled into new PET bottles in South Africa, as well as work with Burger King and TerraCycle in the US to pilot, in select cities, options for reusable food containers and beverage cups.

The company has also proposed the introduction of smart packaging solutions with the use of reusable cups with microchip technology for Coca-Cola Freestyle machines at theme parks, on university campuses, and on cruise ships.

Elaine Bowers Coventry, chief customer and commercial officer at The Coca-Cola Company, comments: “We continue to put consumers at the centre of all we do.

“One way to do that is by offering sustainable packaging types. Accelerating use of reusable packages provides added value for consumers and customers while supporting our World Without Waste goal to collect a bottle or can for every one we sell by 2030.”

In its ‘Reuse: Rethinking Packaging’ report, the Ellen MacArthur Foundation says that converting 20% of global plastic packaging into reuse models could represent a $10 billion business opportunity, with added benefits to consumers and the environment. The Coca-Cola Company notes that the Ellen MacArthur Foundation recognised its Universal Bottle as “leading practice on reuse”.

Ben Jordan, Senior Director of Packaging and Climate at The Coca-Cola Company, adds: “Reusable packaging is among the most effective ways to reduce waste, use fewer resources and lower our carbon footprint in support of a circular economy.