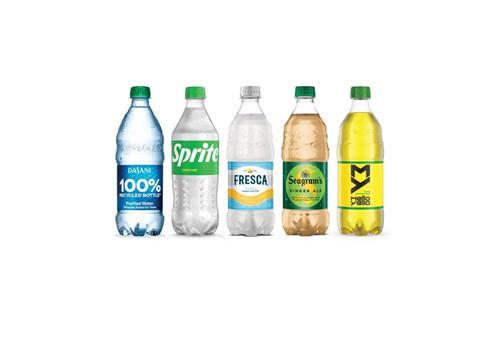 The Coca-Cola Company has announced that Sprite bottles will begin the transition from green to clear PET in North America with the aim of increasing the material’s likelihood of being recycled into new beverage bottles, while its remaining green plastic portfolio will make the switch in the coming months.

According to The Coca-Cola Company, Sprite is shifting all of Sprite’s plastic PET packaging from its signature green colour to clear PET in North America, beginning on August 1st 2022.

The company explains that while green PET is technically recyclable, it is more often converted into single-use items like clothing and carpeting that cannot then be recycled again into new PET bottles. During the sorting process, green and other coloured PET is often separated from clear material to avoid discolouring the recycled food-grade packaging required to make new PET bottles.

Julian Ochoa, CEO of R3CYCLE, which is working with Coca-Cola Consolidated to enable bottle-to-bottle recycling, adds: “Taking colours out of bottles improves the quality of the recycled material.

“This transition will help increase availability of food-grade rPET. When recycled, clear PET Sprite bottles can be remade into bottles, helping drive a circular economy for plastic.”

In addition to transitioning to clear bottles, The Coca-Cola Company says that Sprite is introducing a new visual identity system, featuring a revamped logo and packaging design intended to provide a consistent ‘look’ around the world. Sprite’s packaging graphics will apparently retain the brand’s recognizable green hue and include prominent “Recycle Me” messaging.

Coca-Cola North America’s entire green plastic portfolio — including packaging for Fresca, Seagram’s and Mello Yello — is expected to transition to clear PET in the coming months.

In the same announcement, The Coca-Cola Company says another of its North American brands, DASANI, will roll out bottles made from 100% recycled PET (excluding caps and labels) for its 20-oz and 1.5-litre singles and 10-oz and 12-oz multipacks. This shift will reportedly include all DASANI bottles in Canada.

The company claims that DASANI’s transition to 100% recycled plastic could save more than 20 million pounds of new plastic compared to 2019, while potentially cutting more than 256,000 metric tonnes of greenhouse gas emissions through the use of recycled plastic in 2023. DASANI has pledged to remove the equivalent of 2 billion virgin plastic bottles from production by 2027 compared to 2021 levels.

The DASANI announcement follows the launch of 100% recycled plastic bottles in New York, California, and Texas, the company adds. The launch apparently helped the Coca-Cola system to identify the best quality sources of rPET and fine-tune the production process.

The Coca-Cola Company says that the new DASANI bottles will feature bold, on-pack “100% Recycled Bottle” and “Recycle Me Again” calls-to-action, which will also be used on retail signage and other communications.

Chris Vallette, senior vice president of technical innovation and stewardship at Coca-Cola North America, comments: “Demand for rPET currently exceeds supply, so the first step to scaling up use of 100% rPET across our portfolio is building a sustainable pipeline of high-quality material.

“We do this by working with communities to boost PET recycling and collection; collaborating with recycling partners; and, finally, securing rPET to help ensure the material for our bottles is used again and again.

“We saw how much the 100% recycled PET message truly resonates with our customers and consumers, particularly DASANI fans whose sustainability expectations are especially high.”

According to Vallette, the transition to clear PET Sprite bottles could also help to address the challenge of strained rPET supply: “Sprite’s move to clear will help us introduce more 100% rPET bottles like DASANI is launching and keep more bottles in the circular economy.”

Coca-Cola has already transitioned to 100% rPET bottles in the Netherlands, Norway, and Sweden, with Sprite also offered in clear plastic bottles. Representatives from across the European beverage industry have called for legislation to support a closed loop for PET, which it says should ensure that bottles are recycled back into bottles rather than used for alternative applications such as textiles.

In addition to transitioning more of its portfolio to rPET, The Coca-Cola Company has pledged to make 25% of its global portfolio available in refillable or returnable glass or plastic bottles and containers by 2030.