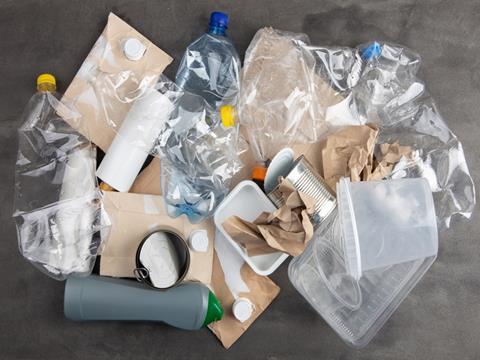 DS Smith conducted the research in partnership with YouGov and based on analysis from its Kemsley mill, the largest mill for recycled paper in the UK. According to the research, 12 items frequently put in mixed or paper recycling streams that are considered difficult to recycle have resulted in the equivalent of 391 million bin bags of plastic contamination being collected from Kemsley Mill, which can end up being incinerated or put in landfill if other recycling options cannot be found.

The most common difficult to recycle item put in paper streams is junk mail, DS Smith claims. The company says that the plastic windows and glue used for junk mail create issues as they require separation or can contaminate the recycled end material produced by paper mills. A similar issue (although reportedly less are placed in the mixed or paper recycling stream) arises with padded envelopes, which DS Smith says feature a high volume of plastic that is difficult to separate from the paper elements.

The second most common item, representing a 38% share of the problematic materials identified by DS Smith, are food trays, such as cardboard food trays that can be put directly in the oven. DS Smith explains that these often contain lamination, which interferes with the breaking down of waste in paper mills, or are contaminated with food, which can make them unsuitable for recycling due to the possibility of introducing microbes and other impurities to the process. Food cartons, such as soup, apparently pose a similar issue: the plastic layer that is sometimes used to coat cardboard is difficult to separate and break down, again interfering with its ability to be recycled.

DS Smith adds that pulp food trays – around 28% of the difficult to recycle items being placed in the streams examined in the report – can pose an issue in that they often contain low-quality, weak fibres. This means they are not always strong enough to be recycled into other paper packaging products.

Several other food packaging types were identified in the research. For example, crisp tubes are composite packaging and, according to DS Smith, contain over 50% of non-paper materials that cannot be recycled at paper mills. Noting that composite paper tubes are nonetheless often the packaging of choice in traditional markets for applications such as food, alcohol, and beauty, Smurfit Kappa last year revealed Eco-Tube, a new composite paper tube that is apparently recyclable through readily available consumer recycling schemes.

Wax or silicone papers such as those used to wrap butter can also be problematic, DS Smith says, with the coatings making it difficult to access high-quality fibres during recycling. There have been some recent innovations specifically relating to this challenge: Amcor’s 100% paper butter wrap that is apparently compostable in both home and industrial settings and Wipak’s butter wrap that is reportedly kerbside recyclable in paper streams after washing.

Meanwhile, sandwich wrappers often feature a plastic lamination that can consist of up to 20% of the wrapper, again making it difficult to separate cardboard and plastic elements at paper mills, DS Smith says. The company adds that insulted food delivery packaging also often contains plastic layers for thermal protection, as well as waterproof fibre packaging that takes longer to break down in paper recycling streams.

Coffee bags and pouches, similarly, can contain metal coatings that break down into very small parts – described as “glitter-like” by DS Smith – that can contaminate finished paper products, the company explains. A similar issue apparently presents itself with glittery gift wrap and greetings cards, where small glitter or metal pieces can damage recycling machinery.

As for beverage packaging, DS Smith says fast food soft drink cups are frequently double laminated, again causing problems with retrieving recyclable fibres. A potential solution to this could be refill schemes, like the one being piloted by Starbucks in London and Geneva with the intention of being scaled across its EMEA stores, where customers can pay a deposit for a plastic cup that can be returned, cleaned, and reused. McDonald’s has also joined forces with Loop on a returnable coffee cup scheme where customers can choose to have a hot drink in a returnable cup apparently made from post-consumer recycled single-use coffee cups for a deposit of £1, receiving a 20p discount on their purchase as a reward.

Overall, DS Smith warns that contamination resulting from the 12 packaging types identified in its research can add to processing costs for paper mills and contribute to higher volumes of waste ending up in landfill.

In a survey of consumers, DS Smith found that 50% would like to see clearer labelling on products in stores, while almost half would like more fibre-based packaging options on supermarket shelves. DS Smith notes that this will require changes to be made upstream.

Rogier Gerritsen, managing director at DS Smith Recycling, comments: “While many people are doing their best to recycle commonly used items, the problem starts way before then in how a product is made.

“By designing packaging which reduces the number of different components used and contains labelling that is easier for customers to understand, we increase the quality of the recyclable products and reduce the current volume of materials that are rejected.

“Our Circular Design Principles ensure that recyclability is built in at the start of the process, not at the end.”

Developed with the Ellen MacArthur Foundation, DS Smith’s Circular Design Principles encompass the protection of products, using no more materials than necessary, designing for supply cycle efficiency, keeping packaging materials in use, and challenging the status quo in developing a circular economy.

Earlier this month, the 4evergreen alliance released its Circularity by Design guideline with the aim of providing clear recommendations for designing fibre-based packaging for recycling from the start of its lifecycle. The guideline defines paper-based packaging’s compatibility with standard recycling processes, noting that the introduction of plastic or wax barriers can negatively impact recyclability by reducing yield, increasing processing times, and impacting the visual and mechanical properties of the finished recycled paper product. However, 4evergreen does note that there are effective technologies available to reduce or remove food residue and that minor contamination can often be tolerated by most recycling facilities.