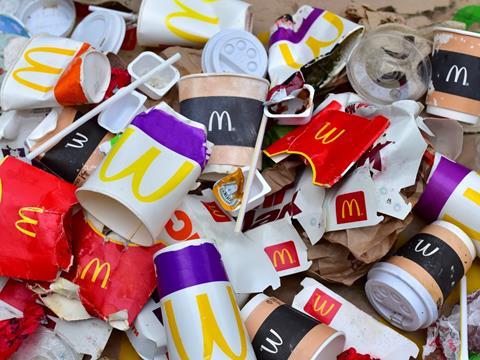 As You Sow reports that more than 206 million shares, representing 41.9% ownership of McDonald’s Corporation, expressed support for a resolution filed by the organisation requesting that the company develop a report listing the actions it will take to reduce plastic packaging pollution.

As You Sow, an organisation led by shareholder advocacy, says that McDonald’s is particularly at-risk of negative regulatory, financial, and reputational impacts for its use of plastic packaging. McDonald’s received a “D-” grade in As You Sow’s Corporate Plastic Pollution Scorecard, which places it 50th behind other large fast-moving consumer goods companies when it comes to actions taken to prevent plastic packaging pollution.

As You Sow highlights McDonald’s single-use, to-go packaging like cold beverage cups, condiment packets, and utensils, which reportedly make up a significant component of ocean-bound plastic pollution. The organisation adds that McDonald’s is absent from the New Plastics Economy Global Commitment, which involves participants adopting goals to transition to packaging-free and refillable packaging formats while reducing overall single-use plastic packaging by 2025.

According to SYSTEMIQ and The Pew Charitable Trusts’ ‘Breaking the Plastic Wave’, the annual flow of plastic into the ocean could nearly triple by 2040, with the estimated figure of plastic leakage into oceans currently standing at 11 million metric tonnes per year. The report calls on corporations to cut plastic use by one-third through elimination, reuse, refill, and other delivery systems, but As You Sow claims that McDonald’s has no goal to reduce its overall use of plastic packaging in line with these research findings.

Therefore, As You Sow filed a resolution requesting the McDonald’s Board “issue a report, at reasonable expense and excluding proprietary information, describing how the company will reduce its plastic use in alignment with the reductions findings of the Pew Report, or other authoritative sources, to feasible reduce ocean pollution”.

As You Sow adds that the report from McDonald’s should assess the risks associated with continuing to use substantial amounts of plastic packaging “while plastic pollution grows unabated”, evaluate the benefits of “dramatically reducing” the amount of plastic used in its packaging, and describe how it can further reduce single-use packaging through strategies like reusables or increasing recycled content.

More than 206 million shares, which is equivalent to 41.9% of the ownership of McDonald’s, reportedly support the proposal.

Kelly McBee, waste programme coordinator at As You Sow, comments: “This high vote sends the message that McDonald’s must do much more in order to address the plastic pollution crisis.

“In response to its shareholders, we expect the company to set new goals to reduce plastic pollution, such as a commitment to use less plastic overall.”

Earlier this year, McDonald’s announced that it will trial recyclable clear plastic cups sourced from post-consumer plastic and bio-based materials such as used cooking oil from its own restaurants, although this will be limited to 28 select restaurants in Georgie in the USA. The company has also worked with Huhtamaki on a Sundae cup made from 100% wood fibre and transitioned from paperboard boxes to thinner wrapping paper at some of its German restaurants, but these solutions do not appear to have been widely scaled yet.

Similarly, McDonald’s and Loop have partnered to offer returnable coffee cups as part of a deposit return scheme. However, this scheme was only available initially at six UK restaurants. Therefore, while McDonald’s has explored some strategies to reduce or eliminate virgin single-use plastic across its packaging portfolio, it is lacking actionable solutions that tackle plastic pollution at scale – a challenge that shareholder support backed by As You Sow may help to address going forward.