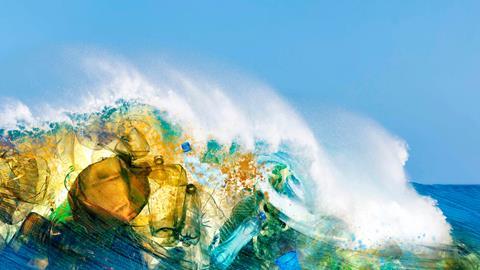 How can we break the plastic wave?

‘Breaking the Plastic Wave: A Comprehensive Assessment of Pathways Towards Stopping Ocean Plastic Pollution’, released today, presents comprehensive and startling research by SYSTEMIQ and The Pew Charitable Trusts, finding that without immediate and sustained action, the annual flow of plastic into the ocean could nearly triple by 2040. However, the study also identifies solutions that could cut this volume by more than 80 per cent, using technologies that are available today – if key decision-makers are willing to embrace system-wide changes. Ahead of the public release of this research, Tim Sykes discussed its implications with Yoni Shiran, SYSTEMIQ associate.

In parallel with this release of findings from the scientific analysis, the technical underpinnings of the report are published today in an article in the journal Science: ‘Evaluating Scenarios Toward Zero Plastic Pollution.’ The stark message of the research is that if no action were taken to address the projected growth in plastic consumption, the amount of plastic entering the ocean each year would grow from 11 million to 29 million metric tons over the next 20 years (equivalent to nearly 50 kilograms of plastic on each metre of coastline worldwide). Because plastic remains in the ocean for hundreds of years and may never truly biodegrade, the cumulative amount of plastic in the ocean by 2040 could reach 600 million tons – equivalent in weight to more than three million blue whales. Moreover, the existing situation has been exacerbated by the additional challenges presented by COVID-19, as single-use plastic consumption has increased during the pandemic, according to the International Solid Waste Association.

“In recent years, an increasing number of studies and reports have advanced the global understanding of the challenge posed by ocean plastic pollution,” Yoni Shiran told Packaging Europe. “But most leaders across industry, government, and civil society have noted a critical gap: an evidence-based roadmap to describe the pathways available and to foster convergent action. Plastic pollution in the ocean is a major environmental challenge, yet a coherent global strategy to solve this growing crisis remains elusive. While all stakeholders are concerned about plastic pollution and show commitment to act, they often offer contradicting strategies ranging from plastic bans, to recycling, landfills, incineration, through substitution or clean-ups. What struck is how these solutions were unreconciled, and how a fundamental analysis was missing to make an apple-to-apple comparison between the economic, environmental and social performance of these strategies. This is exactly the gap we are attempting to close.”

Today’s report is the result of this effort. Working in collaboration with the universities of Oxford and Leeds, the Ellen MacArthur Foundation, and Common Seas and a panel of global experts, Pew and SYSTEMIQ utilised an innovative economic model that quantifies the flow and amount of plastic in the global system. It proceeds to compare the quantity of ocean plastic pollution between 2016 and 2040 under six scenarios, ranging from ‘business-as-usual’ to a ‘system change scenario’ of the world’s plastics system, including its production, collection, consumption, and disposal/recycling. The modelling quantifies the associated cost, climate, and employment implications of each scenario.

Although progress has been made in addressing the global plastic challenge, the report concludes that current government and industry commitments will reduce the amount of plastic flowing into the ocean only by 7 per cent by 2040. It also suggests that without meaningful change, some four billion people worldwide are likely to be without organized waste collection services by 2040, contributing significantly to the projected amount of ocean plastic pollution. Closing this gap would require connecting more than half a million people to collection services per day until 2040.

“Our analysis doesn’t suggest that the existing mainstream solutions aren’t effective or that they should be discontinued, but rather that solutions need to be vastly scaled, better prioritised, and in some cases complemented with additional, more effective, solutions,” Yoni Shiran commented. “Current commitments and actions, while a great first step, are insufficient. Industry must increase ambition. For instance, only 20% of companies currently have plastic commitments. That means that 80% don’t, and should catch up. Secondly, commitments are currently focused mostly in North America and Europe. While these are great for the circular economy, reduction of virgin material, reduction of carbon emissions, they are not very effective in reducing environmental pollution. Companies must ensure their efforts are as ambitious in the Global South as they are in the Global North, if not more. In addition, most company efforts are focused on recyclability and recycling. Not enough efforts are going towards shifting to new delivery models such as reuse and refill systems. These are the systems we need to build, and many of them are already in the money.”

2. Governments and industry leaders are stepping up with new policies and voluntary initiatives, but these are often narrow in focus or concentrated in low-leakage countries.

3. There is no single solution to end ocean plastic pollution. Upstream and downstream solutions should be deployed together.

4. Industry and governments have the solutions today to reduce rates of annual land-based plastic leakage to the ocean by about 80 per cent (82 ±13 per cent) below projected BAU levels by 2040, while delivering on other societal, economic, and environmental objectives.

6. The System Change Scenario is economically viable for governments and consumers, but a major redirection of capital investment is required.

7. Reducing approximately 80 per cent (82 ±13 per cent) of plastic leakage to the ocean will bring to life a new circular plastics economy with major opportunities—and risks—for industry.

8. A system change would require different implementation priorities in different geographies and for different plastic categories.

9. Addressing plastic leakage to the ocean under the System Change Scenario has many co-benefits for climate, health, jobs, working conditions, and the environment, thus contributing to many of the United Nations Sustainable Development Goals.

10. The time is now: If we want to significantly reduce plastic leakage, we have the solutions at our fingertips. An implementation delay of five years would result in an additional ~80 million tons of plastic going into the ocean by 2040.

‘Breaking the Plastic Wave’ identifies eight measures that together could reduce by 2040 about 80 per cent of the plastic pollution that flows into the ocean annually, using technology and solutions available today. Among them are reducing growth in plastic production and consumption, substituting some plastics with alternatives such as paper and compostable materials, designing products and packaging for recycling, expanding waste collection rates in middle- and low-income countries, increasing recycling, and reducing plastic waste exports. In addition to improving ocean health, the report finds that adopting the changes it outlines could generate savings of $70 billion for governments by 2040, relative to business-as-usual; reduce projected annual plastic-related greenhouse gas emissions by 25 per cent; and create 700,000 jobs.

While the system change scenario reduces annual ocean plastic pollution rates by more than 80 per cent, it will take an unprecedented level of action and will still leave more than five million metric tons leaking into the ocean each year in 2040. Fully eliminating the flow of ocean plastic pollution will require dramatically increasing innovation and investment, with significant technological advances, new business models, and a greater emphasis on research and development.

In the wake of the ‘Breaking the Plastic Wave’, SYSTEMIQ will be working with partners to maximise its impact by building decision support tools for business executives and government officials, in addition to preparing a number of additional publications, which will be released in the months to come.

“Our results indicate that the plastic crisis is solvable. It took a generation to create this challenge; this report shows we can solve it in one generation,” commented Martin Stuchtey, SYSTEMIQ’s founder and managing partner. “‘Breaking the Plastic Wave’ leaves no viable excuse on the table; we have today all the solutions required to stem plastic flows by more than 80 per cent. What we now need is the industry and government resolve to do so.”

View the report at: www.systemiq.earth/breakingtheplasticwave