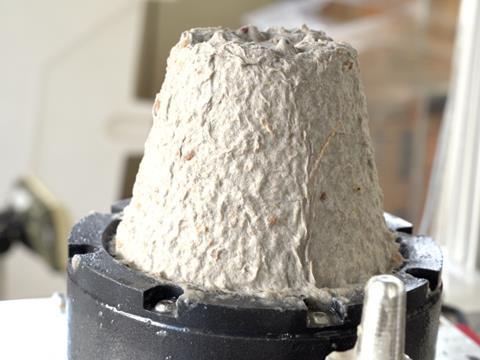 Scientists from Oregon State University have developed moulded pulp packaging made primarily with apple pomace, alongside a trial of bio-based barrier solutions to improve the water resistance of packaging materials made from fruit and vegetable by-products.

While recycled newspaper has traditionally been one of the main ingredients in moulded pulp packaging products, the supply of this material is in decline due in part to the falling demand from consumers for newspapers, reducing the availability of post-consumer waste for recycling. This means the industry requires substitute materials to produce moulded pulp packaging for applications such as takeaway containers, beverage cartons, and flower pots.

Yanyun Zhao, a professor at Oregon State University, has studied the potential of by-products from the processing of fruits, vegetables, and wines as an alternative for recycled newspaper. In particular, the research group focused on the potential of apple pomace as the main ingredient for moulded pulp packaging.

Zhao explains: “Right now, apple pomace is typically just composted or used for animal feed. We thought why not turn it into an environmentally friendly product that meets an industry need.”

Additionally, apple pomace is a geographically advantageous material for the Oregon-based research group, as it is readily available in the Pacific Northwest coast of the US. Fruit pomace was provided for the study by Hood River Juice Company of Hood River.

During the production of apple juice, around 70-75% of the apple goes into the juice itself, while 25-30% is reportedly left as pomace.

According to the research team, a key challenge that has arisen while studying the use of apple pomace is the water resistance of the moulded pulp packaging, which will need to withstand high levels of moisture, liquid food, or non-food items and products stored under high humidity conditions.

Further research has been conducted by the team to develop a solution to boost the water resistance of the apple pomace-based products, with a focus on making it bio-based, compostable, and cost-effective. This includes incorporating polymers and compounds such as lignin, chitosan, and glycerol.

Lignin is an organic polymer that supports the tissue and cell walls of most plants, giving them rigidity. It can be extracted from wood and is often a by-product of the paper industry, with approximately 50 million tonnes produced worldwide each year. For the study, rhubarb pomace, which is particularly rich in lignin, was used.

Similarly, chitosan is also a bio-based polymer, often derived from chitin (which can be extracted from crustaceans, molluscs, and fungi) and commonly used in the papermaking industry. Zhao’s research group reportedly found that chitosan absorbed onto cellulose nanofibres (CNF) via hydrogen bonds “significantly” reduced the water absorption of CNF films.

Glycerol is an organic compound that can be added to materials to make them softer and more flexible. The use of low levels of glycerol in previous studies also demonstrated decreased water absorption.

Along with lignin, chitosan, and glycerol, the team also added cardboard fibre to the moulded pulp packaging products for stability.

In another previous study, the team created a two-step preparation of a heat, cold, and water resistant superhydrophobic coating. In this study, a one-step coating was applied to the surface of the apple pomace-based product to enhance water resistance.

Based on the current study, Zhao - along with co-authors Clara Lang, Jooyeoun Jung, and Taoran Wang - say they have demonstrated the “feasibility of using fruit pomace as a new source of fibre in producing moulded pulp packaging,” alongside possible solutions to improve the water resistance of such packaging materials.

Earlier this year, the research group Empa, working in collaboration with Lidl Switzerland, announced the preliminary success of its edible cellulose coating for fresh produce like cucumbers and bananas. The coating is made by extracting pomace from a solid mash of carrots, which is bleached, washed, and ground into a cellulose fibre solution that is apparently non-toxic and can be consumed without harm.

The technology company Xampla has likewise developed packaging from pea protein material. For example, the pea protein can be dried into sheets with similar properties to plastic, which were used by Gousto for an edible stock cube, or made into microscopic capsules that protect vitamins within fortified liquids from being broken down by UV rays when packaged in clear plastic bottles.