Red is the New Black 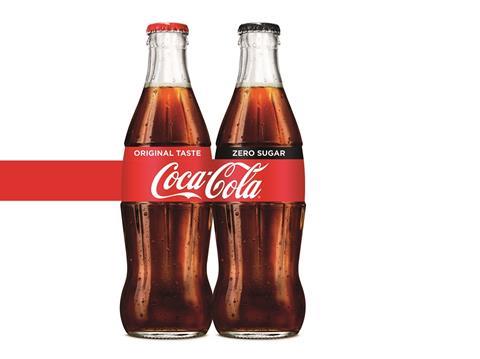 From September onwards, the bottles and cans of both variants will feature the iconic Coca-Cola red with a coloured band across the top of the bottle or can to denote whether it is the original taste or zero sugar. The bottles will also feature coloured caps to help consumers differentiate between the original recipe and no sugar variants.

The packaging changes are the latest move in the company’s commercial strategy to drive sales of its no sugar drinks including Coca-Cola zero sugar. This builds on the launch of the new Coca-Cola zero sugar in 2016, when it was given a new recipe and look, and since then it has become the fastest growing no-sugar cola in UK retail[1]. Today 58 per cent of the Coca-Cola sold in retail in Great Britain is no sugar.[2]

A £5 million marketing campaign will communicate the changes to consumers and will include a 10 second and 30 second TVC alongside out of home advertising. An extensive Coca-Cola zero sugar sampling campaign will see seven million cans sampled by the end of the year.

The new TVC, ‘One Way or Another’, reminds consumers they can enjoy the great taste of Coca-Cola, with or without sugar. The creative is brought to life through a series of mirrored visuals of great experiences, that like both drinks, are just as enjoyable either way – tied together with the tagline ‘an original taste, one way or another’.

Simon Harrison, Customer Marketing Director, Coca-Cola European Partners GB said: “For more than 130 years, the colour red has been associated with the great taste and experience of enjoying a Coca-Cola and we want to make it even clearer that you can have that taste and experience with or without sugar. Sales of Coca-Cola zero sugar have almost doubled in the last two years[3] and we believe this latest change will help us grow it even further and encourage more people to give it a try.”

All Coca-Cola packaging will continue to be 100 per cent recyclable and the company has a commitment to increase the recycled plastic in all of its bottles from 25 to 50 per cent by 2020.