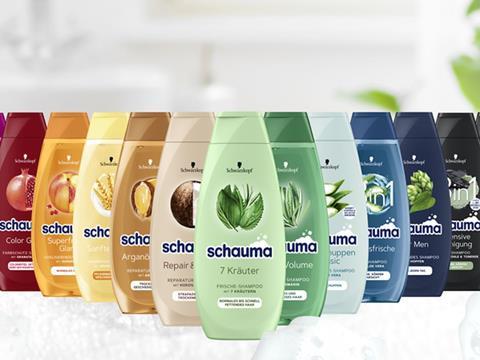 Henkel’s Schwarzkopf brand will relaunch its Schauma range from February 2022 with a bottle redesign that allows for clearer and more personal communication with the consumer, as well as lighter bottle bodies containing at least 50% recycled plastic.

One of the key changes to the Schauma packaging will be a “timeless, unisex and modern” redesign, according to Henkel. The new logo, which features the Schauma name in dark blue with foam bubbles around the lettering, apparently demonstrates the purpose and value of the brand.

In addition, Henkel says the new packaging will be minimalistic, allowing clearer communication of product benefits for individual hair types. The company adds that the consumers will be addressed directly on the back of the packaging, with an “emotional” pull that will help them find the most suitable product.

The redesign will also be monochromatic, with the cap and bottle designed in the same colour. According to Henkel, this leaves space for the illustrations on the bottle while also reinforcing the clarity of the product information.

The caps of the Schauma bottles are also made from 25% recycled plastic, according to the company. Additionally, Schauma bottles will apparently be packed in a recyclable paper folding box.

The Schauma Relaunch Portfolio will be available in stores from February 2022.

Earlier this year, Henkel announced that its Pril hand dishwashing liquid would be available with a refillable option, with a 100% recycled PET pump dispenser bottle and a recyclable mono-material PE pouch from Mondi. A previous relaunch of Henkel beauty brands such as Nature’s Box also involved a focus on improving sustainability, with the use of Social Plastic, recyclable black plastic, and post-consumer recycled materials.