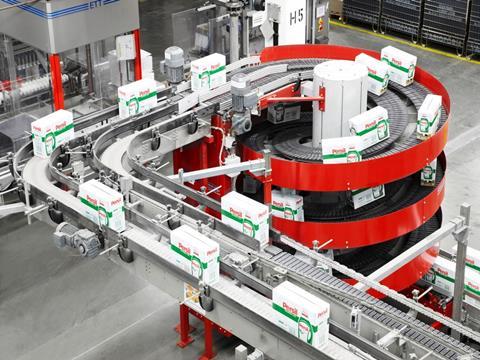 Henkel has announced that around 110,000 tonnes per year of fossil-based feedstock across its Laundry & Home Care and Beauty Care businesses will be replaced with renewable carbon sources using BASF’s certified biomass balance approach.

The announcement follows a successful pilot with Henkel’s cleaning and detergent brand Love Nature in 2021.

According to BASF, the replacement of fossil feedstock is possible through its biomass balance approach, where renewable resources are used in the very first steps of chemical production. The bio-based feedstock amount is then attributed to specific producers by means of the certified method.

BASF adds that it has established a closed chain of custody from the renewable feedstock it uses through to the final product. TÜV Nord, an independent certification body, has reportedly confirmed according to the REDCert2 certification scheme that BASF replaces the required quantities of fossil resources for the biomass balanced product with renewable feedstock.

Henkel’s collaboration with BASF will apparently see around 110,00 tonnes of ingredients be substituted each year with renewable feedstock using BASF’s certified mass balance approach. Henkel claims that its core brands like Persil, Pril, Fa, and Schauma will therefore come with a reduced carbon footprint, with around 200,000 tonnes of CO2 emissions reportedly avoided in total.

Carsten Knobel, CEO of Henkel, comments: “We are delighted to build on our ongoing cooperation with BASF and significantly increase the share of biomass in our value chain for our products used by millions around the world every day,

“To foster a regenerative planet, we are on a journey toward an environmental transformation of our business model. We intend to continuously enhance our processes, products and use of raw materials for a resource-efficient, carbon-neutral future.

“Integrating BASF’s biomass balance approach into our supply chain as an early-mover is a right step in that direction.”

Dr Martin Brudermüller, chairman of the Board of Executive Directors of BASF, adds: “We are also proud to support such an innovative brand owner that is a first mover in offering end-consumers more sustainable solutions on such a large scale. The project underlines the commitment of both companies to creating a sustainable future.”