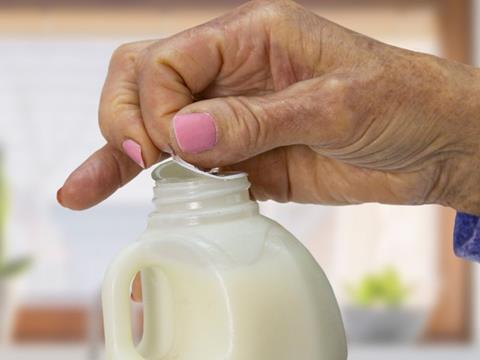 With more older people being affected by arthritis, designers must develop new ways to ensure packaging is easily accessible to users, while maintaining pack security. Selig Sealing explores how packs can be made safe and easy to open at the same time.

Another prime example is that of accessible packaging. As many older people succumb to arthritis, they find it difficult to perform everyday tasks, such as opening medicine bottles or food packaging. While these products can be developed according to accessible design guidelines, there can be points of contradiction.

For instance, packaging, especially for medicines, must remain secure. Innovations such as child-safe lids, security seals and tamper evidence have been commonplace for many years. However, it can be difficult to incorporate two competing needs - accessibility and security - into the same design.

There are several reasons for adding an extra layer of sealing to packaging. Firstly, it can help to prolong shelf life. Adding an airtight seal to a jar or peanut butter or freeze-dried coffee helps to keep it fresh for longer (until it is opened).

There is also security. The US Food and Drug Administration (FDA) was one of the first authorities to issue a regulatory requirement for tamper-evident packaging. This followed an incident of malicious tampering involving a pharmaceutical product, which resulted in a number of deaths.

A third issue is that of preventing children from accessing products, especially medicine. However, this is more likely to be in the form of child-proof caps, rather than a sealing layer.

There are many frustrations to old age and packaging should not be one of them. A recent UK survey, whose results are likely to be mirrored elsewhere, found that a quarter of respondents needed help when trying to open packaging. Four in 10 respondents actually hurt themselves during the process because they had to use a tool to access the contents.

Many types of package combine security (including safe storage of the contents) with accessibility. However, in many cases the design could be further improved. For instance, many bottles, from milk to medicine, now come with a tamper-evident seal. These take many different forms. At its most basic, it can be a metallised cover. To gain access to the contents, the user merely pierces the seal, using a fingertip or blunt tool. (A good example is the seal that protects freeze-dried coffee.) While this is effective in protecting the contents, it means they may be too easily accessible, to children.

An alternative is to use a more robust design such as a peelable seal. However, this may make it more difficult for an elderly person to access, as it is fixed firmly in place. Elderly people, with poor grip strength, may need a knife or scissors to remove it. This can lead to injury.

One technology that overcomes this is induction cap sealing. It fixes a multi-layer laminated liner to the container rim, using electromagnetic heating. The amount of heat can be varied, to strike a balance between adequate seal strength and ease of opening. The use of a large ‘half-moon’ tab on the liner further boosts accessibility and can also be printed with access instructions.

Accessible design guidelines can be applied to all types of packaging, including bottles, tubs, sachets and jars, to make it easier to open.

Contoured bottles, or those with indentations in the body, are easier to grasp, and so are easier to open. A larger lid also eases the process of opening, as less force is required to grip it. However, bottle and cap should not be too large.

While a medicine bottle is used far less frequently than, say, a coffee jar, its contents may be critical to health. Therefore, it needs to be easily accessible, while also being safe. While ‘push and turn’ caps offer high security, they require the user to perform two simultaneous actions, which may be difficult. It is more sensible to open it in two separate steps. For instance, lining up two arrows by twisting the cap into position, then pushing the cap off the bottle.

Metallised lids are commonly used on products such as yoghurt but need a large enough tab for the user to grip. These can be further improved by adding a texture to the tab, which increases the gripping force.

Flexible packaging can also be difficult to open. Opening a crisp packet can be a challenge, so many similar packages are designed to be torn open. To make this even easier, the tearing point can include a ‘starter’ slit – or serrated edge – and be brightly coloured.

There are many other examples, ranging from ring-pull cans to labelling information, that can be made more accessible.

Accessible design guidelines would, at first glance, appear to undermine the whole reason behind creating a safe, impenetrable packaging. However, with clever design, and using the many techniques available, packaging designers can ensure their products maintain functionality while being as user friendly as possible.