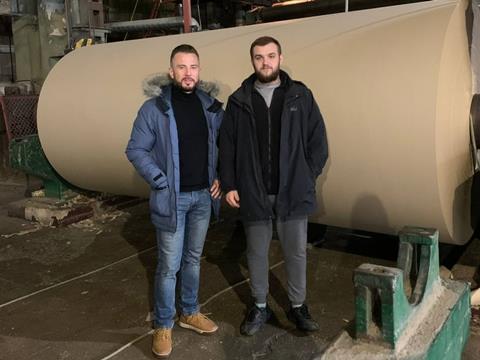 Ukrainian-based paper manufacturer Releaf Paper has been awarded a €2.5 million grant from the European Commission’s EIC Accelerator 2022 programme for its pilot line project to extract cellulose from the fibres of fallen leaves.

With the project expected to cost €3.5 million, the European Commission will provide over half of the necessary funding – as well as an additional investment to scale the project that may raise the total amount as high as €10 million.

The development comes after Releaf Paper began exporting its products to EU countries in the wake of the Russian invasion of Ukraine. However, the company does not yet have its own production facilities, and the investment funds from the EIC Accelerator will be used to build two European factories within the next five years.

As of right now, the company’s founders are choosing the locations for their factories – Germany and Poland are listed as likely contenders – and expanding their team. The first installment of the grant will be paid in April 2023 to cover the following two years.

The European Commission’s EIC Work Programme has set aside a total of €1.7 billion to distribute amongst “breakthrough innovators” with the aim of scaling up their projects and creating new markets or disrupting existing ones. The EIC Accelerator sub-division is worth €1.6 billion in total and is dedicated to start-ups and SMEs.

“Each year thousands of startups and representatives of small and medium-sized businesses from all EU countries apply for funding from the EIC Accelerator,” explains Alexander Sobolenko, co-founder and director of sales and business development at Releaf Paper. “Statistically, about 1-1.5% achieve success.

“In addition to the Releaf team, consultants from CIVITTA, a leading management consulting company in Central and Eastern Europe with headquarters in Estonia, also joined the project team. This became an important success factor.

“The selection process lasted over 7 months and included 2 rounds of validation and a final interview with five experts representing Western European VCs. As a result, Releaf Paper beat out more than 6,500 competing companies and received the coveted funding. We can finally start building our pilot production line.”

“We are closer than ever to the goal of starting a series of our own factories of the new generation, where the paper of the future, Releaf paper, will be created,” says CEO and co-founder Valentyn Frechka. “When at the end of this year everyone is talking about reducing carbon footprint, deforestation and stopping environmental catastrophe, we are taking real steps to revolutionize the paper industry!”

Sobolenko previously told Packaging Europe about his own and Releaf Paper’s experiences in light of the disruption caused by the conflict. At the time, he was unsure what lay ahead for the company, having lost contact with various business partners.

However, he stated that it would sell off its remaining paper stock and donate the proceeds to those affected by the war, suggesting that buying Ukrainian-made products was the best way for the packaging industry at large to show its support. Two months later, Releaf Paper was awarded $100,000 from the Google for Startups Ukraine Support Fund.

In September, the company launched a dedicated webstore to sell its paper bags to customers in the UK and EU. The product is intended to appeal to small-to-medium-sized businesses selling clothes, cosmetics, handmade goods, organic food, and similar consumer goods.

Releaf Paper was also a finalist under the Renewable Materials category at the Sustainability Awards 2022.