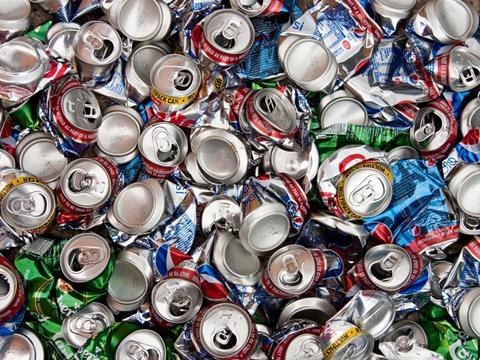 A report commissioned by Metal Packaging Europe and European Aluminium has suggested that an overall recycling rate of 72.8% for aluminium beverage cans was achieved in the EU, UK, Switzerland, Norway, and Iceland in 2020, saving 4.2 million tonnes of CO2eq. However, this is thought to coincide with a 9% increase in can consumption, and a 3% decrease in the recycling rate, since 2019.

Members of both organisations – can manufacturers and their aluminium suppliers, respectively – have emphasised that, in line with new EU recycling rules, most EU Member States are reporting their figures at the point of entrance of a recycling facility, rather than the collection phase. As such, rates of recycling are said to have dropped for most packaging materials, and although the consumption of cans has increased, so has the total tonnage of cans recycled.

It is also claimed that, with the aluminium recycled from cans reaching a ‘record level’ of 510,000 tonnes, the carbon dioxide equivalent saved represents the same amount of greenhouse gas emissions produced by a European town of nearly half a million inhabitants, such as Toulouse or Gdańsk.

“We are fully supportive of the new EU recycling reporting rules as these measure ‘real’ recycling and we are pleased to notice that this has resulted in only a very minor and likely only temporary drop in the can recycling rate,” said Léonie Knox-Peebles, CEO of Metal Packaging Europe. “The aluminium beverage can already meets the highest recyclability performance grade of 95% as proposed in the new draft for a Packaging & Packaging Waste Regulation.

“As aluminium beverage cans are fully circular and can be recycled endlessly without losing the aluminium’s inherent properties, we are confident that even in a growing market we will be able to meet our 100% beverage can recycling ambition by 2030.”

Maarten Labberton, Director Packaging Group at European Aluminium, added: “With more and more countries turning to Deposit Return Systems (DRS) we will be able to recycle more cans via a can-to-can remelting solution, generating maximum environmental benefits and we are calling upon those countries with classic EPR systems to invest more into the collection and sorting of the whole aluminium packaging fraction in order to fully close the material loop.

“Although we are surprised by the unfounded high reuse targets in the new EU proposal, we welcome the obligation to collect 90% or more of metal and plastic beverage containers for recycling, preferably via DRS. A Deposit Return System should be balanced, which means that it should be run by an independent operator, have variable deposit fees and no cross-subsidies between the materials concerned.’’

Alupro previously reported a 68% recycling rate for aluminium in the UK in 2021, with over 156,000 tonnes collected for recycling. Beverage cans were thought to be the biggest contributor, with the company asserting that 82%, or four in five, were recycled.

Last year, European Aluminium and Metal Packaging Europe released a joint roadmap towards achieving a 100% recycling rate for aluminium beverage cans by 2030. Its four areas of interest included the improvement of kerbside and on-the-go waste collection systems and an increase in efficiency for sorting infrastructure.