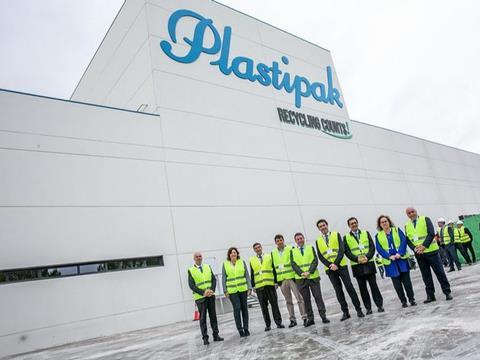 Plastic packaging and recycling company Plastipak has announced the opening of its new recycling facility in Toledo, Spain, which will convert PET flake into food-grade recycled PET (rPET) pellets suitable for direct use in new preforms, bottles and containers.

The formal opening was conducted by Don Emiliano García-Page, President of the Castilla-La Mancha Region. The new recycling plant will apparently produce 20,000 tonnes of food-grade recycled pellet per year and will aim to eliminate recycled resin transport-related emissions since it is co-located at Plastipak’s current preform manufacturing site.

Pedro Martins, Plastipak’s executive managing director for Europe, said: “The use of rPET is a key tool in reducing our customer’s Scope 3 related emissions and forms an important part of their ESG-packaging related commitments.

“As well as supporting our customers to reduce their financial obligations under the planned Spanish plastics tax, the plant will also contribute to the meeting the minimum recycled content levels mandated by the Single Use Plastics Directive.”

The facility reportedly incorporates advanced energy-saving technologies and equipment including the rooftop installation of over 1800 photovoltaic (PV) solar panels.

Plastipak says that the PV panels are expected to generate more than 1339 MWh of electricity per year that will be consumed on-site, seeking to save more than 443 tonnes of CO2 per year through avoiding consumption of electricity from the national grid, in addition to using 20,000 tonnes of recycled resin instead of virgin resin.

Jack Pacente, vice president of global sustainability, explained: “Already, 100 percent of the electricity Plastipak consumes in Europe originates from renewable sources, and the installation of PV panels is our second on-site renewable power generation project in the European region.

“Long-term emissions reduction is a core pillar of our ESG programme, demonstrated by our registered commitment to the Science-Based Target Initiative.”

Plastipak also launched its metal-free aerosol container in October, which it claims is fully recyclable – and back in March, plastic packaging firm ALPLA announced the expansion of its PET bottle recycling capacity in Germany.