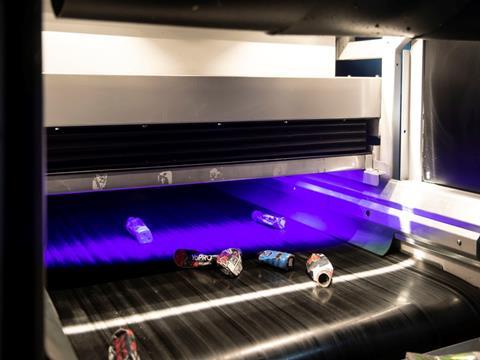 The HolyGrail 2.0 initiative has successfully validated the prototype detection unit for digital watermarks after semi-industrial testing that mimics real-life conditions, with a 99% detection rate and the opportunity to develop new, more granular post-consumer recycling streams that do not yet exist.

Digital watermarking works through small, imperceptible codes covering the surface of consumer goods packs, which can carry attributes such as manufacturer, stock-keeping units (SKUs), plastic type, composition, and usage. The initiative began in 2020 and is overseen by AIM – the European Brands Association and the Alliance to End Plastic Waste, and is supported by over 130 companies and organisations. This includes Procter & Gamble, which recently announced that it would incorporate digital watermarking into its Lenor brand products.

The semi-industrial tests of the Pellenc ST/Digimarc prototype started in October 2021 at the Amager Resource Center in Copenhagen, with the purpose of evaluating the technology by replicating real-world industrial conditions. The prototype detection sorting unit was first validated in 2021, before its installation for the semi-industrial trial.

HolyGrail 2.0 says that comprehensive testing was successfully performed on approximately 125,000 pieces of packaging from 260 SKUs at 3 m/s belt speed, with soiling/crushing and throughput representing routine industrial operations. Additional tests were also performed at a higher belt speed of 4.5 m/s, with severe soiling and crushing, reportedly without loss of performance.

Validation tests started in January 2022 as the concluding evaluations of the semi-industrial tests, focusing on the readiness of the Pellenc ST/Digimarc prototype for deployment in large-scale pilots in commercial sorting and recycling facilities. The assessment criteria included detection efficiency, ejection efficiency, purity, prototype stability and routine function, ease of programming the sorting operation, and counting capabilities of the prototype.

In addition, HolyGrail explains that the ejection operation test included a software combination of digital watermark detection and near-infrared (NIR) detection to identify both watermarked and non-watermarked items, as would be encountered in an industrial sorting or recycling facility. Based on observations from the January tests, the combined signal of NIR/digital watermark detection was apparently refined to improve the purity of the sorted output.

Final validation tests were completed this month at the headquarters of Pellenc ST, where detection/ejection efficiency and purity for sorting PET, PP and PE rigids and flexible films were evaluated. The initiative says that each category was sorted at 3 m/s, at as close to nominal throughput and occupancy as feasible for the prototype system setup.

Each category had set parameters for the combination of digital watermark detection and NIR detection, as well as for ejection. The sorting programme was configured to eject or reject items on an SKU-specific basis.

According to the HolyGrail initiative, the results of the trials show that the digital watermarking technology can achieve more granular sorting of packaging waste at scale, such as developing separate and new post-consumer recycling streams that currently do not exist. This could include separate streams for applications such as cosmetics and detergents. The initiative claims this will help to overcome the limitations of current NIR sorting technologies, supporting a circular economy for packaging.

The initiative adds that “consistent high results” were demonstrated across all testing categories of plastic packaging material. On average, there was a 99% detection, 95% ejection and 95% purity rate for the first prototype. Flexibles showed a slightly lower ejection rate (91%) and purity (90%) than the rigid categories.

The detection unit – developed by the machine vendor Pellenc ST and the digital watermarks technology supplier Digimarc – is reportedly now ready for industrial-scale pilots, which are slated to start later this year. Details on industrial partners and packaging scope are set to be released soon.

Michelle Gibbons, director general of AIM, comments: “We have achieved our objective of proving digital watermarks can increase intelligent sorting of packaging waste at scale, enabling new recycling streams that currently do not exist. This would be a fantastic leap forward in achieving the EU recycling goals.

“Innovation and digital are the core drivers towards the Green Transition and this has been brought to life through HolyGrail 2.0.

“Now, market participants can decide to be part of industrial-scale pilots, to test this at an even bigger scale in Europe.”

Jacob Duer, president and CEO of the Alliance to End Plastic Waste, adds: “The completion of the semi-industrial trials is a very important milestone in the HolyGrail 2.0 initiative. We are one step closer to making intelligent waste sorting a reality through digital watermarks.

“The HolyGrail project is an excellent example of how engaged and committed businesses coming together around a very clear goal can accelerate the development of new solutions.

“As we move into the next stage of in-market demonstrations, we strongly encourage more businesses and partners to join us in scaling up testing and adoption.”