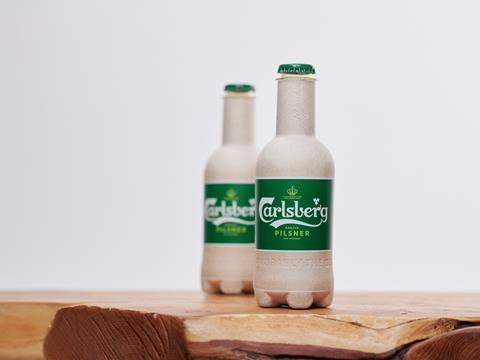 Carlsberg Group has announced that the Generation 2.0 Fibre Bottle, a paper-based bottle with a new plant-based PEF lining developed with Paboco, Avantium, and the Paper Bottle Community, will be available for sampling by 8,000 consumers and stakeholders across eight pilot markets in Western Europe.

Previous versions of the Fibre Bottle, such as the first-generation design for The Absolut Company’s pre-mixed cocktail drinks, consisted of approximately 57% paper with a plastic mouthpiece and PE barrier inside the bottle. While the first-generation bottle could be recycled in some paper streams, this means the plastic components are not recycled.

According to Carlsberg, the new, next-generation Fibre Bottle features a plant-based PEF polymer lining developed by its partner Avantium, which joined the Paper Bottle Project in 2019. The companies claim that PEF is made entirely from natural raw materials, is compatible with plastic recycling systems, and can degrade naturally if it ends up outside recycling systems.

In addition, the companies say that PEF functions as a highly effective barrier between the beer and the fibre outer shell, apparently protecting the taste and fizziness of the beer better than conventional fossil-based PET plastic. The outer shell of the bottle also reportedly offers insulative properties that can help keep beer cooler for longer compared to cans or glass bottles.

The outer shell of the bottle is produced by Paboco and, according to the company, consists of sustainably-sourced wood fibre. Earlier this year, Paboco became a member of the 4evergreen Alliance aimed at boosting circularity and the recycling rate for fibre-based packaging.

Currently, the cap of the Fibre Bottle – which Carlsberg says is necessary to ensure the quality of the product – is not bio-based. However, the bottle and cap are allegedly full recyclable.

A new pilot launched by Carlsberg will see the Generation 2.0 Fibre Bottle sampled in eight Western European markets: Denmark, Sweden, Norway, Finland, the UK, Poland, Germany, and France. The bottles will be supplied to local consumers, customers, and other stakeholders through select festivals and flagship events, as well as targeted product samplings.

Carlsberg says that testing at this scale will give it the opportunity to gather feedback on people’s experiences of the product, which will inform the next generation of design.

Stephane Munch, VP of group development at Carlsberg, says: “We are delighted to bring our new Fibre Bottle into the hands of consumers, allowing them to experience it for themselves. This pilot will serve a greater purpose in testing the production, performance and recycling of this product at scale.

“Identifying and producing PEF, as a competent functional barrier for beer, has been one of our greatest challenges – so getting good test results, collaborating with suppliers and seeing the bottles being filled on the line is a great achievement!”

For the subsequent Generation 3.0 Fibre Bottle, Carlsberg and its partners from the wider Paper Bottle Community are exploring fibre-based bottle caps with a generic solution slated for 2023. In March this year, Pabaco announced a next-generation prototype paper bottle with a paper screw cap from Blue Ocean Closures that can be used for applications such as cosmetics, home care, and still drinks; the rollout of this solution is also expected in 2023.

Carlsberg adds that, when the Fibre Bottle is commercialised at scale, it intends for the solution to expand its consumers’ choices and complement, rather than replace, existing packaging like glass bottles and cans.

Simon Boas Hoffmeyer, group sustainability director at Carlsberg, concludes: “The progress made with our new Fibre Bottle is testament to Carlsberg’s pioneering spirit, with a focus on making better products in every sense of the word.

“We’ve been working hard on this project since 2015, and aim to continue to set the industry standard by further improving the bottle’s environmental footprint and product performance.

“Collaboration is key and, together with our partners, we’re excited to see how research and development into sustainable packaging solutions is now becoming the norm.”