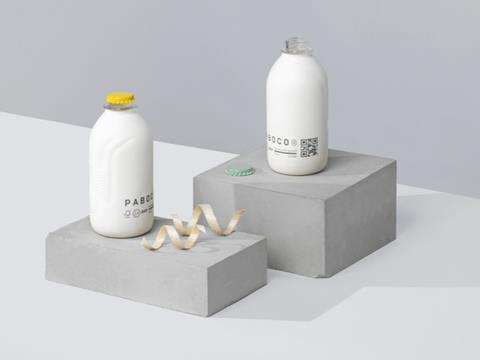 Paboco, the company behind the development of paper bottles for Procter & Gamble, Absolut, and The Coca-Cola Company, announced earlier this week that it is joining the 4evergreen Alliance aimed at improving the circularity of fibre-based packaging.

Paboco joins other companies including Amcor, BASF, Danone, DS Smith, Ferrero, L’Oréal, Mars, Mondi, Nestlé, P&G, TOMRA, and Tetra Pak, which are just some of the members of 4evergreen’s cross-industry initiative. The 4evergreen Alliance brings together actors across the value chain, ranging from producers and convertors to research organisations, with a particular focus on European packaging systems.

Currently, the 4evergreen Alliance says that 82% of paper and board packaging is recycled.

Paboco started as a joint venture between paper packaging materials developer BillerudKorsnäs and bottle manufacturing specialist ALPLA. In 2020, Coca-Cola revealed a first-generation prototype paper bottle developed with Paboco, with a European trial launched the following year. The prototype is 100% recyclable, but it is not yet entirely fibre-based – it consists of a paper shell made using sustainably sourced wood, with a rPET lining and bio-based material barrier suitable for liquid contents.

Last year, Procter & Gamble collaborated with Paboco on a paper bottle for its Lenor brand, which features a similar structure of an outer layer of paper and an inner layer of plastic. The company plans to trial the bottle in Western Europe in 2022.

Meanwhile, Absolut’s paper bottle developed with the Paboco group is made from 57% paper and can be recycled in some paper streams, although this will mean the plastic making up the mouthpiece and inner barrier will not be recycled unless consumers return it to the place of purchase for separation. According to the companies, the next phase for the bottle will involve a paper neck, as well as an integrated plastic barrier that could be made from virgin plastic unless a stable, bio-based barrier alternative is available.

Commenting on the partnership with 4evergreen, Gittan Schiöld, CEO of Paboco, says: “We are at the beginning of an industry shift moving towards low-carbon, circular and fibre-based packaging applicable in new areas such as bottles.

“To justify these shifts we need to collaborate across the value chain to ensure the most sustainable life cycles where recycling plays a key role.

“Paboco is joining 4evergreen to put paper bottles on the map and to define the future route for recycling of such new packaging types as well as inspire industry peers to challenge conventional.”

Paboco’s membership of the 4evergreen Alliance appears to be part of its ongoing aim of expanding the paper content and streamlining the recycling of its bottles as it develops future prototypes.