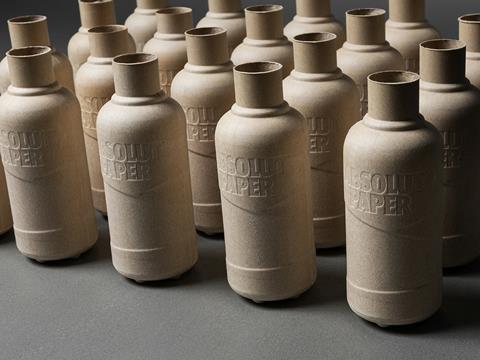 Absolut is expanding into fibre technology through its collaboration with paper bottle company Paboco. The spirits’ brand is working alongside Calsberg, Coca Cola, L’Oreal and P&G towards a fully bio-based and recyclable paper bottle for its pre-mixed cocktail drinks.

The bottle is still in its first-generation iteration and is made from 57% paper, containing plastic in the mouthpiece and the thin barrier inside the bottle. They aim to do a bigger pilot in approximately a year-and-a-half from now, with the next-generation bottle following a year after that. Although the launch of the final bottle will depend on when the appropriate bio-based barrier is found, director of future packaging at The Absolut Company, Louise Werner, says is difficult to estimate but should be a couple of years away.

“This is our steppingstone, you could call it,” said Werner about the initial-phase product. “The first version- the first generation- is not perfect,” she explained. “We’re starting here, we’re learning here, we’re scaling here, to be able to move to the next generation.”

In this first phase, the bottle will be able to be recycled in certain paper streams, but that will mean that the plastic will not get recycled. To recycle both the paper and the plastic, consumers will have to return the product to the place where they had bought it from to separate the materials. In the next phase, the bottle will have a paper neck, and an integrated plastic barrier potentially made from virgin plastic until a stable, bio-based barrier is found to replace it.

The barrier and the cap have been the key areas of improvement in the development process so far. Finding a suitable barrier depends on many factors, Werner explained, including the availability and recyclability of materials. “I think here the barrier really is the holy grail of this project because the paper part of it, there we’ve had very few issues,” she said. “So, it’s a barrier that we need to figure out.”

Since paper can withstand a limited amount of pressure, finding an appropriate cap has also been challenging. “We could probably use a crown cork,” she said, “but since we know that we’re moving away from the crown cork in the next generation, we are now exploring other capping alternatives, so basically screwcaps.”

Although the company hopes to explore this packaging solution with some of its higher alcohol products in the future, there are no plans to transition completely to fully bio-based, recyclable paper bottles. “I think that, looking ahead, we know that our glass bottle, it’s our heart, it’s our heritage,” Werner said.

“And glass has so many advantages, especially if you look at our higher spirit products, like, for example, our original,” she added. “There, if you look at it from a consumer side of things, that product can be standing in someone’s home for years.” Werner went on to say that Absolut’s focus is on expanding its range of packaging rather than moving away from its existing packaging entirely.