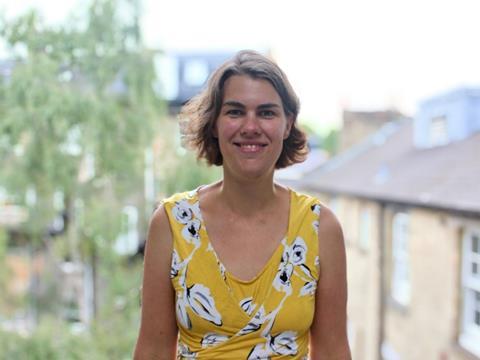 Catherine David, director of collaboration and change at WRAP.

Packaging Europe attended Coca-Cola Great Britain’s Real Talk event in London in early December, which focused on reduce, reuse and recycle in packaging. At the event we spoke to Catherine David, director of collaboration and change at WRAP, to gain her insights on sustainability challenges and solutions.

To start with, what do you think are some of the biggest sustainability challenges at the moment?

From my perspective, Net Zero. In the UK, through WRAP’s 2030 program [the Courtauld Commitment 2030], the food and drink sector is committed to a 50% reduction in its footprint by 2030. That’s in line with a 1.5 warming degree scenario and government targets.

Achieving that is going to require a load of actions by businesses, particularly their Scope 3 emissions.

It’s a true system transformation that’s going to affect every single one of us as consumers of food and drink, but also every single person working in the business, because it’s to do with the energy usage score, the kind of products that are purchased, the packaging they’re in.

For me, it’s the big existential challenge of our generation, and it’s going to require action across a number of fronts with a high degree of complexity.

I’m hoping that as a sector we’re moving forward. In some ways the sustainability paradigm implies a world where we can continue with some kind of status quo – whereas I think it’s about creating a future which is resilient in a changing climate, and which enables life on earth and the other species on earth to continue.

What does this mean for packaging?

I think we need to drastically reshape our packaging systems to take out single use plastics. That’s one top priority, and we need to scale circularity.

Packaging is 100% part of this picture, part of the solutions – but it’s not going to happen unless we make it happen. The market isn’t going to naturally take us to that place; we’re going to have to use all our ingenuity and collaboration and innovation to get there.

How important do you think collaboration is - between brands, consumers, companies - to tackle all these different challenges?

We want it to be really simple, really straightforward, fit into daily life and be as convenient as possible. That’s one reason why collaboration is key, particularly to achieve the pace of change we need.

Whilst competitive energy helps a lot, because you get the best competitive brains between different brands and organisations taking part, ultimately what we need is for everyone to pull their learnings – and we need to quite quickly weed out which are the winners, and scale those.

We just don’t have time for market forces to do their best.

Particularly with consumers, you introduce a DRS scheme and design it optimally - if you don’t help people engage with it, and realise the benefits of it, it won’t work. That is where people communications can play a role.

Then you risk people not doing the right thing, because people are so busy, and so confused, and also really inconsistent in their behaviours. 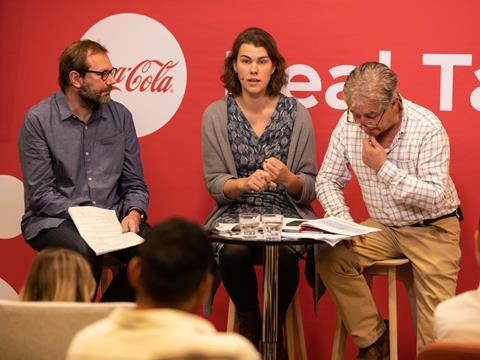 The themes today have been reducing, reusing, recycling – what progress has been made in packaging to help with that? How could well-designed packaging help?

We’ve just published our UK Plastics Pact annual report, and there’s loads of examples there of how brands are redesigning products.

Aldi removed the shrink wrap on four pack baked beans. Removing shrink wrap is a really good opportunity and some brands have been experimenting with still doing multibuy, so you can get the benefits of the price promotion and buying four, just without that shrink wrap.

We’ve focused on elimination being key, and secondly on the infrastructure to recycle plastic film and make it more circular.

Retailers are collecting it from the store and we’ve done campaigning through Recycle Now to drive up engagement. We’re starting to see over 10% of the UK public now engaging with that, which is good.

We’re starting to trial kerbside collection of plastic bags and wrapping, so we’re going to learn a lot from that. We’ve got to get ready and make sure at the back end, we’re able to turn the packaging waste back into ideally food grade plastic.

We’re not quite there yet, and in the meantime we need to try and cut it out. So that’s why it’s great to hear that Coca-Cola have made the choice of substitution because getting rid of some hard to recycle plastics is ideal.

We did an interesting pilot of a behavioural intervention called the ‘Don’t Know Box’. You provide a box for people’s households to put items in they’re not sure about. Our research shows us that people contaminate the recycling quite heavily and it’s because they don’t know.

With the ‘Don’t Know Box’, you put your items in, and you get that little bit of feedback from your local authority about recyclability when they collect it.

One of the things that’s really going to help is when we have consistent collections. When it’s consistent, you can run a Recycle Now campaign, all the brands can get behind it with consistent messaging, with ‘you can’ or ‘you can’t’ and ‘here’s how you do it’.

Touching on what you mentioned earlier with the UK Plastic Pact, one of the goals in the European Plastics Pact is for companies using plastics to achieve at least 30% of recycled plastics by weight in products and packaging. How might that be achieved, what would be some good ways to work towards that?

We tend to work with this Target – Measure – Act philosophy. So set up a target […] make your progress against that – and then it’s the action bit. There’s a design question, a business model question, and an engagement question, and I think brands can and are acting on that.

There is a need for ongoing infrastructure development to ensure product availability, but by and large the solutions are there, and I’m enjoying seeing that commitment borne through. I often get asked, ‘are you seeing companies backtrack from these kind of commitments, given all the cost pressures?’

As far as I’ve seen, that’s not happening. These are long-term strategic structural decisions businesses have taken to shift their approach – product design, sourcing, business model – so I’d expect those commitments to be met.

What improvements do you think could be made to existing products and infrastructure to help?

Specific to the Coca-Cola space and drinks bottles and cans sector, this scaling blueprint - there’s a lot that can be done with standardisation.

In the space of soft plastic, plastic film, bags and wrapping - more infrastructure is needed, particularly in the UK. This year is the first time that over half of what we generate has been recycled in the UK domestically, but we want to massively increase that.

What solutions would you like to see implemented at scale, and for consumers?

Take the plastic out of the fresh produce aisle. I can’t say that too often. Implement that at scale and we’ll save food waste and reduce plastics.

On the refill and reuse side, I’m tantalised [by] the project Sam [Jones, Coca-Cola Europacific Partners] mentioned earlier, because I would love to see standardised, scaled refill and reuse solutions within the next few years that are communicated to citizens in a really joined-up holistic, well-coordinated, inspiring, exciting way.

It makes them feel like they are winners, saving money and having better choices.