What’s next for Coca-Cola Europacific Partners in terms of ‘reduce, reuse, recycle’? 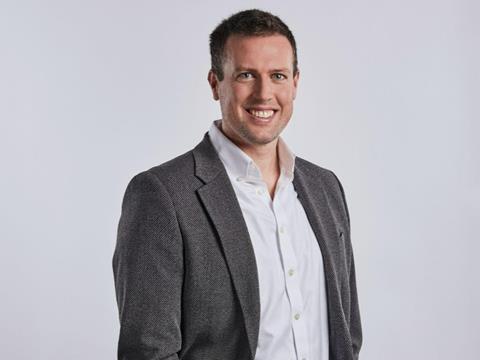 Packaging Europe attended Coca-Cola Great Britain’s Real Talk Event in London in early December, which focused on reduce, reuse and recycle in packaging. At the event, we spoke to Sam Jones, head of climate and sustainability in Great Britain at Coca-Cola Europacific Partners (CCEP) about consumer behaviour, the company’s aims towards the 3 Rs and future plans.

To start with, what do you think are some of the biggest sustainability challenges at the moment?

I’ve worked in sustainability for about 12 years, and when I started, sustainability strategies were all considered equal. What you see now is the Net Zero targets or any company’s climate change targets sit on top of everything else.

Joe [Franses, vice-president of sustainability at CCEP] mentioned in a panel today that the Coca-Cola company has a refill target, 25% by volume by 2030. Even that is a means to an end. The destination isn’t refill, the destination is refill for carbon.

What are the key challenges around this?

If you look at things through the waste hierarchy and the UK at the moment, deposit return schemes – other than EPR – are the single biggest topic. It’s taken 5, 6 years to get one nearly in place in Scotland – it’ll probably be another couple of years after that before we get one in England and Wales.

That’s all focused on the top of the waste hierarchy, getting recycling rates better. At the same time, a lot of conversations have come in around reuse and refill, and package-less systems.

That can’t take as long to come in place, because they haven’t got long enough for those things to deliver. All our analysis tells us that those dispense systems, the refill, reuse systems are the lowest carbon way of distributing soft drinks.

We do need to get there, if we go back to Net Zero being the most important thing; but we’re telling consumers and policymakers that recycling is the biggest thing – how quickly can refill catch up, overtake, be on the statute book?

It feels like there’s almost two races to run at once, and this race probably needs to run faster.

How important do you think collaboration is - between brands, consumers, companies - to tackle all these different challenges?

Before my time you got Betamax and VHS, then DVD and Blu-Ray […] lots of areas where there’s basically two versions of the same solution to the problem, and one has always won out.

Why don’t we collectively learn from that [and] design something at the outset that works for everyone?

It’s never going to be the solution that lasts. Aside from all the pre-competitive things, collaboration is just what makes sense, it’s the only way we’re going to do it – so the sooner we recognise that, the better.

The themes today have been reducing, reusing, recycling – what progress has been made in packaging to help with that? How could well-designed packaging help?

We can share some practical examples - the most recent one is all of our bottles now going out across the UK have an attached cap.

Caps historically have been a badly littered item because people take them off, drop it, throw it, they fall out – and they don’t get recycled very well because they literally fall through the gaps in the materials recycling facilities, so leaving the cap on, making sure it’s attached, you’ve got to really go some to pull it off.

It means we reduce litter, there’s a faster production associated with that, increased recycling (though maybe it’s not food grade to start with, more HDPE can go back into the system).

We’ve also changed the colour of one of our bottles – the Sprite bottles last year changed from green to clear to improve recyclability.

This ties into the relationship between brands, how to talk to consumers, and how brands have to take some risks. The bottle possibly doesn’t stand out on the shelf now as much as it once did, but it’s the right thing to do.

Another example: We used to shrink wrap all of our multipacks with soft plastic that maybe would be recyclable now in one of the front of store collection schemes, but not in many kerbside schemes.

We’ve moved pretty much all of those (the last one should move in January) to boarding packs, which comes with contradictions. We take a hit from a carbon perspective, but from a recyclability perspective it’s absolutely the right thing to do, because most people can recycle cardboard at home. 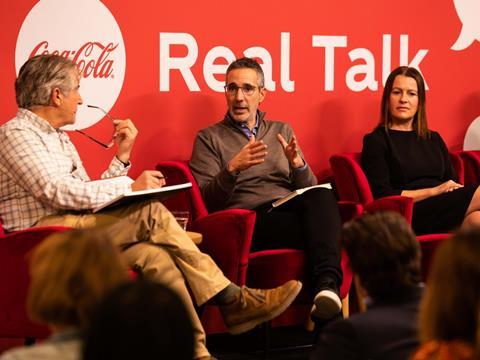 Touching on the European Plastics Pact, one of the goals for companies using plastics is to achieve at least 30% of recycled plastics by weight in products and packaging. How might that be achieved?

Maintaining that level of commitment has to be a conscious business decision. It’s a decision that’s made – and challenged – right at the highest level.

We’ve got a clear road map over the next two years to get from where we are today – across the small and larger averages at just over 60%, we know where and when we’ll get to 100%, all being well in terms of inflation pressures and availability.

Availability is the big constraint that drives pricing, and if we get DRS [deposit recycling scheme] in, we get better segregation; better throughput of materials domestically; then in theory should be in a better place to move to 100% at a price that is palatable for business.

One of your goals is to have 25% of all beverages globally sold in returnable glass, plastic bottles, or refillable containers through dispensers. How are you working towards that?

It’s a global target, in Latin America for example, [they] have a well-established universal bottle that’s returnable across brands, so they’re at a high percentage already.

Within Europe, you’ve got markets like Germany, Spain and France where there either is or there soon will be refillable legislation.

The UK provides a really challenging market in that there is no legislation on the table. At the moment we’ve run trials with Tesco, with ASDA, at a few competitions and events, we’re trialling lots of machines in some of our workplace institution environments at the moment.

We’re hoping to get another couple of trials in next year, and build on those. We work with other people across the beverage sector to find a solution that will work for all of us, and multiple retailers at the same time.

What improvements do you think could be made to existing products and infrastructure to help?

We were part of a Loop trial. After the trial, Tesco produced a summary report on what they’d learnt and the things they would like to see to try and scale refill. One point was that we needed industry to work together, which I think we’re all agreeing on, and the second was that we needed to scale quite fast.

They talked about a very rapid scale to drive the behaviour change, get people used to it, and maybe provide people with no option.

What solutions would you like to see implemented at scale, and for consumers?

My favourite three-letter acronym, which is DRS! I think if we get DRS into Scotland next year, make that a success, we get an interoperable scheme in England and Wales as soon as possible.

It should massively help to drive up those stagnating recycling rates, which are nowhere near as good as our friends on the continent, and also potentially becomes our behaviour change enabler for legal systems in future.

People will get used to taking packaging back, and having a value on something that you can’t just throw away or stick in a green bin.

Look out for a second interview from Coca-Cola’s Real Talk event later this week, where we speak to Catherine David, director of collaboration and change at WRAP, which partnered with Coca-Coca Great Britain for this event.