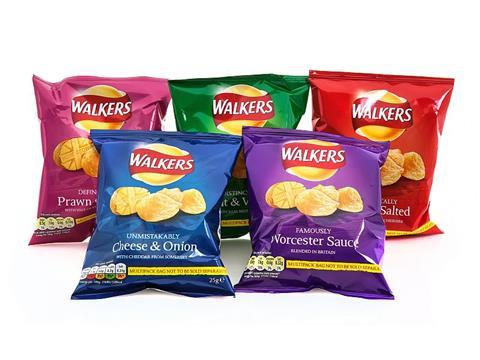 Walkers is set to launch the UK’s first nationwide recycling scheme for crisp packets. People will be encouraged to either drop off their packets at one of the hundreds of public access collection points that will be developed all around the country or alternatively post them for free in a box or envelope directly to TerraCycle for recycling.

Once the packets have been collected they will be cleaned, shredded and turned into small plastic pellets which will then be converted into useful plastic items, such as benches and fence posts. Under the scheme, developed in partnership with the recycling company TerraCycle, all crisp packets will be accepted.

The new recycling scheme will be up and running from December this year and full details of exactly how it will work and locations of the nationwide collection points will be announced nearer the time. Walkers’ long-term ambition is to make all of its packaging 100% recyclable, compostable or biodegradable by 2025. It is focusing significant resource on developing the technology and infrastructure to make this happen. Crisp packets are technically recyclable, the issue until now has been that they weren’t being separated or collected for recycling. Walkers’ investment is making this possible for the first time.

Ian Ellington, General Manager of PepsiCo UK said: “We share people’s concerns about the amount of plastic in our environment and are working on a number of both short and long-term solutions to reduce the impact of our packaging. Our new Walkers recycling initiative starts to tackle this issue right now by repurposing used crisp packets to create everyday items such as plant pots and benches. We hope people will embrace this idea and join us in ensuring crisp packets are recycled.”

“We’re determined to crack this in the long term and have a number of initiatives underway to create the right materials and environment for the crisp packets of the future.”

Laure Cucuron, General Manager, TerraCycle Europe: “We’re delighted to be working with Walkers to launch the UK’s first nationwide recycling scheme for crisp packets. We hope other snacks manufacturers will follow suit, by investing in new ways to reduce the amount of packaging that goes to landfill and incineration.”