The role of packaging in Aldi’s new ‘green’ supermarket 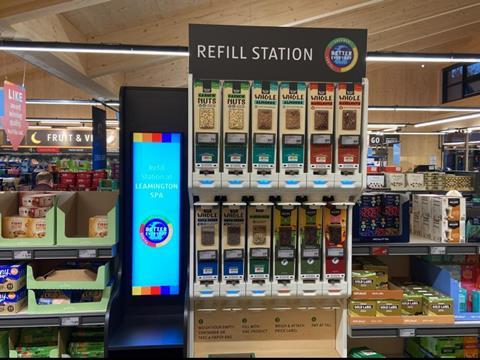 Aldi has opened a brand new ‘green’ supermarket which aims to reduce the average CO2 emissions produced by conventional supermarkets by two-thirds. What role is packaging playing in this novel concept?

The new supermarket is based in Royal Leamington Spa in the UK and includes a module made by Czech company Miwa, aiming towards zero-waste shopping for coffee, nuts, almonds and seeds in reusable containers.

Miwa’s solution consists of a refill station in the supermarket, with capsules containing different products. Customers can first weigh their empty container or bag, fill it with one of the products, then weigh it again, attach a price label, and finally pay at the till.

According to Miwa, the first contact between the British branch of Aldi and Miwa took place a year and a half ago. The pilot co-operation was supposed to start in autumn 2021, but was postponed due to Covid-19. Aldi reportedly tested Miwa’s zero-waste solution internally and finally decided to test it in a new supermarket near their UK headquarters. As well as an environmental motivation for customers, Aldi apparently provides discounts on food sold into customers’ own containers or paper bags.

Miwa’s solution, which it says has already succeeded in several European retail chains, is based on standardised reusable capsules – circulating between shops, the service centre and manufacturers – and on the maximum use of smart data. The company claims one capsule saves almost 2,000 pieces of single-use packaging during its life cycle.

Mirek Lizec, Miwa’s executive director, says: “For now, this is a pilot co-operation. The success and implementation in other Aldi supermarkets depends on how customers will react and also how comfortable and efficient our system will be for the store employees.

“The UK market is a bit further ahead in reusable packaging than, for example, the Dutch or Czech markets. But not by much, the whole field is still in its infancy stage everywhere in Europe.

“Public demands regarding green shopping are also increasing, which is gradually reflected in legislative requirements. There is a growing consensus that the mountains of waste associated with single-use packaging are not okay, and food manufacturers and chains must and often want to respond to this.”

Companies in other industries are also aiming to reduce CO2 emissions through innovations such as Smurfit Kappa’s new paper drying process, launched in October, and Tata Steel’s green steel solution which allegedly offers a 30% reduction in CO2 intensity compared to the European average.