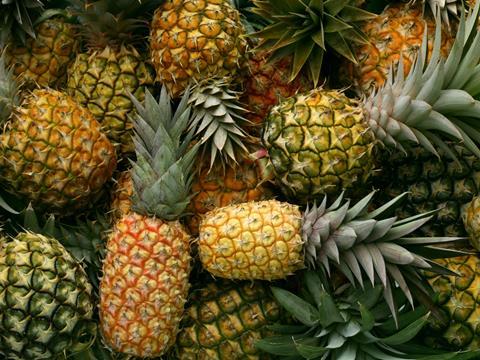 A team of scientists from the University of Alicante in Spain claims to have developed a food packaging material from pineapple waste that can increase shelf life. The ultimate goal of the project is to develop an edible film, and researchers are also investigating the material’s aroma-enhancing properties.

The group of researchers from the University of Alicante Department of Analytical Chemistry, Nutrition and Food Sciences has been working since the end of 2021 on a project centred on the development of natural bioaromas to increase the shelf life of fresh food and reduce food waste. The goal is to achieve new sustainable plastic materials of natural origin that, obtained from pineapple waste, both from the core and the rind, have synergistic natural active systems with dual action.

In this line, the researchers have achieved the first result of the project: a new material containing active natural compounds with antioxidant capacity. The plastic material not only has the capacity to be a container, but also to interact with the food it stores and to increase its capacity for preservation, thereby increasing its shelf life.

The project is currently in the validation phase by studying the impact of the material, which is being used to control the rancidity of packaged fresh food, such as red meat, which is being given a longer life cycle. On the other hand, the research is also studying the incorporation of aroma-enhancing active compounds, which would also come from pineapple waste, and which would be aimed at improving the consumer’s sensory experience through the sense of smell.

The project, “Development of natural bioaromas to increase the shelf life of fresh food and reduce food waste”, is led by researchers from the Department of Analytical Chemistry, Nutrition and Food Sciences at the University of Alicante, in collaboration with Anecoop group and with the participation of researchers from the international centres Sigma Clermont (France) and the Technological University of Panama.

In particular, the research group is made up of lecturers Ana Beltrán and Arantzazu Valdés, from the Department of Analytical Chemistry, Nutrition and Food Sciences; and researchers María Soledad Prats, Raquel Sánchez and Adriana Juan.

According to Valdés, their main objective is the development of edible films of natural origin with antioxidant extracts and aromatic capacity obtained from pineapple waste for subsequent application in the food packaging industry.

In the same vein, Beltrán reports that these residues could be a good source of antioxidant compounds, very useful in the prevention of oxidative deterioration of fatty foods, as well as a source of fruity and sweet aroma useful for incorporation into food products and active packaging as an aroma-enhancing additive in food and beverages. This gives a second life to residues that can exceed 50% of the total weight of each piece.

According to the research group, global food waste is estimated at 1.3 billion tons per year. This fact means the growing and worrying appearance of some problems for human beings, as they represent 8% of greenhouse gas emissions, 20% of freshwater consumption and 30% of global agricultural land use, as Valdés explained. Overall, the massive waste of resources and related environmental impacts have made food waste recovery an important environmental mitigation strategy to avoid economic losses and one of the most topical sustainable development goals.

In this context, food waste and residues of plant origin, such as husks, stems, seeds or bran, among others, contain potentially valuable components such as flavorings, phytochemicals and bioactive compounds with nutritional properties, antimicrobial and antioxidant activity favorable in the development of new functional materials with beneficial effects for food preservation, so they are a necessary way for the food industry to contribute to society with the generation of zero waste, address sustainability objectives and integrate into the concept of circular economy, Beltrán concluded.