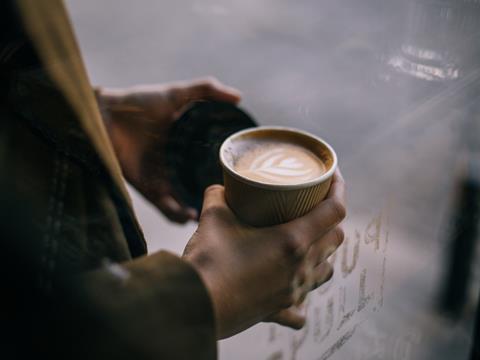 Engineers from the University of California, Irvine (UCI) have developed a composite material that mimics the expansion and contraction of chromatophores on the skin of squid that control infrared light and heat transmission, which it claims can be cost-effectively scaled for insulating applications such as beverage cups.

Developed in the laboratory of Alon Gorodetsky, UCI associate professor of chemical and biomolecular engineering, the infrared-reflecting metallised polymer film reportedly regulates heat through reconfigurable metal structures that can reversibly separate from one another and come back together under different strain levels.

“The mechanism is analogous to chromatophore expansion and contraction in a squid’s skin, which alters the reflection and transmission of visible light.”

These changes to chromatophore size help squids to communicate and camouflage their bodies to the point of appearing almost invisible, both to evade predators and hide from prey. According to the research team, the reproduction of this feature in the composite material allows for “tunable thermoregulation”, which apparently improves energy efficiency and protects consumers when handling hot surfaces.

The fabrication technique used by the research team involves depositing a copper film onto a reusable substrate such as aluminium foil and then spraying multiple polymer layers onto the copper film. The team claims that this enables cost-effective production at multiple scales, as the coper and rubber raw materials involved start at around a dime ($0.10) per square metre and the fabrication method can be applied to most batch sizes.

This makes the composite material suited to a range of applications, including beverage cups, restaurant to-go bags, parcels boxes, and evens shipping containers, according to the research team.

Gorodetsky adds: “The combined manufacturing strategy that we have now perfected in our lab is a real game changer.

“We have been working with cephalopod-inspired adaptive materials and systems for years but previously have only been able to fabricate them over relatively small areas. Now there is finally a path to making this stuff roll-by-roll in a factory.

“There is an enormous array of applications for this material.

“Think of all the perishable goods that have been delivered to people’s homes during the pandemic. Any package that Amazon or another company sends that needs to be temperature-controlled can use a lining made from our squid-inspired adaptive composite material.”

The team conducted coffee cup testing in the UCI laboratory to demonstrate that they could control the cooling of the coffee with the composite material. During testing, the team says they were able to predict and then experimentally confirm the changes in temperature for beverage cups. The tests reportedly achieved a 20-fold modulation of infrared radiation transmittance and a 30-fold regulation of thermal fluxes under standardised conditions.

In addition, Mohsin Badshah, a former UCI postdoctoral scholar in chemical and biomolecular engineering and lead author of the research paper on the composite material, says of the insulating solution’s impact: “The composite material can be recycled in bulk by removing the copper with vinegar and using established commercial methods to repurpose the remaining stretchable polymer.”

Last month, researchers from RMIT University, Tokyo Metropolitan University, and The KAITEKI Institute also unveiled a packaging material based on animal cells: an antibacterial nanotexture that mirrors the nanopillars on the wings of dragonflies. This structure can trap, stretch, and slice bacteria, destroying their membranes and thus killing them.