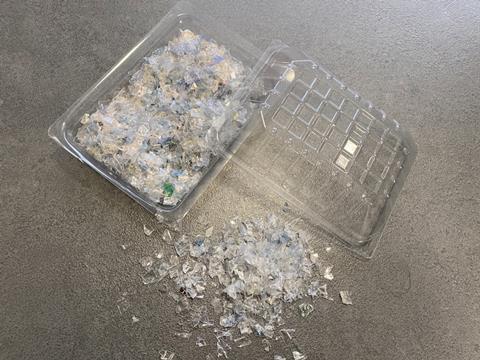 AMB explains that it expects demand for recycled bottles to divert rPET away from tray solutions, potentially disrupting its long-standing bottle-to-tray recycling solution. Notably, representatives from the European beverage industry have also called for a ‘first refusal’ mandate to allow it to meet its sustainability commitments, especially in relation to ongoing shortages of raw materials and price hikes.

In collaboration with an Italian recycler, AMB has launched an initiative to collect material from post-consumer trays with the aim of promoting the circularity of food-grade PET trays. AMB says the raw material comes from a 95% food tray stream and undergoes strict analysis to ensure its quality.

According to AMB, post-consumer tray material is then processed to avoid contamination and the quality of the flakes is evaluated. AMB assess the material for its impact on the extrusion process and its mechanical performance.

In addition, the new film is subject to evaluations of its optical aspect and quality, as well as its impact on the thermoforming process, the company says. AMB adds that these checks ensure that the mechanical and thermoforming performance on FFS remains unchanged for the final tray products, while the gauge is the same as for standard PET/PE.

AMB says that Tray Revive is part of its wider sustainability strategy, which includes improving collaboration and cooperation along the value chain and with its stakeholders, with the goal of improving and developing recycling infrastructure for packaging.

Last year, Tesco collaborated with Faerch on a closed-loop, tray-to-tray recycling solution for secondary plastic packaging used to transport and display products on shelves, in a bid to keep this material within the food packaging industry.