Coffee pods have lower carbon footprint than filter coffee, according to new study 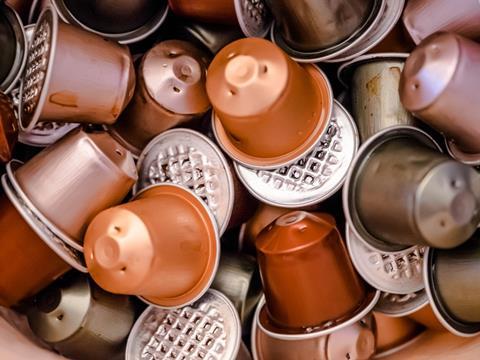 A new study has suggested that coffee pods result in fewer greenhouse gas emissions throughout their life cycle than those of filter, French press, and instant coffees.

The findings, which were originally revealed in The Conversation, are derived from calculations tracking the greenhouse gases emitted throughout the life cycle of coffee from its agricultural production to the washing of the cup it is served in – comparing the carbon footprint created in the preparation of traditional filter coffee (25 grams of coffee); encapsulated filter coffee (14 grams); coffee brewed in a French press (17 grams); and soluble or ‘instant’ coffee (12 grams).

Filtered coffee emerged as the product with the highest carbon footprint due to the high quantity of coffee powder used to prepare it and the amount of electricity used by a coffee maker to heat and maintain the temperature of the drink. When the recommended amounts of coffee and water are used, instant coffee is reported to be the most environmentally friendly option; a lower amount of coffee is used to prepare the final drink, a kettle consumes less water than a coffee maker, and the preparation of soluble coffee leaves behind no organic waste for disposal, according to the study.

However, in allowing for a 20% surplus of coffee and the heating of twice as much water as necessary – a measure implemented to account for overconsumption on the part of the consumer – coffee capsules are said to optimise the amount of coffee and water per serving. Drinking a 280ml brew prepared with a capsule is suggested to save between 11 and 13 grams of coffee.

While the findings acknowledge that coffee pods are largely single-use solutions and contribute to packaging waste, they also state that the CO2 equivalent emitted in the manufacture of a coffee capsule and its delivery to landfill is valued at 27 grams – far lower than the 59 grams of CO2e generated in the production of 11 grams of Arabica coffee in Brazil.

The production of the coffee itself is thought to generate anywhere between 40% and 80% of the total emissions of any type of coffee packaging due to the mechanisation, irrigation, and use of fertilisers that emit nitrous oxide during the growing process. Even so, consumers are advised to minimise their own contribution by switching to coffee capsules yet resisting the temptation to overindulge in the convenience of a capsule machine.

They should avoid wasting any coffee and hot water they prepare and should preferably utilise reusable capsules, or otherwise be aware of the options available for recycling single-use capsules in their local area.

Recent efforts have been made to further facilitate the recycling of coffee pod packaging. The not-for-profit Podback scheme sought to collect and recycle Pret A Manger’s aluminium at-home coffee pods via drop-off points or kerbside recycling, while Sainsbury’s adopted the same metal to package its own-brand coffee pod range in the hopes of increasing home recycling rates.

This year, AIMPLAS, the Plastics Technology Centre, manufactured a plastic film from used coffee grounds, set to be used in flexible packaging in an effort to encourage the conversion of urban biowaste at scale.