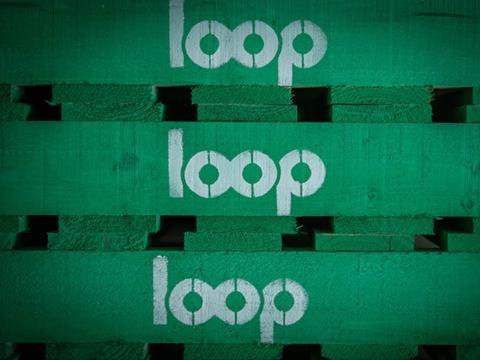 Bradfords and Tarmac are trialling the use of returnable LOOP pallets to move goods between their businesses and to some Bradfords customers across Somerset.

Trialled by Bradfords building supplies and Tarmac construction solutions, The Pallet LOOP was apparently founded on the principles of recover, repair, reuse, designed with the aim of helping the construction industry meet its target of net zero emissions by 2050 and eliminate packaging waste from the building material supply chain.

LOOP says it offers a range of 100% FSC pallets that have been purposely designed to carry various weights and types of material and engineered to be used multiple times. The pallets all follow the same design standards, making them safer to move, manage and stack, while helping to maximise lorry distribution capacity.

The company adds that The Pallet LOOP operates using a returnable pallet charge (RPC) that incentivises reuse. Attaching a value to the pallet, which is refunded at the point of return, provides a financial motivation for individuals and companies to put pallets back into the loop, rather than skipping or scrapping them after one use.

Giles Bradford, head of sustainability at Bradfords, said: “We see examples of both unsafe pallets and pallet waste every day across our sector. They’re a crucial enabler for the construction industry, but the evidence of stacks of pallets clogging merchant branches or being skipped on-site is only too apparent.

“We are delighted to be supporting the initiative and looking forward to seeing how the trial progresses. Developers and trades that end up in receipt of the distinctive LOOP pallets during the Bradfords [and] Tarmac trial should either return them to us on their next visit or look to load it onto a Bradfords vehicle the next time one visits their site, after which the refundable pallet charge will be credited.”

To service its pallet reuse scheme, The Pallet LOOP reportedly operates a network of collection sites and repair hubs nationwide. The company states pallets are taken back to the nearest site where they re-enter the pallet pool after being checked for damage. Once The Pallet LOOP is fully operational in early 2023, the pallet collection process will be the same as the trial.

Smaller developers and trades can return pallets to the merchant branch that delivered them or call to discuss backhauling when additional deliveries are made or vehicles are in proximity. Larger developers and principal contractors will be able to book a collection slot for multiple pallets to be picked up directly by The Pallet LOOP.

Back in November 2021, we reported on The Pallet LOOP’s features and aims before its rollout this year. Another development in the construction field in 2022 is Dulux Decorator Centre’s recycling scheme which it claims has surpassed over 1 million paint cans.