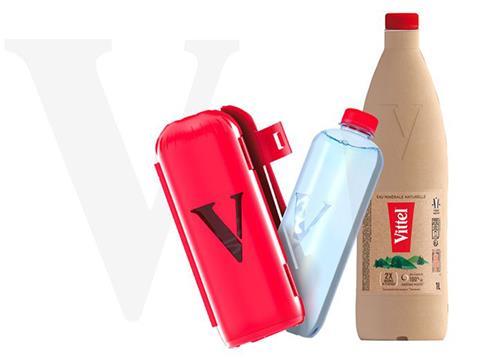 Nestlé has developed two new packaging innovations for its Vittel natural mineral water bottles with the goal of reducing its use of plastic while maintaining the functionality of traditional plastic bottles.

The first innovation is the Vittel GO system, which consists of a reusable hard protective case designed to hold 50cl refills of Vittel natural mineral water that are made with 40% less plastic than a traditional 50cl Vittel bottle.

Nestlé says that because the refills are made with as little plastic as possible, they are very flexible and light, which means they must be used with the reusable protective case to make it easy to drink the water.

The second packaging innovation is a recyclable 1-litre Vittel Hybrid bottle that is made from two types of material.

The first material is an ultra-thin plastic bottle made entirely from recycled content. It reportedly uses two times less plastic than a classic 1L bottle. The plastic layer is surrounded by a fibre-based material made from 100% recycled cardboard and old newspapers.

According to Nestlé, proprietary technologies enable the plastic and fibre-based layers to be locked together to create a functional, sturdy water bottle that can be used without any damage.

Nestlé’s packaging experts are currently developing a tearing system that they hope will allow consumers to easily separate the paper and plastic components for recycling when the hybrid bottle is empty.

These new innovations were developed by experts at Nestlé's research and development centre for Waters in Vittel, France who received special funding from Nestlé's internal R&D 'Shark-Tank' initiative. To develop the hybrid bottle, the experts worked in collaboration with Ecologic Powered by Jabil, a Californian start-up that specializes in eco-design of packaging.

Both the Vittel GO and Vittel Hybrid water bottles will be available for consumer testing in France in July. These two innovations are part of the company's efforts to reduce its use of virgin plastics by one-third by 2025.