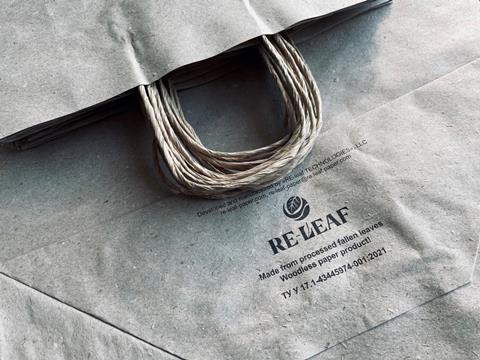 Re-Leaf’s patented technology extracts cellulose fibres from leaves collected from urban areas rather than forests, which forms the basis of its recyclable and decomposable paper products. The specific properties of leaf fibres also enable Re-Leaf to produce paper with a lower carbon footprint and water consumption than mainstream processes.

We spoke with Alexander Sobolenko, co-founder of Re-Leaf, about the development of the technology and its potential to influence the paper packaging value chain.

From school lab to commercial product

The Re-Leaf project started as an idea from Valentyn Frechka, CEO and co-founder of Re-Lead, who was a secondary school student and member of the Junior Academy of Sciences of Ukraine at the time. With “the opportunity to work in the school chemical laboratory, together with his teacher he created a project to obtain high-yield cellulose from fallen leaves as a material for paper production,” explains Sobolenko.

In 2017, “after four months of work” that involved a “series of experiments, attempts and failures to obtain cellulose that was suitable for paper production”, Frechka was able to present prototypes of the paper “on which you could write, draw, print, and which had a good physical and mechanical performance”.

Following the successful development of the paper prototypes, Frechka presented the project globally, in countries including the USA, South Korea, and Kenya, according to Sobolenko. As a result, Frechka was invited to “develop the idea from a simple study into a business project, the implementation of which would make it possible to produce the paper on a commercial basis”. 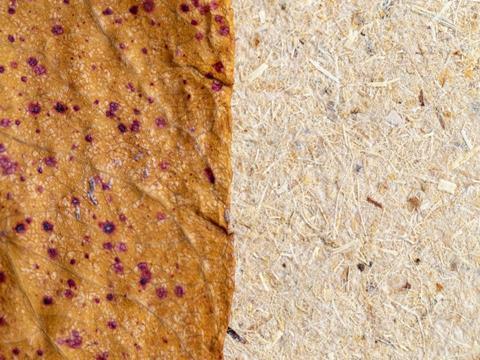 Alongside paper production, the group worked on testing the paper on packaging types, such as egg boxes. Sobolenko says that this gave them an “additional vision” of the material’s potential. The project obtained a patent for “the technology of recycling leaves with the subsequent production of paper” in 2019, and Research and Production Enterprise Re-Leaf Technology LLC was founded in 2021. Currently, the company has a production capability of up to 5,000 tonnes annually.

Re-Leaf paper is made through a four-step process. To begin with, fallen leaves are collected, and sent to the processing plant “from city parks, squares, [and] territories where it is necessary to carry out sanitary works”. The company does not collect from forests, which Sobolenko says is to “preserve the integrity of forest ecosystems”, where fallen leaves support biodiversity and the formation of topsoil.

Once the fallen leaves at taken to the processing plant, they are cleaned and “loaded into a special chemical reactor, in which, under the influence of physical and chemical processes, fibres are extracted from the raw materials”. This fibre forms the basis of the paper made later in the process.

During the third stage, the fibre is washed “several times to remove foreign structures that are not used for paper production”, then ground down for the next step. Sobolenko adds that “because we do not use sulphur-containing chemical components, the washing process is very simply and low cost.” Re-Leaf also does not use chlorine during the production process.

Finally, “the fibrous pulp is mixed with biological fillers.” At the processing plant, a machine “collects the pulp into a solid canvas and then dries it into rolls of paper”.

Re-Leaf’s main product is paper, which it can produce in a density range from 70 to 300 gsm. Sobolenko offers several applications for the paper, including the production of paper bags, cardboard, and corrugated products such as boards and boxes, both as liner and filler. Additionally, the paper could be used “as wrapping paper for products” or “as office paper for printing machines”, according to Sobolenko.

A holistic solution for paper production?

As for Re-Leaf’s environmental impact, Sobolenko envisions the technology as an alternative to cellulose derived from wood fibres, offering instead “circular cellulose production of paper/packaging”. The company has entered a declaration of partnership with Canopy, a consortium that aims to protect forests by working across the value chain to develop alternative solutions and technologies for sourcing, producing, packaging, and transporting goods in paper-based products. 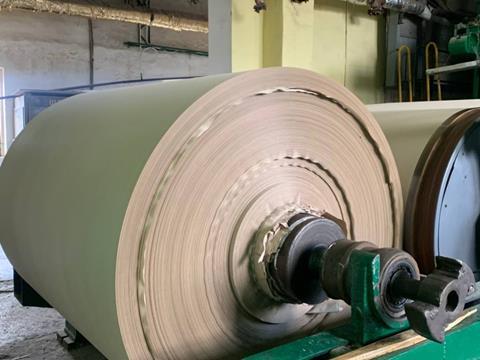 In addition, Sobolenko says that Re-Leaf’s technology “solves the problem of the utilisation of plant waste in the urban ecosystem”. Every tonne of paper produced by Re-Leaf reportedly corresponds with 17 trees not being cut down, as well as the utilisation of 2.3 tonnes of leaves.

By “closing the cycle of processing fallen leaves, the emission from our production can be reduced from 2,357 to 1,457 tonnes CO2 Eq/tonne of paper, which is 38.1% less than when using fossil fuels,” claims Sobolenko. However, Sobolenko notes that “this part of our project is currently under study and needs further elaboration to be implemented.”

Water consumption also appears to be reduced through Re-Leaf’s technology because, according to Sobolenko, “the simplicity of the composition of fallen leaves as raw materials allows you to exclude […] complex chemical components” like sulphur and chloride from the process. “Only 10-15 m3 of water will be used per 1 tonne of paper,” Sobolenko says, comparing to this to the 230 m3 of water apparently used for wood. Similarly, the fibrous structure of fallen leaves “reduces the effort of defibreing and grinding”, which in turn decreases the consumption of electricity and gas during the production process, again seeming to give lower results than when wood fibres are used.

Further along the value chain, Sobolenko adds that products made with Re-Leaf paper are “fully recyclable with a 30-day biodegradation period. Every bag or box made of fallen leaves can be used multiple times and then easily decomposed. It will fully decompose within 30-40 days in the ground.” 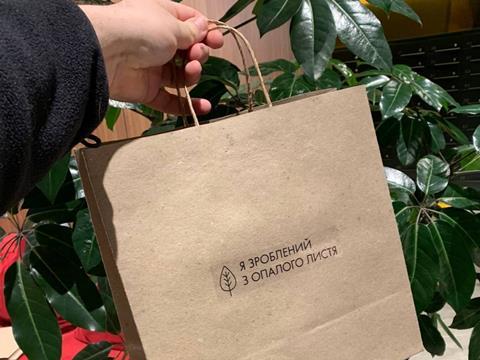 According to Sobolenko, this is an attractive feature for consumers: “Customers in retail stores would like to see less plastic packaging but more natural and biosafe [products]. We promote an idea that paper must be woodless and people keeping our product are proud to feel contribution in forest conservation.”

Re-Leaf is currently focused on scaling its production process and products. “We want to expand this idea all around the world,” Sobolenko says. “As a first step we are searching for partners and customers among global sustainable companies to join our solution and help us to get impact at the global market of packaging materials.”

The company is also looking to expand its operations by launching “Production and Sales offices in suitable EU-countries in order to simplify logistics and to be closer to our target audience. We are in touch with national agencies for investments from some Western and Northern European countries and we will select one or two jurisdictions with the most favorable conditions for our start-up.”

Sobolenko concludes: “At the end, our vision is that the technology of making paper from fallen leaves should be accessible at all continents. For this purpose, we will go not by franchise but by setting up joint venture enterprises with active partners all over the world. We’ve already started such negotiations with potential investors from France, Japan, USA, and Canada.”