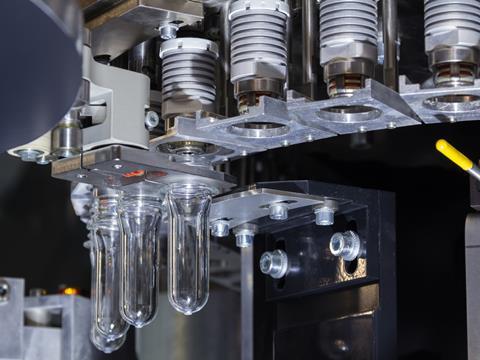 A recent intelligence brief compiled by research intelligence firm PreScouter profiles new technologies for recycling thermoset materials that can make an impact in reducing plastic waste. In this comment piece, PreScouter Project Architect in Chemicals, Materials & Packaging, Priscila Costa Carvalho, discusses the challenges of recycling thermosets and highlights how technological innovations are providing new opportunities through the production of valuable materials from plastics that have, until recently, been considered too difficult to recycle.

Generally, plastic materials are classified as thermoplastics and thermosets, according to their chemical composition. Major thermoset resin classes are isocyanates, unsaturated polyesters, formaldehydes, epoxies, and alkyds, which are widely used as strong, lightweight materials. From a technological point of view, thermoplastics are easily recycled and reprocessed by conventional thermal methods, while thermosets have long been considered thermally unprocessable as a result of the presence of covalent intermolecular cross-links.

Why aren’t thermoplastics being recycled?

When subjected to high temperatures, without any catalysts or specific conditions, thermosets burn and do not return to the original material as before being industrially processed. Although there is an environmental concern around the end of life of all plastics, the key drivers for industry are whether the process is financially viable and how a company can return the material to being a commercial product that will be accepted by consumers.

Currently, most thermoset polymers are landfilled or incinerated after their useful lifetimes, the least preferred waste management approach. The direct reuse of thermoset products will most likely remain a specific niche market.

As opposed to thermosets, thermoplastics can in theory be recycled using thermal methods, which are the conventional routes. The most widely produced thermoplastics are polypropylene (PP) and polyethylene terephthalate (PET), the latter being the most recycled post-consumer thermoplastic, as it is widely found in plastic bottles, which have a better network for collection and sorting.

The global volume of thermosets produced in 2020 was around 42 million tonnes, while the most recycled thermoset, polyurethane, had no more than 20% of its worldwide production of 10 million tonnes being recycled. 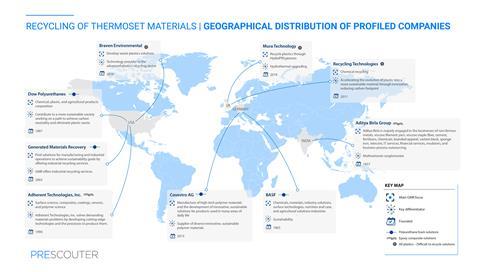 Thermoset recycling generally consists of breaking down the polymer into useful building blocks that can be reused in some other way, not necessarily the same product as it was before the recycling process. In technical terms, these are chemical catalyzed reactions (glycolysis and alcoholysis). The specific conditions of the recycling processes are usually not disclosed by the companies, but they can be understood based on their chemistries.

The most important classical thermosets that are recyclable are polyurethanes, epoxies, and silicones, since either valuable material can be recovered, or the output material can be used as building blocks in the manufacturing process of the original plastic material.

Polyurethanes are present in a very large volume in the low-density form in insulation foams of mattresses, furniture and packaging. According to Markets and Markets, the production of polyurethane foam in 2020 was 10 million tonnes and was projected to grow up to 17 million tonnes in 2030. There is inherent value in the materials resulting from polyurethane recycling, and there is a move by industry to recycle or reconstitute almost all polyurethane foam. The end product is typically sold to companies looking for carpet underlayment or pillow filling. The recycling process is well understood and takes about four or five hours.

Epoxies have inherently no value, but reinforced epoxies are recycled for carbon fiber recovery, which are 10 times more expensive than the epoxy itself. Markets and Markets reports that the production of epoxy thermoset composites in 2020 was 2 million tonnes and was projected to increase up to 4 million tonnes in 2030. Reinforced epoxies are recycled via alcoholysis, where there is typically a catalyzed degradation of the process. The chemistry is well understood, but there is room for researchers to better understand the catalyst.

Silicones are recycled because of the higher value of silicone monomers, which can be used in shampoo formulations as an antifoam agent, for instance. Silicones are recycled in a similar way to polyurethanes, but the molecules are broken down to polydimethylsiloxane (PDMS). The recycling process is mostly done on a small scale by silicone users.

Dow Polyurethanes is a segment of the Dow company focused solely on polyurethane solutions. Their technology, RENUVA Polyol, decomposes and converts polyurethane foam from end-of-life mattresses into polyols for use in new mattresses and other applications like insulation boards. The company claims that a 50% replacement of standard polyol in rigid foam and up to 30% replacement of standard polyol in flex foam is possible.

BASF has started pilot tests with their post-consumer polyurethane foam recycling solution ChemCycling. The process is a wet chemical recycling that converts the polyurethane foam into polyol, which they claim significantly lowers the carbon footprint for the production of new foam.

For epoxy composite recycling, the Aditya Birla Group, based in India, offers a technology platform called Recyclamine. It uses novel polyamine curing agents containing specifically engineered cleavage points at cross-linking sites, which convert thermosetting epoxies into recyclable thermoplastics under a certain set of conditions. The company claims that it maintains or exceeds the process and performance characteristics of the epoxy matrix used in the composites. The first industrial-scale implementation of Recyclamine was performed by Siemens Gamesa Renewable Energy to recycle wind turbine blades.

In addition to solutions such as these, several companies offer recycling technologies that are not targeted to one specific type of thermoset material but to ‘difficult to recycle’ materials. One example is Recycling Technologies, a recycling solution company based in England with expertise in the chemical recycling of plastic waste. RT7000 is a technology that transforms plastic waste into a chemical feedstock for plastic production called Plaxx.

In the United States, Braven Environmental provides a solution, Braven PyChem, that is able to convert difficult-to-recycle waste plastics into PyChem oil, which can be used either as a building block for new plastic production or as a substitute for traditional fuel products, thus generating second-life fuel.

From trash to treasure: New thermoset recycling technologies are opening up new opportunities

Although thermosets have long been considered difficult to recycle, at least 9 players acting worldwide, all profiled in PreScouter’s report, have demonstrated technologies that are able to recycle the most commonly used thermosets (polyurethane foams and epoxy composites) along with other ‘difficult to recycle’ plastics.

These technologies represent not only an advance in solutions that promote the circular economy, as the recycled product is reinserted into the supply chain, but also, they offer a business opportunity, as the raw materials are waste products that are of very low value while the obtained product is typically of a much higher value. There is an estimated potential of 80% of polyurethanes that are not currently recycled — this is without accounting for the other thermoset materials — and a move by industry to scale their solutions to a commercial level.