How can smart packaging improve a product before it even reaches the market? 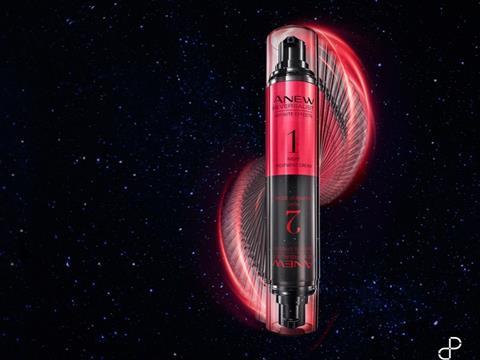 Cambridge Design Partnership’s (CDP) collaboration with the cosmetics company Avon on its ANEW Reversalist Infinite Effects Night Treatment Cream, which encourages consumers to turn it at weekly intervals to boost its efficacy, demonstrates the potential of smart packaging to enhance the research and development process. CDP fitted Avon’s packaging with its diialog sensors during a consumer trial to determine how the Night Cream was used, with the ultimate goal of de-risking the launch of a cosmetics product that required consumers to use it in a novel way.

We spoke with James Harmer, planning and innovation strategy lead at CDP, and Amy King, innovation consultant at CDP, about what the partnership with Avon tells us about early applications for smart packaging and how it can be used to demystify consumer behaviour.

The truth on trial

According to a survey by Avon, 78% of consumers believed that their skincare products stopped working over time. The cosmetic brand sought to address this with ANEW Reversalist Infinite Effects Night Treatment Cream, a product that utilises so-called rotational therapies – two different creams at either end of a tube-shaped pack, which the consumer switches between weekly to prevent the resistance of skin to antiaging properties. 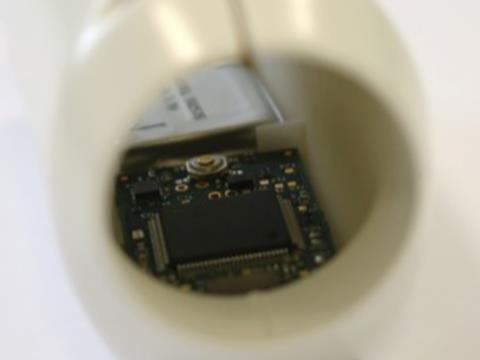 A diialog smart sensor inside a pack.

CDP’s brief from Avon was to “provide data about exactly how the product was being used, and to alleviate their concerns that the product might not be used correctly, in order to de-risk a multi-million dollar launch,” Harmer explains. The group’s smart packaging solution, diialog, which allows small sensors to be fitted discreetly within the packaging, formed the basis of the trial.

As King points out, the use of diialog aims to establish “truth data” that might not be readily available from ethnography, another method for gauging consumer behaviour that involves observations and surveys. When conducting ethnographic research, King notes that consumers might give the answer they think the researcher wants to hear – for example, indicating that they used the product exactly as advised – or may rely on memory to build a picture of usage, which is not always accurate. This is known as the Hawthorne Effect, where behaviour can unnaturally change when being studied.

Therefore, the purpose of incorporating diialog smart sensors into packaging is to fade into the background; with the consumer not feeling as closely observed or judged as they might during ethnography, they are more likely to relax into using the product as they would ‘in real life’.

“We’ve basically tried to make it as unobtrusive as possible because we don’t want to bias the consumers,” King says. “We give them the technology in the product, and we say, use this product as you usually would. The whole point of diialog is to act naturally and to get a source of truth.”

Notably, the diialog technology offers an opportunity to understand how products are used where ethnography might be considered too invasive. “For example, anything you use in the shower, it’s just a bit more sensitive than where, in normal ethnography, you might observe someone using detergent in a washing machine,” King says. The diialog sensors measure movement, so it essentially cannot see or hear the consumer. This means for products like shampoo – but also face creams, the focus of CDP’s research, which are often applied in consumers’ bedrooms or bathrooms – the use of smart packaging during initial trials can get environment-specific results without encroaching on privacy.

Of course, attitudes to sensors that covertly collect behavioural data are likely to be different within a controlled consumer trial than a larger scale public rollout. “There is all this paranoia about future technology, which we’re going to have to work through as smart packaging develops,” Harmer acknowledges. However, Avon and CDP’s consumer trial made it “clear we’re doing research”, with an explicit consideration of GDPR, which meant participants were more likely to accept and then ignore the presence of the diialog technology. As King says, in this case, “the fact that it’s smart packaging means nothing to the consumer, but it means a lot to us and our clients”.

Once the data has been collected, “we need to clean it, we need to put IDs on it,” King tells us. “We need to figure out what that data means, time stamp it. There’s a lot of data maintenance that goes into understanding it.” 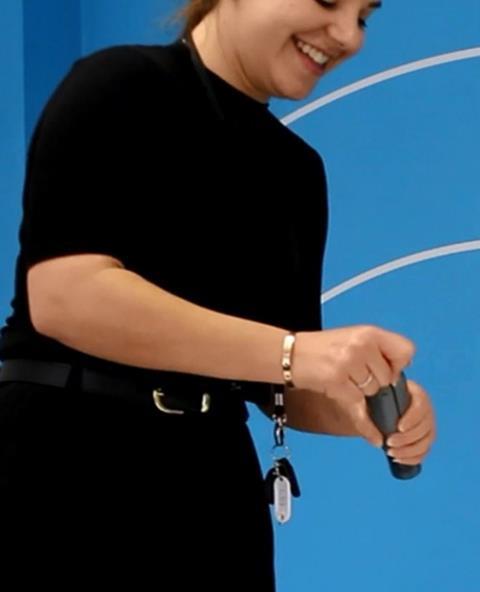 In its laboratory, CDP replicated some behaviour patterns with the smart packs to help to interpret data from the trials.

The time stamps gave CDP an idea of when the Avon cream was being used. The expected timeframe was in the morning or the evening, but consumer trials can produce “the odd case where it’s used differently”. Once the team mapped out time stamps, they could begin to understand how the product was used.

“We also have different sensors that will interact with each other to give us different data,” King says. This could be how long the product was used for or the intensity of the movement during its usage, which could indicate consumer behaviours such as shaking the product before dispensing it. “We have sensors in our pack that can tell us about how fast the product is moving and how quickly it’s being moved. We get a high data signal when it’s being treated in a heavy-handed way.”

The next challenge is interpreting the data. “We have a consumer insights team that will dig into all the data,” King adds. “Sometimes we have behaviours from the data that takes us a little while to figure out because we’re not sure what consumers are doing. This is where combining this technique with an interview or other traditional methods can help.

“We can recreate it in our own office to try and get the same data patterns. We can see if they’re shaking it really vigorously or if they leave it upside down, and that’s why we’re getting the reading. So it’s a bit of data manipulation and then a bit of our insights team figuring out the usage patterns.”

The why of this behaviour can then be established by triangulating different diialog sensors. For example, King uses the example of the heavy-handed treatment of the Avon packaging; the consumer insights team concluded that this was because people were in a rush when they were using it, based on the timestamps showing it appeared to be part of their morning routine.

“If Avon conducted this study themselves and if they got people to come in and use that product, or if we did it and we got people into our offices, they definitely wouldn’t have been that heavy handed,” King acknowledges. Even if they tried to recreate it with ethnographic studies, she argues, the participants “wouldn’t be as heavy handed because they’re aware they’ve got people watching them. So you do realise, actually, they are throwing this product around a bit more than we thought they would.”

For King and Harmer, this is what underlines the importance of using diialog for consumer trials: getting unexpected data suggests that a more realistic picture of consumer usage has been created, which gives companies something to work on that they might not have accounted for with more traditional methods.

Harmer suggests that “the problem with [smart packaging] is once the technology has been applied to a certain context, then people find it difficult creatively to get outside of that context.” Both Harmer and King believe that diialog enables early intervention by companies to get an accurate grasp of consumer behaviour before a product reaches the market. In this case, the added value of the diialog smart packaging is not what it offers directly to consumers, but rather how it helps companies to understand consumers better and, as a ripple effect, potentially improve consumer experience going forward.

Therefore, data from consumer trials that use smart packaging could help companies to anticipate consumer behaviour that might be detrimental to the product before it reaches the market, potentially saving on costs associated with correcting this down the line.

For CDP, this meant going back to Avon and helping it to prepare for the product launch using insights from the data. King explains that this meant asking, “if the majority of consumers are using it this way, how does that change the results for them? It might not achieve the best results, but what results does it achieve? Is there a big difference? Is there a small difference? What does that mean for our product? What does that mean for our consumers?”

The application of CDP’s data insights was ultimately for Avon to decide. King suggests that this might have looked like “slightly changing the way that your instructions are written” on the pack or communicating how different ways of using the product might produce different results. In the debrief, Harmer notes that CDP also recommended that Avon could use an automated text or email as a prompt on the day the consumer needed to turn the product to reactive the antiaging properties or reorder the pack towards the end of its lifecycle. 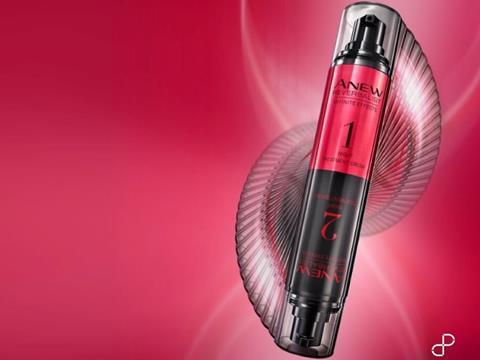 Ultimately, the goal of CDP’s smart packaging trial was to de-risk Avon’s product. This meant weighing up whether unexpected consumer behaviours were “worth the additional investment” of altering the pack before its commercial launch. The main question, according to Harmer, is: “are we confident that we launch now and we’ve got a strong product?”

For Avon, the answer to this was affirmative, with the trial reinforcing confidence in the packaging and the way consumers were likely to interact with it. The company has since launched the ANEW Reversalist Infinite Effects Night Treatment Cream.

For CDP, this points to the future potential of research techniques and smart packaging after a product reaches consumers. The costs of smart packaging interventions vary, but Harmer implies a commercial solution that installs sensors in a reusable pack, for example, could allow for the personalisation of aspects like usage prompts.

“Let’s say the pack is able to communicate back to me, with a more cost-effective instrumentation,” Harmer says. “You can imagine, in the future, a lot of brand engagement via smart packaging. You could actually coach, educate, and help consumers, not just about buying the product or marketing the product, but about building trust and two-way relationships with consumers.”

In addition, “we also need to think about sustainability. Launching a product that’s not any good and ultimately gets scraped or delisted, there’s a huge amount of carbon impact by putting something out on the market that actually doesn’t work.” According to Harmer, “there are opportunities for smart packaging to do a huge amount more in sustainability” through upstream applications like consumer trials, where companies can de-risk a product, as well as during use to influence consumer behaviour and downstream to help collection or sorting systems.

For Harmer, it’s important when looking to the future of smart packaging to avoid “tech for tech’s sake”, instead suggesting that the focus should be on applications where it can make a tangible difference either behind the scenes, as was the case for Avon, or for the consumer: “We’re tech agnostic, we have no incentive to force technologies onto our clients”. CDP has spent 4 years developing the Smart Packaging Playbook, which is aimed at giving clients a fast-track tool to determine “why and how they could use smart packaging in a really simple way”. The playbook is intended to be used by companies to understand whether smart packaging fits with their products and categories, avoiding the shoehorning of technology where it might not be needed.

CDP will also be discussing the future of smart packaging at Empack in Birmingham in May 2022 and at Paris Packaging Week in June 2022.