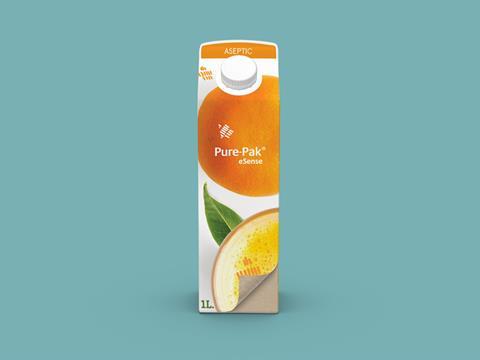 Elopak is today announcing Pure-Pak eSense, an aseptic carton with the aluminium layer removed – a decision that reportedly results in a reduction of the solution’s carbon footprint by 28%.

The new solution is the same shape as the existing Pure-Pak Sense Aseptic carton. It has been developed using technology from Elopak’s portfolio which reportedly means that the carton can preserve product integrity, safety, and lifespan without requiring the aluminium layer which is commonly used in aseptic packaging.

According to the company, the elimination of the aluminium layer results in a reduction of the carbon footprint of the carton by 28%, while facilitating full recyclability.

Elopak’s director of sustainability, Marianne Groven stated: “Elopak is on a journey to become even more sustainable, both as a company and through the cartons we produce. Over time we have continuously improved the environmental profile of our cartons. For example, between 2014 and 2020 we achieved a reduction in the carbon footprint of an average carton with a closure from 32 gCO2e to 25 gCO2e.”

“Life Cycle Assessments have demonstrated that beverage cartons already have strong environmental credentials when compared to alternatives such as plastic bottles. They also play an important role in keeping products safe and minimizing food waste, which is a major source of greenhouse gas emissions.

“The addition of the Pure-Pak eSense carton to our offering is important because it means our customers in the aseptic segment will also be able to select an aluminum-free option,” she continues.

“Aluminium is a finite natural resource, meaning it does not replenish over time. In addition, the extraction and production of aluminium is relatively energy-intensive and thus has a higher carbon footprint compared to the other materials in beverage cartons,” Groven claims.