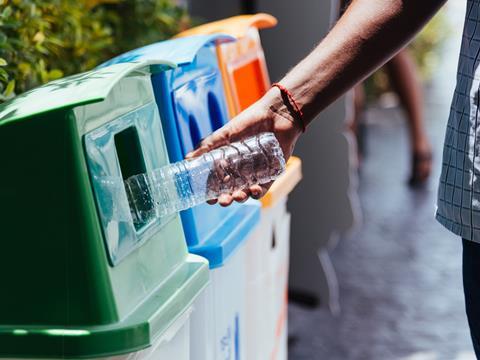 The Indian government recently passed a law that will force producers, importers and brand owners to recycle up to 50% of the plastic they use or produce over the next three years. Christian Schiller, co-founder and CEO of cirplus, argues that Europe should follow suit.

In 2014, Nobel Peace Prize laureate Kailash Satarthi described India as the land of 100 problems, but the mother of one billion solutions. Standing on Juhu beach against a backdrop of Mumbai skyline I’m reminded of those words as I behold the huge swathes of plastic waste brought upon its shores with each passing stroke of the tide.

With the use of plastic only growing, it seems inevitable that the precious natural spaces surrounding India’s most densely populated city would fall foul to our addiction to the material. The beach, for all its inherent beauty, resembles more of a garbage dump than a tourist destination. Plastic bags, bottles, sweet wrappers, lids, tubs, and many more items make up the tsunami of pollution that is assaulting Mumbai’s coast.

But as unsightly as the rubbish is, India is showing the ambition needed to meet the crisis head-on. Rather than resign its natural spaces to languish beneath copious amounts of plastic waste for centuries to come, India is cleaning up its mess through legislation.

Earlier this year, the country passed a law that will make it mandatory for producers, importers, and brand-owners – those who are most responsible for the plastic crisis – to recycle up to 50 percent of the plastic they produce over the next three years. Having come into effect on 1st July, this monumental new law hasn’t come at a moment too soon, and goes further than any other country.

Crucially, the measure resists the urge to just combat well-known and easily-recycled PET, but all plastic types and materials. Likewise, under the regulations on Extended Producer Responsibility for Plastic Packaging, there is the obligation in India to use recycled content in flexible, rigid and multi-layered packaging.

This is more than any other country in the world has implemented so far. Specifically, each material under this will law will have its own mandatory usage of recycled content set. For example, Category I (rigid plastic) has the mandatory target of 30% of recycled content in the material by 2025, with 10% increases until 2028.

By raising this bar for recycling, India can inspire a shift in the fight against plastic pollution and its actions could act as a roadmap for other global leaders to follow.

India has acknowledged it has a plastic waste problem, but it is making the right noises and attempting to rise to the challenges it brings. Meanwhile, Europe is seriously lagging behind.

While we may be effective at collection on the continent, our recycling rates of plastic leave much to be desired, with some reports as low as 9%, as a lack of urgency compounds the situation.

Too often policy is only ever implemented as a kneejerk reaction to the calls of special interest groups, rather than as part of an overarching strategy, and often the legislation lacks the stringent measures to combat the crisis. For example, while we quibble over the charges for plastic bags of a few cents and pence in Europe, single-use plastic bags will be completely banned across India from July onwards.

The current trend in action to combat plastic shows developing countries are well ahead with plenty of stand-out examples to look to for inspiration. The government of Bangladesh was the first to introduce a total ban on lightweight plastic bags in 2002, years ahead of Europe.

Kenya, one of 30 African countries to implement anti-plastic bag policies, introduced the world’s harshest plastic bag ban in 2017, banning bags outright, with those found to be using, producing, or selling plastic bags facing up to four years in jail or a £31,000 fine. By taking a hard-line approach, these countries are showing that one of the effective solutions to the plastic crisis is through robust legislation.

Here in Europe, we can learn from India. With industry failing to quicken the pace of change, we need our governments to force their hand to do so with the kinds of measures we are seeing in places such as India and Kenya. We need legislation that will utilise Europe’s collection rates, diminish virgin plastic production, and boost recycling efficiency to the point where the use of plastic changes from single-use to a circular item. We need our leaders to say enough is enough on plastic pollution.

Standing on Juhu beach surrounded by plastic rubbish, the one solace is India has a grander plan to tackle the issue. Currently in Europe however, there is a glaring omission on if, and how, we will solve the plastic crisis.