The Ambitious Realism of kp’s Pledge 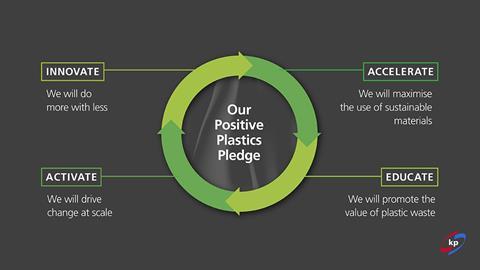 There are some applications where practically recyclable alternatives are even further over the horizon, such as some multi-layer lidding for protein trays and PVC film for pharmaceutical blister packs. In both cases, kp are unaware of simple alternatives, and sceptical that regulators or the general public would tolerate compromises in safety or hygiene as the trade-off for recyclability. “The public might tolerate mountains of food waste but not one child contracting salmonella poisoning,” commented Mr Dayan. “We’re looking into easily recyclable alternatives but realistically, we have to say that nothing is going to change quickly because these alternatives do not exist yet.”

Meanwhile, another specific focus is on alternatives to expanded polystyrene. “EPS is a fantastic thermal insulator and very light,” observed Mr Dayan. “Paradoxically, however, it’s so light – 93 per cent air – that it’s not economically viable to recycle. Currently we are in discussion with the supply chain and recyclers and looking at alternative solutions. The way forward should become clear in the next 24 months.”

Whatever progress an individual packaging business makes in circularity is inevitably constrained by external links in the chain: appropriate disposal and collection of plastic waste, and the existence of recycling infrastructure. kp believes that regulatory and governmental intervention will be crucial in completing the circle, both in shaping the market and priming the pump.

“At the moment it’s cheaper to export waste and to import high-quality recyclate,” said Mr Dayan. “Sometimes we hear that ocean plastic isn’t a European problem because most of the waste enters the sea from the major rivers of the developing world. Let’s not forget that we in the West still export a significant amount of waste to countries such as Indonesia, Vietnam and the Philippines where there is limited waste disposal infrastructure, even after China ceased to accept it. If we analysed the proportion of waste floating down Asian rivers that originated in western Europe, the findings might be very uncomfortable. The Chinese ban is actually a fantastic opportunity for Europe to invest in domestic recycling.”

He proposes emulating the way in which renewable energy has been transformed by subsidies over the last 25 years: as the scale grew, so the need for subsidy reduced, and the end result is that today’s wind turbines and solar panels are a fraction of their previous cost.

Joining up strategies across Europe would also make a big difference, though our fragmented and contested systems represent a formidable challenge for harmonisation. “There are lots of strategic questions which have to be handled carefully,” Mr Dayan stated. “For instance, in principle we support deposit return schemes – why pollute a high-grade polymer if it can be kept separate? But this raises the question of the impact of taking a high-value stream out of kerbside recycling. And how does the rise of e-commerce affect a system that relies on reverse vending machines in supermarkets? Meanwhile, across Europe different countries have different approaches and corresponding facilities. To name just three, the Netherlands has good collection rates and little landfill but relies heavily on incineration; Germany has long-established DRS delivering excellent returns of bottles but poorer collection and recycling of trays; and in the UK there is less incineration capacity, which has led to better recycling of pots, tubs and trays but relatively low overall recycling rates. These things are driven by regulators, and politicians need to take more of a holistic view.”

Of course, the most influential regulatory push has originated in Brussels, in the form of the EU Plastics Strategy. kp welcomes the general principles in terms of the key objective of driving up recycling rates. However, Mr Dayan diagnoses signs of that familiar regulatory failure to connect the dots, as reflected in the fact that the plastic waste plan was developed in isolation from the EU’s food waste strategy.

“The devil is in the detail and there’s still a lot of opacity around definitions that will be pivotal in turning broad strategy into law,” he said. “For example, it’s still not clear to us whether a meat tray is defined as a single-use plastic. Banning such an item would be highly problematic causing food waste to rocket. Another glaring omission is that it’s not yet clear whether taxes on plastics will apply to virgin materials only or also, counter-productively, to recyclate.”

Meanwhile, when kp and other packaging manufacturers use recycled content in food-grade applications they are dependent on approval from the European Food Standards Agency – but EFSA over the course of around a decade has failed to issue definitive guidelines. As a result, any investment in PCR food packaging has been on the basis of temporary letters of approval. If the EU wishes to transform the investment climate, it would do well to put pressure on regulatory organisations to bring clarity to standards.

And so – the Pledge. In the context of the feverish debate around packaging and sustainability and the desperate need for collective action driven by wide and long-term perspectives, kp has made a public statement of its stance. At a time when some organisations have rushed to make eye-catching but superficial commitments, this is refreshingly grounded in its commitments.

“Along with the rest of the industry, we have a role to play in educating and communicating about the challenges we face,” commented Mr Dayan. “This is an area where we fell behind in the past, perhaps put off by the risks of sticking our head above the parapet. What we’ve said and what we’ve promised in the Positive Plastics Pledge is entirely consistent with the strategy we have been pursuing for years but we’ve tried to articulate it much more simply and clearly for employees, customers and consumers.”

The document contains four pillars. The first, ‘Innovate’ outlines the commitment to putting its R&D resources into downgauging and maximising use of recycled content. ‘Accelerate’ sets out kp’s pledge to only use materials that are practically recyclable or sustainably sourced by 2028, as well as to simplify polymers to ease recycling. ‘Educate’ (a pillar manifested by the Pledge itself) promises to promote the benefits of circularity in plastics and engage with society around responsible disposal. Finally, in ‘Activate’ kp pledges to lead discussions and initiatives to make collection and recycling infrastructure fit for purpose.

“It can be hard to get the holistic argument across to consumers,” Mr Dayan concluded. “Cucumber packaging is a classic example of plastic film making an overwhelmingly positive impact on the environment, but as a proposition it seems counter-intuitive to the public. The Positive Plastics Pledge is an attempt to contribute to this, setting out the environmental and scientific logic behind our business decisions. We see this as a starting point for hopefully a fruitful dialogue with industry, consumers, regulators and environmental organisations.”