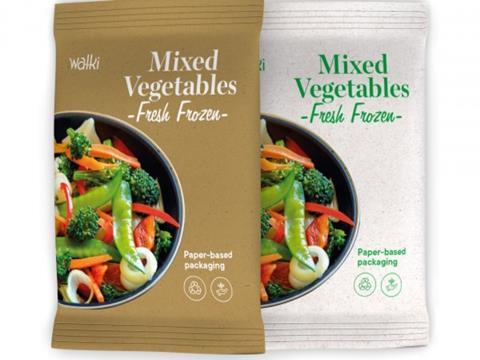 Walki has developed a portfolio of paper-based packaging, including printed solutions, for frozen food applications, which are intended to be recyclable in existing paper streams.

The portfolio includes the Walki EVO Seal and Walki Opti Seal, which, according to the company, are paper-based packaging especially intended for pillow-pouches for frozen food, such as vegetables, seafood, and bakery products. Walki says that the EVO Seal has a dispersion coating barrier against water vapour and grease, while Walki Opti Seal apparently features an optimised PE-extrusion coating.

Walki claims that both the EVO Seal and Opti Seal solutions are recyclable.

Andreas Rothschink, head of product development at Walki, explains: “The dispersion coating makes Walki EVO Seal recyclable in the waste-paper stream without any separation process, while the minimised PE-coating on Walki Opti Seal makes it suitable to be recycled with paper with an acceptable fibre yield.”

In addition, Walki says its Lamibel MDO-PE is a film-based material for pillow pouches made of reverse printed MDO-film and solvent-free laminated with low sealing LDPE. According to Walki, the MDO technology means that film thickness is minimised while performance is maximised by replacing gother sorts of materials such as PP- or PET-films.

The company adds that the Lamibel MDO-PE is suitable for all types of packaging, including doypack, flowpack, and pouches. It can offer a packaging solution for frozen foods including vegetables, sharp-edges seafood, and bakery products.

Rothschink comments: “This combination of two PE-films makes the packaging fully recyclable in the plastics stream. The stretched film has better optics with high stiffness and mechanical properties than standard PE. The film can also be transparent, allowing the consumer to see the product.”

Walki Pack Tray, the final addition to the portfolio, is a board-based tray that is apparently suitable for ready-made meals and is designed to replace aluminium, plastic, or plastic-coated trays. Walki claims that the tray material is 100% PET free and recyclable in the paper stream.

Dudley Jones, consumer sales at Walki, adds: “The tray is easy to fill, transport and store, and is also the convenient choice for the consumer as the fibre-based tray is safe to use in microwaves and in conventional ovens up to 220 degrees for up to 60 minutes.”

Walki cites data that suggests the global market for frozen food is expected to grow to €322 billion by 2026. According to Jones: “Frozen food is an ideal way to prolong shelf life without losing out on the vitamins. It is also an excellent way to combat food waste. This is important as up to 9 % of global carbon emissions can be attributed to food waste, especially fruit and vegetables.”

Last year, Walki launched a portfolio of trays for ready-made meals and frozen food that is reportedly fully recyclable in paper streams.