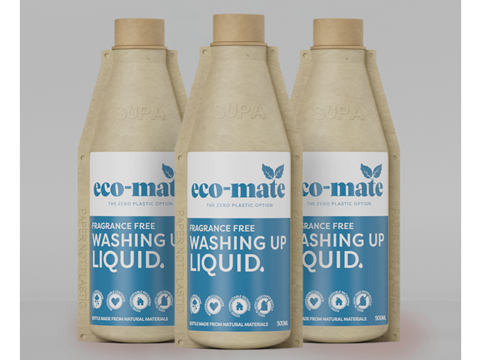 SUPA claims to have produced the world’s first plastic-free paper bottle for laundry and washing up liquids under its eco-mate brand in an effort to reduce the consumption of single-use plastic.

The bottle was apparently designed in response to paper bottles already available on the market, many of which still feature inner layers, necks, and lids made of plastic. Its internal coating is made of seaweed and natural plant latex to protect the paper from liquid damage; these materials are reportedly biodegradable, and the process is thought to be facilitated by biodegradable accelerators incorporated into the bottle itself.

Such design features are intended to make the bottle disposable through several means at end-of-life, including being cut up for home composting, recycled in existing waste streams, or thrown away in the garden waste bin.

SUPA claims that the bottle does not decompose into microplastics and has been tested and certified as a 100% bio-based material. It now intends to use the same materials to package other products, from pet shampoos to multi-surface cleaners – all of which are also said to be plant-based.

“The environment doesn’t care if a product uses recycled plastic or not,” says SUPA co-founder Scott Nicholas. “It behaves exactly the same when it finds its way into our oceans, and with 33% of all single-use plastic waste finding its way into our ecosystems every year, paper and biomaterials that compost naturally are a no brainer choice.”

The news comes after Procter & Gamble Fabric and Home Care announced a collaborative trial with Paboco to package its Lenor liquid fabric conditioner brand in ‘first-generation’ paper-based bottles in the Netherlands. Its inner layer its still made of plastic at present.

Jerry Porter, senior vice president of R&D for Global Fabric & Home Care Sector at Procter & Gamble, subsequently clarified that this design is ‘not a final product but a great first milestone in our paper-bottle journey’, and that an independent LCA regarding the bottle is still being critically reviewed. However, he also claimed that the Paboco Gen1 bottle used in the trial contains 30% less plastic than the previous Lenor Fabric Conditioner bottle design.