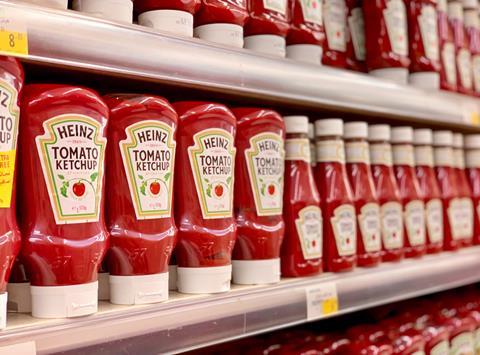 Kraft Heinz has agreed to set a goal to reduce its total virgin plastic use, following the filing of a shareholder proposal and engagement with As You Sow, a shareholder advocacy nonprofit.

The proposal asked Kraft Heinz to report on how the company would reduce plastic packaging, including planned reduction strategies or goals, materials redesign, substitution, or reductions in use of virgin plastic.

The company now reportedly intends to set a “substantial” virgin plastic packaging reduction goal later this year or in the first quarter of 2023, the company informed As You Sow in a statement. In response, As You Sow agreed to withdraw its shareholder proposal.

Kraft Heinz said it would “continue to drive towards its packaging goals and support of a circular economy through a variety of initiatives and investments, including reduction of virgin plastic material, packaging redesign, increased use of recycled content, and continued exploration and scaling of reuse models.”

“We were pleased to reach this agreement with Kraft Heinz that involves a substantial virgin plastic reduction goal for packaging including consideration of packaging redesign and innovative reuse models,” said Conrad MacKerron, senior vice president at As You Sow. “We have similar pending proposals at Amazon, McDonald’s, and Kroger and hope that those companies can agree to reductions in the use of plastic for packaging.”

45% of Kroger shareholders and 35% of Amazon shareholders supported proposals last year asking for reductions in plastic use.

Five other large companies — Keurig Dr Pepper, Mondelez International, PepsiCo, Target Corp., and Walmart — agreed to virgin plastic reductions in 2021 after the filing of shareholder proposals by As You Sow.

Target and Keurig Dr. Pepper agreed to reduce virgin plastic in brand packaging by 20%, Walmart agreed to a 15% cut; and Mondelez agreed to cut 5% — all by 2025; and PepsiCo agreed to a 20% cut by 2030. Cumulatively, the reduction in use of virgin plastic announced by these five brands is apparently expected to total more than 700,000 tons.

The largest cut in overall plastic use to date by a major consumer goods company was a 2019 commitment by Unilever to cut virgin plastic use by 50%, including a total elimination of 100,000 tons of plastic packaging by 2025.