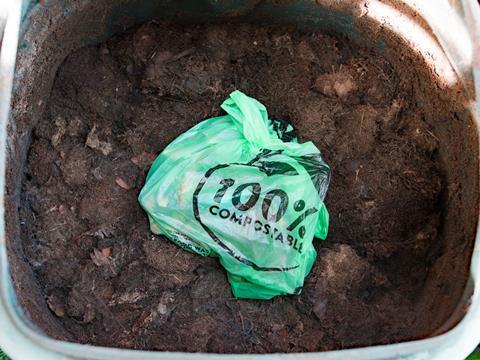 Notably, this research focuses solely on home compostable waste. Plastics can also undergo industrial composting, which is a controlled biotechnological process to convert biodegradable organic waste into compost. This process is already used in the agricultural sector to improve soil quality. Some facilities undertake aerobic composting, in which microorganisms consume oxygen while breaking down organic waste to produce CO2, water, compost, and heat; others use anaerobic digestion, wherein bacteria degrade the organic waste in an environment devoid of oxygen to produce biogas and digestate. The latter process, in particular, tends to remove compostable plastics from its waste stream. 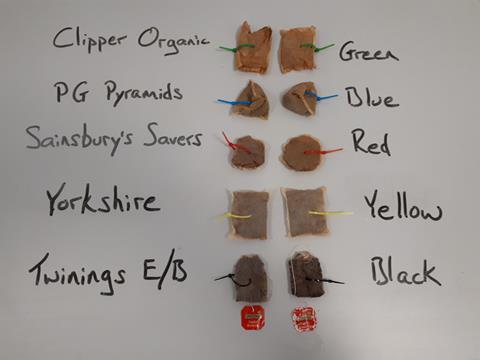 An example of a twelve-month experiment sent to the Big Compost Experiment from an outdoor closed-bin composter in south-west England.

By contrast, home composting involves the collection of biodegradable garden waste or domestic food waste, which is then placed in a container or heap to naturally degrade into compost. This usually occurs under aerobic conditions, but anaerobic composting is also possible. The typical time frame for this process is reportedly 3-12 months, with various geographical features such as temperature, water content, chemical composition, and pH affecting the way decomposition occurs.

In the UK, home composting is not officially considered to be a recycling process. This is because organic waste that undergoes industrial composting can obtain legal ‘end-of-waste’ status in accordance with specific conditions, whereas home composting is unregulated. However, it is encouraged by the Waste Framework Directive to reduce pressure on industrial composition plants. Similarly, it states that compostable packaging that complies with relevant European standards or equivalent national standards can be collected separately and processed with bio-waste.

The study states that the Directive and the UK Government’s Environment Bill aim to provide more closed-loop organic waste processing systems in the future, which apparently reassures some manufacturers that, even if their compostable packaging cannot be collected and sorted at present, future developments will ensure that their packaging is sustainable. In other cases, companies are thought to ignore the lack of existing infrastructure to ensure that consumer demand for sustainable packaging is met.

If compostable plastics are to avoid contributing to plastic waste, says UCL, they must match composting maturation timeframes and cycles of compost. It is pointed out that using the term ‘biodegradable’ to describe plastics does not specify how long a plastic will take to biodegrade, or under what conditions; ‘compostable’, on the other hand, is comparatively specific and implies that a material can undergo biological degradation at a similar rate to known compostable materials without leaving visual or toxic residues behind. Naturally, this is a longer period for home composting than industrial. 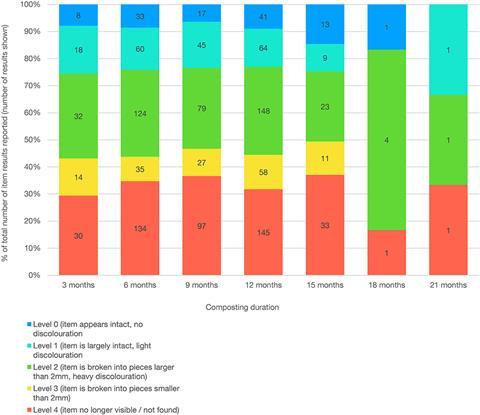 Despite this, the length of composting time is not said to have drastically affected the results of the study. Predictably, though, longer experiments saw a higher percentage of decomposition. While 71% of experiments over a three-month period reported that visible packaging remained, the figure reduces to 63% over fifteen months. Nevertheless, the health and dynamics of each individual composter are also suggested to have affected the rate at which the packaging was composted.

Of the 902 home compost experiments completed at the time of data collection, 55% of the results reported that the items were still clearly visible within home composting timeframes; 11% contained visible pieces that were smaller than 2mm, and in 34% of cases, nothing visible remained. For outdoor closed-bin composters, 59% remained visible, 11% contained small but visible pieces, and 30% were no longer visible. Similar results are said to have occurred across the ‘outdoor open-slatted’, ‘multi-stage’, and ‘hot-bin’ categories. 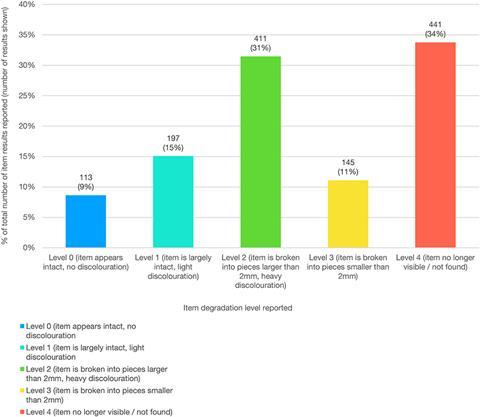 The smaller-than-2mm pieces found in compost are technically microplastics, according to the report, and although they should fully decompose in time, 61% of the packaging tested still failed to meet the expectations of a certified home-compostable plastic. Indeed, most of the samples are not thought to have fully disintegrated when tested, including the 60% that were certified as ‘home compostable’.

While 64% of participants conducted their experiments in an outdoor closed-bin composter, other options such as outdoor trenches and indoor wormeries were reported. 42% of the sample group responded to the attitudes survey that they would prefer to compost at home, whereas 16% answered that they would prefer to use council waste collection and 4% preferred a different waste strategy. 83% of participants claimed to use their compost to enrich their soil and grow edible plants, fruits, and vegetables, suggesting that the substances being put into home compost influence small-scale, home-grown food chains.

Furthermore, fourteen categories of microorganisms can apparently be seen by the naked eye in home composters, including worms, mites, and fungi – meaning that inappropriate materials ending up in compost can affect biodiversity. The diversity of compostable plastics sold on the market is also thought to pose a significant challenge, as it can result in a ‘complex mix and volume of polymers’ ending up in compost.

Yet the researchers argue that consumers cannot successfully identify compostable packaging based on its labelling. Images sent to the Big Compost Experiment website indicated that some participants were placing industrially recyclable or biodegradable packaging into their compost, and 46% of the packaging identified in the study did not have any compostable verification.

As such, the certification marks on the packaging were also examined. 47% displayed the TUV OK Compost Home symbol, 26% the European Bioplastics Seedling logo, and 2% the TUV OK Compost Industrial. A lack of understanding of the symbols and terminology is one suggested reason as to why consumers might refrain from buying compostable packaging, leading to the assertion that labels must be more explicit about how and why to compost materials. 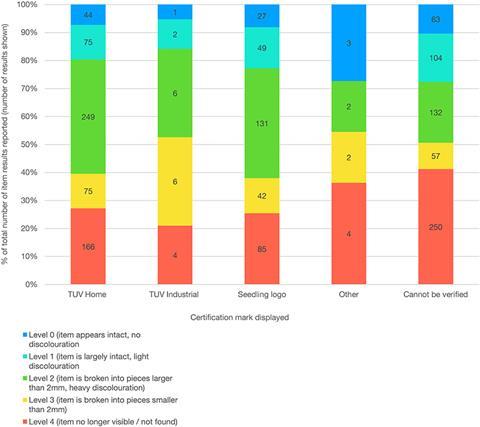 Despite the confusion, 85% of participants in the attitudes survey responded that they wanted to buy compostable packaging, even if they struggled to identify it in practice. The study claims that eco-consciousness amongst consumers and access to composting or compostable materials were driving factors behind this. However, other reasons for hesitation are thought to include a lack of access to composting materials; scepticism around its sustainability or general negative beliefs surrounding environmentalism; and preferring other types of packaging, or not taking notice of the packaging at all.

Even so, compostable packaging is theoretically beneficial when applied to products viewed as contaminants in recycling streams, which includes food, wipes, tea bags, and sachets. It also finds frequent use in the form of protective transportation films, liners, bags, cups, plates and cutlery, biowaste bags, and agricultural films and mulches. The success of such packaging is reliant on the ability to identify it as compostable, have the resources available to compost it, and carry out the composting process successfully.

Although little data was recorded for Northern Ireland, it is claimed that an overall improvement in composting effectiveness came from Wales, while England and Scotland saw similar outcomes to each other. Still, due to the result that 91% of participants claimed to separate their food waste, a figure that is higher than the national average, it is assumed that the participants in this study are not representative of the entire UK population. Furthermore, 85% of them answered that they were more likely to purchase a product if its packaging claimed to be biodegradable or compostable, suggesting further bias towards sustainable practices within the sample in comparison to the 34% national average.

Where results were gathered, newspaper and magazine wraps were the least-composted item of packaging, with 58% still clearly visible and only 30% invisible. Caddy and bin bags, shopping bags, and fruit and vegetable films are said to have garnered similar results. 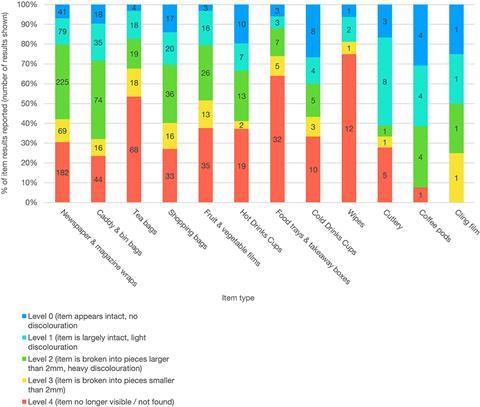 In conclusion, UCL asserts that materials cannot be sustainable in and of themselves, and that production, collection, and reprocessing systems are the key to true sustainability. Compostable plastics must also mind the type and amount of energy and water they use, as well as the by-products they create.

Even though their bio-products are thought to contribute to compostable plastics’ renewability, a lack of collection systems reportedly impacts their claim to sustainability. Disposing of them through food waste streams tends to increase the cost of current anaerobic digester systems, as they are treated as contaminants and removed to be sent to landfill or an incinerator. 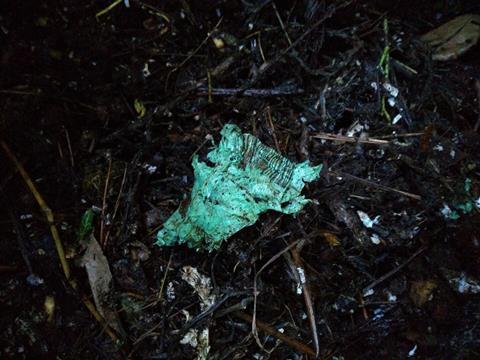 An example of a twelve-month experiment sent to the Big Compost Experiment from an outdoor closed-bin composter in Scotland.

Industrial organic waste management processes are said to regulate the processing of compostable and biodegradable plastics, but such systems have not been widely implemented in the UK, the report suggests. Most anaerobic digestion and recycling systems are not yet compatible with compostable and biodegradable plastics, meaning that they mostly end up in landfill and incineration – an eventuality that is apparently not communicated effectively to consumers, leading to misleading claims about the packaging’s sustainability.

Other studies are said to have simulated compost, soil, and sea environments and proven that compostable plastics still persist in those conditions, although UCL states that further field studies are required to prove this. In its view, the intricacies and variables of real-life conditions, and the range of abilities in real humans tending to compost outside of laboratories, cannot be artificially replicated.

Currently, the bioplastics market share is as small as 1% of the 335 million tons produced around the world, although the 0.91 million tons produced in 2018 is expected to rise to 1.3 million tons in 2023. That figure could continue to rise if products such as snack packets and chocolate wrappers were to be packaged in compostable plastics.

In response to the study, Bio-based and Biodegradable Industries Association chairman Andy Sweetman said, “The results of this welcome research show that compostable packaging actually does biodegrade but that there is huge variability when the process is handled through home composting, and confusion over which materials are suitable. Many home composters are actually trying to compost plastics which are not at all compostable. We need to end the use of terms like degradable and biodegradable to avoid consumer confusion.

“In order to treat food and garden waste most effectively on a large scale, we need household collection systems and industrial composting. Consumers should be encouraged to place certified compostable packaging into their food waste bins as in many countries around the world.

“Home composting is a part of the picture and we encourage this practice. Large-scale composting is achieved through an industrial process, involving both a composting phase and anaerobic digestion to produce soil-improvers and biogas, and gives all householders a route to recycling food and garden waste along with certified compostables.”

Meanwhile, European Bioplastics (EUBP) criticised a study conducted at the University of Plymouth for reinforcing existing knowledge surrounding oxo-biodegradable bags – or bags made of materials that degrade faster when oxidated – which had already been researched and banned as part of the Single Use Plastic Directive.

On the subject of compostable plastics, though, François de Bie, chairman at EUBP, argued that “the study confirms that only certified biodegradable and compostable bags – designed to be collected with the bio-waste and organically recycled in dedicated composting plants – even if mistakenly littered in the environment due to bad habits, have a reduced environmental impact.

“While no plastic bag should end up in the environment, period, at least it is clear that certified compostable ones will not need decades to degrade, as conventional plastic bags do.”