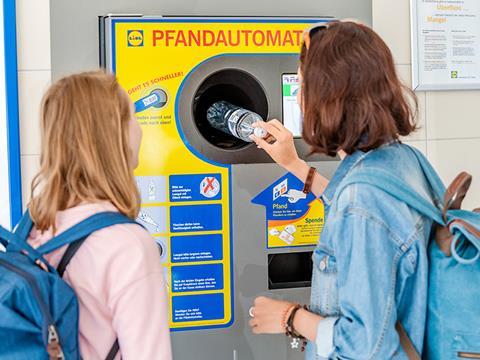 New research from Suntory Beverage & Food, the maker of Lucozade and Ribena, suggests it takes just seven weeks for the vast majority (88%) of shoppers to rethink their relationship with plastic bottles and to appreciate their value after living with deposit return schemes.

As part of the study, titled ‘Deposit Return Schemes: What’s in Store?’, SBF undertook four distinct behavioural studies involving almost 8,000 people across the UK. The research included placing over 5,500 people in a virtual reality shopping environment to see how they would react when a theoretical deposit return scheme was introduced. Further studies with another group were focused on understanding how consumers lived with deposit return schemes over an 8-week period.

The company claims to have discovered that shoppers experience a three-stage mental shift when required to pay a deposit, which the company has categorised as ‘Surprise, Review and Reset.’

At first, shoppers apparently experience surprise at being asked to pay more for soft drinks in a retail environment and return items for a fee, which is currently set at 20p per item in Scotland (with other devolved nations expected to introduce a similar level of fee).

In the second stage, SBF says that consumers review their relationship with materials like plastic bottles and learn how to adjust to the new scheme rules after having to re-evaluate the value of their drinks packaging.

In the final phase, shoppers reportedly reset and change their behaviour towards materials like plastic bottles resulting in new routines and different choices.

Discussing the new research, Matthew Deane, head of customer marketing at SBF Great Britain and Ireland, said: “Deposit return schemes will bring about one of the biggest changes in shopper behaviour in a generation. Many people purchase on autopilot and will be surprised that they will have to pay more upfront and then retain the items in good condition to get their deposit back. Lots of retailers selling any bottle or can in the schemes will have to offer a collection service.

“This will positively transform the shopper relationship with plastic and cans. However, it’s important retailers understand this shift, so they are in the best place to adapt to these forthcoming changes. We’re on hand to help them on this journey.”

Deposit return schemes are set to be introduced throughout the UK at various points over the next couple of years. Scotland is due to introduce a DRS in August 2023, and details of schemes being rolled out in England, Wales and Northern Ireland are expected to be published later this year. SBF GB&I is a founding member of Circularity Scotland, the body set up to administer deposit returns in Scotland.