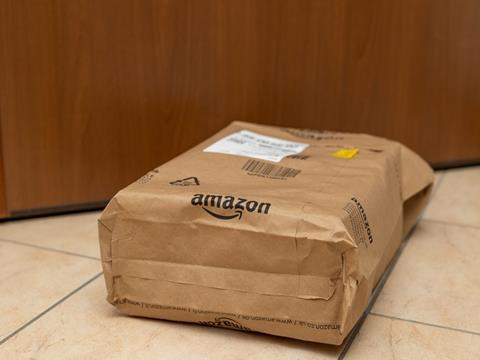 Amazon is aiming to stop using single-use plastics (SUP) for its outer packaging by the end of 2021 in Germany.

The company claims that its Germany logistic centres will phase out single-use plastic and transition to mostly flexible paper-based shipping bags when packaging both its own and third-party items ready for shipping. Some larger shipments may continue to be packaged in corrugated cardboard boxes.

Alongside this, the company is aiming to adapt the size of its packaging to better suit the product inside, again in a bid to decrease the amount of material used. Amazon’s Frustration Free Packaging (FFP) scheme, first introduced in 2019, has responded to consumer demand for less packaging waste and offers reduced void fill in favour of better fitted packaging without an additional box.

Amazon adds that it intends to ship more products in the original packaging in which it is sent to German logistics centres by simply attaching an address label. If the product is delivered to the company’s logistic centres in Germany from the manufacturer or a third-party in a suitable SUP bag, this will be sent on to the consumer, again to reduce the need for secondary and tertiary packaging materials.

Other exceptions include when Amazon thirty-party providers sent items directly to its customers; the company says it has no control over the outer packaging in such cases. Amazon Germany will allegedly add SUP to paper and cardboard packaging during certain weather conditions, such as heavy rain, to protect the package during transit and delivery.

In cases where it is considered necessary, Amazon Germany will also use plastic filling material – for example, bubble wrap to protect fragile glass items.

This year, Amazon expanded its FFP scheme in the U.S. to include smaller items and financial incentives for its vendors, which it reportedly has plans to roll out in Europe later this year. Amazon is also investing in companies offering sustainability-orientated innovations through its Climate Pledge Fund, which recently included CMC Machinery’s technologies that allow boxes to be fitted to specific items and auto-bagging systems.