A spoonful of sprinkles helps the (real) medicine go down 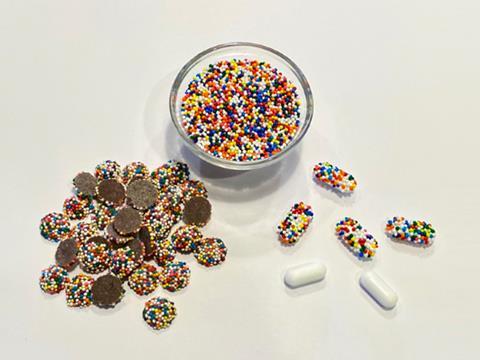 Counterfeit or substandard medicines adversely affect the health of millions of people and cost an estimated $200 billion annually. Their burden is greatest in developing countries, where the World Health Organization estimates that one in ten medical products are fake.

Professor William Grover from the University of California’s Riverside bioengineering facility has developed a simple addition to the existing drug manufacturing process that renders an edible, universally unique physical identifier to each pill, tablet or capsule.

If applied at random to a pill immediately after manufacture, the specific pattern they form is unlikely to ever be repeated by random chance. So, the ‘code’ can be used to uniquely identify the pill and distinguish it from all other pills, he shows.

By taking a photograph of each CandyCoded pill after manufacture and recording the location and colour of each, a manufacturer can construct a database containing the pattern of all known, authentic pills they produce.

A consumer can then simply use a smartphone to photograph a pill and transfer its image to the manufacturer’s server, which determines whether the pill’s CandyCode matches one in its database.

To demonstrate the feasibility of using random particles as universal identifiers, Glover performed a series of experiments using both real CandyCodes (on commercially produced chocolate candies) and simulated CandyCodes (generated by software).

He developed a simple method for converting a CandyCode photo to a set of strings for convenient storage and retrieval in a database. Even after subjecting the codes to rough handling, to simulate shipping conditions, they were still easily verifiable using a cellphone camera, he demonstrates.

A manufacturer could produce enough pills - 41 million for each person on Earth—and still be able to uniquely identify each CandyCode. By providing universally-unique IDs that are easy to manufacture and read but hard to counterfeit, require no alteration of the existing drug formulation and minimal alteration of the manufacturing process, these codes could play an important role in the fight against fraud in pharmaceuticals and many other products, he believes.

The experiments all used eight colours of sprinkles, but even more unique CandyCodes could be created with the introduction of more colours (he theorised 15 as an ideal number) or combining different sizes or shapes.

CandyCodes could also be used to ensure the authenticity of other products. An example cited by Glover is bottle caps, which could be coated with adhesive and dipped in the sprinkles to ensure the integrity of cosmetics or wine or even on hang tags.

Finally, it seems a further benefit may be that it makes the medicine taste better too – bring on Mary Poppins!

The open-access paper, CandyCodes: simple universally unique edible identifiers for confirming the authenticity of pharmaceuticals, can be read here.