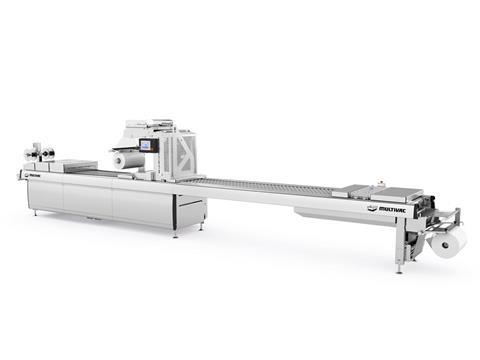 With its F 286 thermoforming packaging machine, MULTIVAC is launching a new model for producing vacuum and MAP packs for snack products.

The new machine has been developed in response to current demand in the market for snack packs, such as those for dried or roasted duck portions, beef jerky, small sausages or tofu, which great popularity – particularly in Asia.

The F286 can produce packs made from plastic films or aluminium, with aluminium packs being preferred in Asia, since they offer a long shelf life due to their protection against UV light.

Dominik Eberhard, team leader for product management at MULTIVAC, says: “Due to the worldwide demand for healthy snacks, we are also expecting great interest in this model from other regions. The F 286 is aimed particularly at smaller and medium-sized businesses, which want to get into thermoforming packaging for the first time, or alternatively to pack smaller batch sizes more flexibly.”

“The machine is also designed for processors, who package their products today in film pouches on rotating filling and sealing machines. By moving to thermoformed packs, they can avoid high pouch costs, as well as increasing their personnel efficiency.”

The F 286 was designed to produce thermoformed packs with a forming depth of up to 20 mm. With the optional upper web forming of 10 mm, the company says that it is possible to replace existing, symmetrically produced pouch packs.

Thanks to its loading area of up to 3,000 mm, which can be extended flexibly, MULTIVAC also says that it is possible to achieve high pack outputs, even though the machine can also be accommodated in confined working environments.

The unloading area can be extended to fit printing solutions or other equipment components, so that an inkjet printer or additional cutting unit can be integrated into the machine.

The F 286 achieves an output of up to 240 packs per minute. High and uniform sealing forces, combined with a high-performance forming station, reportedly ensure that the desired pack results are achieved even with aluminium packs.

The machine is constructed in the MULTIVAC Hygienic Design and offers access for cleaning and maintenance. Various equipment options enable the machine to be designed to the customer's individual requirements as regards output capability and the required printing or labelling process.