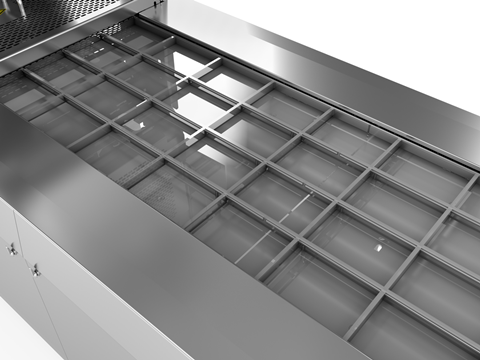 MULTIVAC says its new R3 thermoforming machine runs recyclable packaging films made of mono-materials without crease formation while offering a modular construction that is simple to move and maintain.

According to MULTIVAC, the R3 is designed to run the latest types of materials, such as recyclable and mono-material films, while being easily adaptable to a wide range of customer requirements for the food sector thanks to its modular construction.

Michael Landerer, product manager at MULTIVAC, says: “Our aim is to offer “best-fit” machine configurations to not only small and medium-sized companies, but also larger companies with tight budgets.

MULTIVAC adds that while recyclable mono-material films, such as APET or PP, can improve the environmental credentials of packaging, they can have a worse visual appearance. With thermoforming machines, this can mean slight waves at the edge of the pack.

Landerer explains: “In order to solve this problem, we have equipped the R3 with allover heating, which heats recyclable films very evenly.”

In addition to this, the chain guides for the web advance can be adjusted individually and can also be decoupled from the forces of the machine processes, according to the company. This reportedly means that the weight of the die set is borne entirely on the side frames so that no vibrations are transmitted to the film.

Landerer adds: “This enables us to achieve a constant web tension and consistently prevent waves at the edges of the pack. This therefore guarantees the optimum pack appearance with films made from mono materials such as polypropylene.”

The R3 consists of four stations: the forming station, the loading area, the sealing die and the cutting area. MULTIVAC explains that, at the first stage, the forming station makes the lower web formable through the effect of heat so that pack cavities for the product can be produced during the subsequent thermoforming process by means of compressed air and vacuum.

After the thermoforming process is complete, MULTIVAC says that the manual or automatic loading of the product into the pack cavities takes place. After loading, the lower web is apparently sealed hermetically to the upper web in the sealing die.

MULTIVAC adds that the final step is the severing of the individual packs from the strip packs in the web by means of cross-cutting units and a longitudinal cutter.

Landerer comments: “The R3 achieves a speed of twelve cycles per minute at its peak level and can therefore reach the output of high-end slicer lines.”

The company also claims that the R3 is designed to allow for minimal maintenance work. “The development team has reduced the number of moving parts to a minimum. In addition to this, lubricant is not used anywhere,” says Landerer. “The amount of maintenance work and the potential occurrence of faults are therefore very small.”

MULTIVAC says that even the changing of the sealing plate can be completed quickly when previously service technicians would often have to lift the complete top section of the die, which weighs around 100kg. The company’s solution apparently involves a lightweight sealing plate, at around 20kg, which can be removed from the top section by means of screws and pulled into the loading area.

According to Landerer: “The cooling water circuit in the top section remains unaffected. That is a huge benefit. It means that it is no longer necessary to drain the cooling water. A task, which in the past has not only cost time, but also involved a contamination risk.”

The company adds that the designers have reinforced the underside of the frame on the thermoforming machine, which reportedly makes it possible to lift the entire machine at a central point, for example, with a forklift. Landerer concludes: “Thanks to this reinforcement, it is possible to quickly alter the position of the machine in the event of any line changes.”