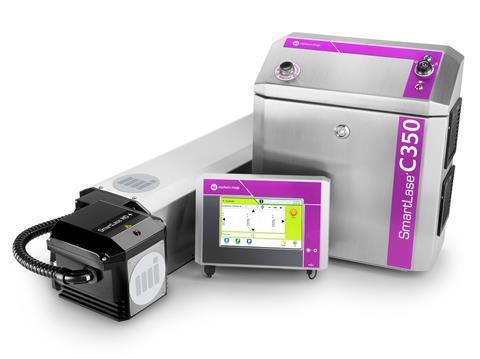 Markem-Imaje launches laser printer designed to save capital and operating expenditures by reducing number of lasers needed to print and score across a wide film web while increasing coding speed and uptime.

Stick packs and sachets are an increasingly common way of supplying single-serve portions of food and drink products to the food service industry and on-the go consumers. However, the triplex packaging film material can be challenging to code and score. Markem-Imaje addresses the variability of triplex packaging by offering the SmartLase C350HD+ in two wave lengths: 10.2 μm and 10.6 μm. This latest laser printer consumes less energy than competitors by reducing the number of lasers required to code multiple stick pack lanes. It also lasts longer and codes faster with less downtime than many competing lasers.

Now manufacturers only need 3 lasers to code 12 lanes of stick packs and 2 lasers for 10 lanes. As a result, the upfront acquisition costs are reduced. Thanks to its market leading 60,000 hours MTBF (mean time before failure), these printers need to be replaced less frequently, providing further CAPEX savings over the longer term.

‎Integration kits help the laser fit quickly and easily into a wide range of stick pack machines including Toyo, Mespack and Schmucker.

Proprietary Intelli’Cool® technology enables the lasers to operate at full capacity in the range from 5°C to 40°C, even at high application duty cycles with no adverse effect on quality and uptime.

By contrast, many competitor laser coders can only operate effectively at 40°C with application duty cycles limited to a maximum of 60% as they only have a single fan at the end of the laser and insufficient scanhead cooling.

Intelli’Cool thus means manufacturers can replace less energy efficient 50 or 60-watt laser coders which require mandatory water cooling above 35°C. Performance is also superior against competing lasers as indicated in the chart below.

In addition to coding, the laser can be used to precisely score stick packs, enabling significant savings on scoring blade maintenance costs and completely avoiding the downtime necessary for blade replacement.

“Our new SmartLase C350HD+ is a right-sized, cost-effective and energy efficient solution for wide web and stick pack coding and scoring. By reducing the number of lasers, our customers can reduce their CAPEX and OPEX while achieving better codes and higher OEE, critical when operating within the tight profit margins in this industry,” says Alex Koudriashov, Current Laser Product Marketing Manager at Markem-Imaje.