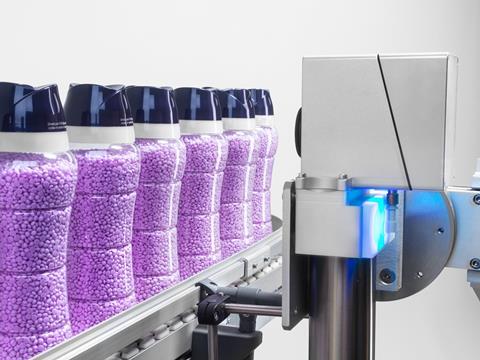 The SmartLase F250 is the first new product launched as a result of Markem-Imaje’s acquisition of laser coding and marking solutions specialist Solaris Laser.

According to Markem-Imaje, the SmartLase F250 is suitable for customers looking to adopt laser making solutions for product identification and packaging applications. The company adds that the laser printer is “ideal” for businesses seeking code quality at high speeds where space is at a premium.

The SmartLase F250 reportedly delivers chemical-free production, as well as reduces operational expenses through fewer line stoppages and by eliminating the requirement for ink.

In addition, Markem-Imaje says the SmartLase F250 controller, printhead and touchscreen user interface come with at least IP55 ingress protection level, apparently providing long and reliable operations in harsh, dusty, and humid conditions. The company adds that the printer comes Industry 4.0-ready with a range of industrial interfaces that enable its integration with plant automation and manufacturing execution systems.

Once integrated, SmartLase F250’s user interface allegedly delivers an increase of up to 20% in operating efficiency. The printer also features MIVA (Markem-Imaje Virtual Assistant), which helps to provide customers with remote troubleshooting, while the company adds that 24- or 48-hour on-site service level agreements (SLA) are available in most markets.

“The F250 is a printer designed with the future in mind. Fewer line stoppages and the fact it uses no ink can radically reduce OPEX, while the elimination of chemical components makes it ideal for companies who are looking to reduce their impact on the planet.”

Last year, Markem-Imaje introduced the SmartDate Xtreme Plus printhead application, which it says allows manufacturers to print codes with high resin thermal transfer ribbons at up to 600 millimetres per second.